A federal judge has given the Fish and Wildlife Service just 30 more days to make an overdue decision on whether to formally propose endangered species protection for a rare desert wildflower at the center of a fight over a proposed lithium mine in Nevada.

Conservationists say the rare order issued Wednesday in Las Vegas is a significant victory that underscores the critical condition of the Tiehm’s buckwheat, which they say is on the brink of extinction.

“The situation with the buckwheat truly is an emergency, and the judge recognized that,” said Noah Greenwald, endangered species director for the Center for Biological Diversity, which has been demanding protection of the plant since the listing petition was filed October 2019. 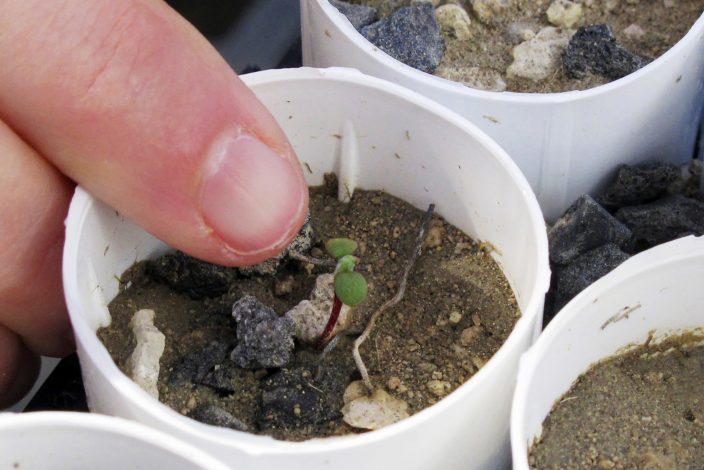 FILE - In this Feb. 10, 2020, file photo, a plant ecologist at the University of Nevada, Reno, points to a tiny Tiehm's buckwheat that has sprouted at a campus greenhouse in Reno, Nevada. A federal judge has given the Fish and Wildlife Service just 30 more days to make an overdue decision on whether to formally propose endangered species protection for a rare desert wildflower at the center of a fight of a proposed lithium mine in Nevada. Conservationists say the rare order issued Wednesday, April 21, 2021, in Las Vegas underscores the critical condition of the Tiehm's buckwheat they say is on the brink of extinction. (AP PhotoScott Sonner, File)

The agency was supposed to decide last October whether or not to propose protection under the Endangered Species Act. It had said staff and budgetary constraints would prevent it from deciding until Sept. 30, 2021.

On Wednesday, Judge James Mahan denied the center's bid to force the U.S. Fish and Wildlife Service to act on a subsequent emergency listing petition it filed last fall after an estimated 40% of the plant’s population was destroyed during an unprecedented catastrophic event federal officials blamed on rodents.

But Mahan said “more than enough time has passed” to complete the required year-long review. He ordered a decision be made within 30 days.

“By its own admission, FWS has violated the ESA by failing to issue a timely 12-month finding as to whether it intends to list Tiehm’s buckwheat as an endangered species,” he wrote in a 16-page order.

“This court finds no reason to grant additional time for FWS to make its admittedly overdue finding,” he said. “Defendants fail to persuasively argue that the 30-day deadline is impossible or infeasible."

The wildflower is found only on 10 acres (4 hectares) at Rhyolite Ridge where the Canadian mining company, Ioneer Ltd., wants to dig for lithium and boron on federal land about 220 miles (354 kilometers) southeast of Reno.

Ioneer Managing Director Bernard Rowe said the ruling “is not unexpected” and “in no way dictates an outcome of the FWS listing decision — it just requires them to propose a decision by a certain date.”

Ioneer has been committed from the beginning to “producing a first-class project that allows for the development of a critical supply of lithium, while also ensuring the protection” of the plant, Rowe said in a statement late Wednesday.

“We are confident that the science strongly supports the co-existence of our vital lithium operation and Tiehm’s buckwheat,” he said.

The Fish and Wildlife Service didn’t immediately respond to a request for comment on Thursday.

Mahan noted the U.S. Bureau of Land Management already has designated the plant as a sensitive species, and the state is considering listing as a ``fully protected species.”

Last July, the service concluded in a 90-day finding that was supposed to be completed in January 2020 that the center had provided “substantial information” indicating protection of the buckwheat “may be warranted.”

The center believes the destruction of nearly half of its remaining population between July and September was caused by humans. The government disagrees.

Mahan said that “although the exact cause of the destruction is uncertain, the parties do not dispute the ongoing and `alarming’ threat to the species.”

“The agency basically has to be forced to do their job. That's been the case for a long time now,” said Greenwald, who has been helping prepare such lawsuits for more than 20 years.

“Usually when we bring these `deadline’ suits, the Fish and Wildlife Service offers us a date and we agree and there’s a settlement. In this case, we felt there was such an emergency here, that immediate action needed to happen. We weren’t willing to settle for some date in the future,” he said.