David Pastrnak had a goal and two assists, and the Boston Bruins extended their winning streak to a season-best six games with a 5-1 victory over the Buffalo Sabres on Thursday night.

Brad Marchand, with his team-leading 25th, Nick Ritchie and David Krejci also scored for the Bruins. Pastrnak has two goals and eight assists over a five-game point streak. 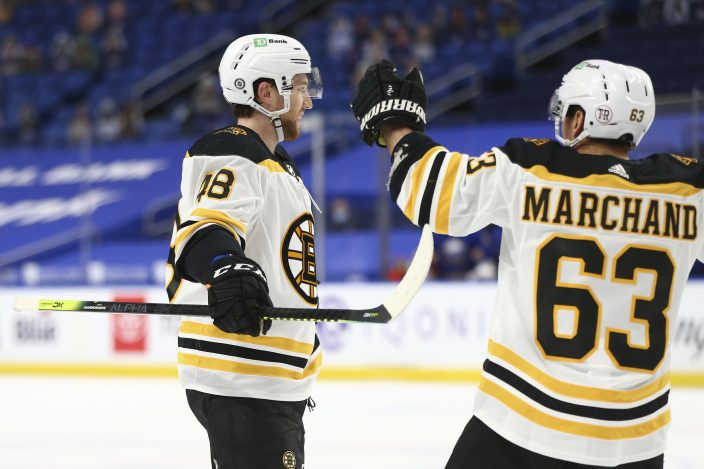 The winning streak coincides with the Bruins acquiring Taylor Hall and Curtis Lazar in a trade with Buffalo on April 12, and matches the team’s longest since a six-game run from Jan. 21 to Feb. 8 last season.

The Bruins are also on a 13-4-2 run that has propelled them into a tightly contested race for first place in the East Division. The day began with four points separating the first-place Washington Capitals and fourth-place Bruins.

Arttu Ruotsalainen scored for Buffalo, which has lost all five meetings against the Bruins this season, including a 2-0 loss on Tuesday. Dustin Tokarski struggled in finishing with 33 saves. 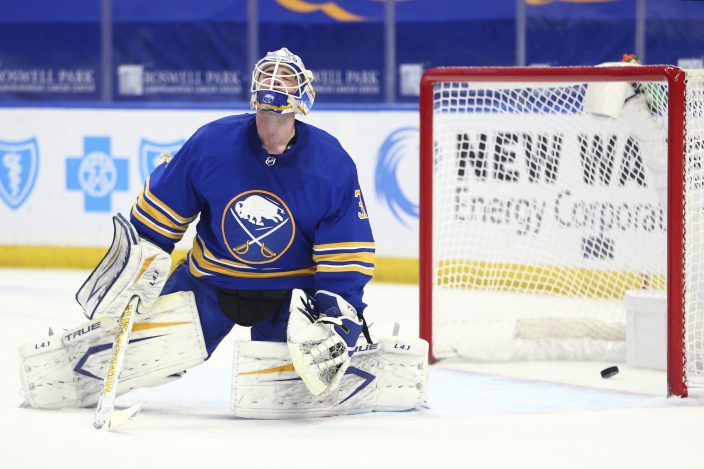 The teams conclude a three-game series in Buffalo on Friday night.

Grzelcyk’s goal came some 7 1/2 minutes after Ruotsalainen tied the game at 1 by tipping in Anders Bjork’s pass into the open left side. Pastrnak won a face off to the left of the Sabres net and the Bruins worked the puck to Grzelcyk at the right point, where his snap shot deflected off the stick of Buffalo’s Tobias Rieder, and knuckled in under Tokarski’s glove. 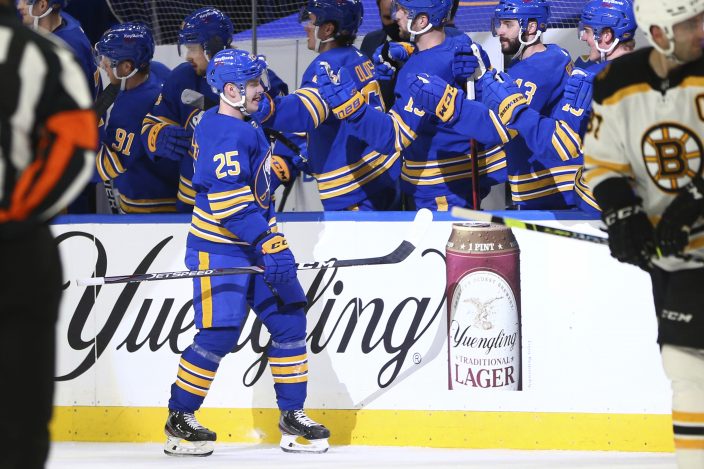 Buffalo Sabres forward Arttu Ruotsalainen (25) is congratulated after a goal during the second period of the team's NHL hockey game against the Boston Bruins, Thursday, April 22, 2021, in Buffalo, N.Y. (AP PhotoJeffrey T. Barnes)

The Bruins opened the scoring on Marchand’s goal at the 12:36 mark of an opening period in which they outshot Buffalo 14-7.

Mike Reilly’s shot from the left point struck the skate of Sabres defenseman Jacob Bryson in front, where he was battling for position with Patrice Bergeron. The puck landed on Marchand’s stick to the right of the net. He then flipped it in the open side before Tokarski could get across.

Pastrnak and Ritchie put the game away by scoring 66 seconds apart through the first six minutes of the third, with Krejci scoring with 1:58 remaining. 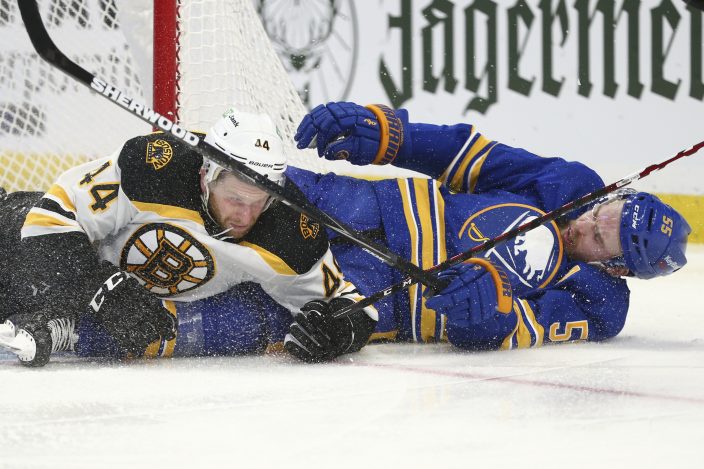 Buffalo was undone by a sputtering power play, which failed to convert five opportunities. The Sabres converted just five of 68 power-play opportunities over their past 30 games.

Bruins coach Bruce Cassidy revealed a number of Boston players received their vaccines immediately following their win at Buffalo on Tuesday. Cassidy wouldn’t say how many were vaccinated, while noting that was the reason he held an optional skate on Wednesday to give players a chance to rest. 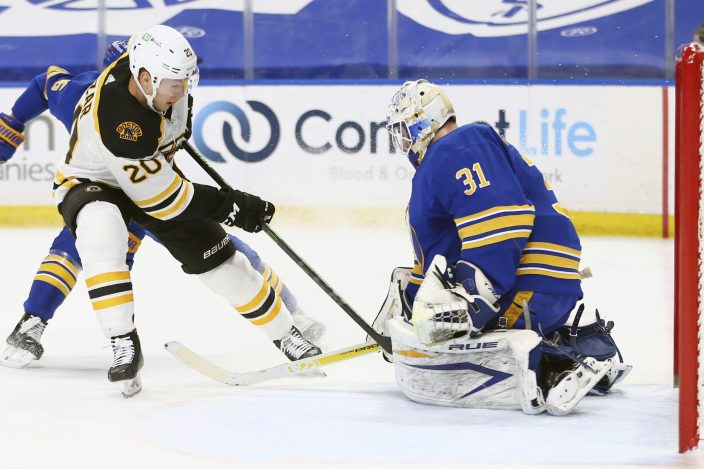 With a 32-save outing on Tuesday, Tuukka Rask joined Swayman and Jaroslav Halak to register shutouts this season for Boston. They represent the Bruins’ first trio to have shutouts in the same season since Rask, Tim Thomas and Manny Fernandez in 2008-09.

Sabres interim coach Don Granato noted how a lineup made up of mostly developing youngsters has made it easier to get across his message with the team out of playoff contention.

“If we had an older team and we were where we are in the standings, we would be doomed,” said Granato, who is 6-10-3 since Ralph Krueger was fired on March 17. “They’re kind of an open canvass in that regard. And as long as we keep them believing that there’s more to go after, we’re good. And that’s easy to show what the next challenge is for them.”

Bruins: D Kevan Miller is set to return on Friday after missing his fifth consecutive game with an undisclosed injury. ... Cassidy said RW Ondrej Kase is progressing, but there remains no timetable for his return. He’s been out since sustaining an upper body injury two games into the season.

Sabres: D Will Borgen returned after missing 32 games with a broken forearm. ... G Ukko-Pekka Luukkonen is scheduled to make his NHL debut Friday.

Nadal: Madrid loss a step backward ahead of French Open

Biden move to share vaccine designed to spread US influ ...

It won’t speed the manufacture of ...