For one of the first times in this young season, the New York Yankees played up to their payroll.

“Tonight we showed what we are," shortstop Gleyber Torres said after the Yankees shook off a rough first inning and rallied for a 6-3 win over the Cleveland Indians on Thursday night in the opener of a four-game series. 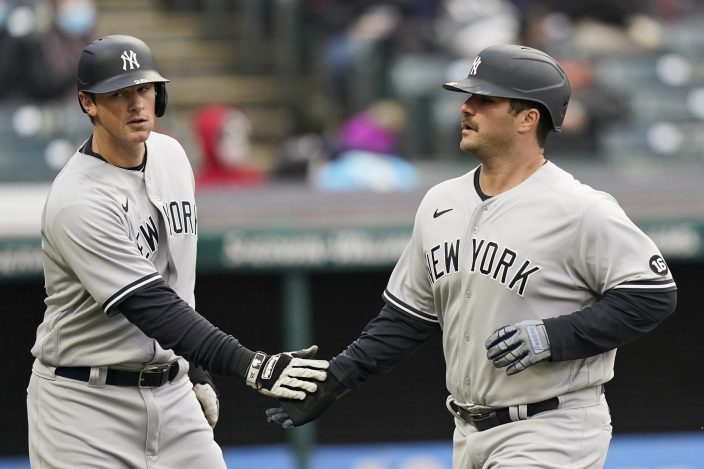 New York Yankees' DJ LeMahieu, left, and Mike Ford celebrate as they score in the third inning of a baseball game against the Cleveland Indians, Thursday, April 22, 2021, in Cleveland. (AP PhotoTony Dejak)

Rougned Odor's two-out, two-run single broke a seventh-inning tie — and maybe jarred New York from its hitting funk — as the Yankees won for the second time in eight games and at least temporarily eased concerns of their passionate fans.

“We've kind of been searching for that hit for a while now,” manager Aaron Boone said of Odor's clutch single. “To deliver it there was huge. Just a huge hit for us.”

Odor was batting just .107 and in a 3-for-28 slide when he came up against Nick Wittgren (0-1) in a 3-3 tie. He slapped his single through the middle to score Aaron Judge and Torres as the Yankees recovered from a 3-0 deficit in the first. 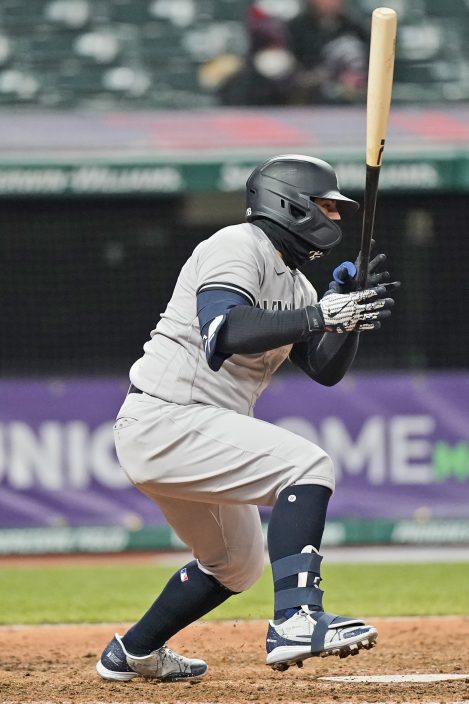 Kyle Higashioka homered in the eighth for New York, which entered with its worst record to open a season since 1991, when Stump Merrill managed and Don Mattingly manned first base.

Domingo Germán (1-2) returned from a demotion to the alternate training site and shook off his own error in the first to last six innings. The right-hander won for the first time since serving a suspension under baseball's domestic violence policy that started in September 2019 and ended his season with an 18-4 record. 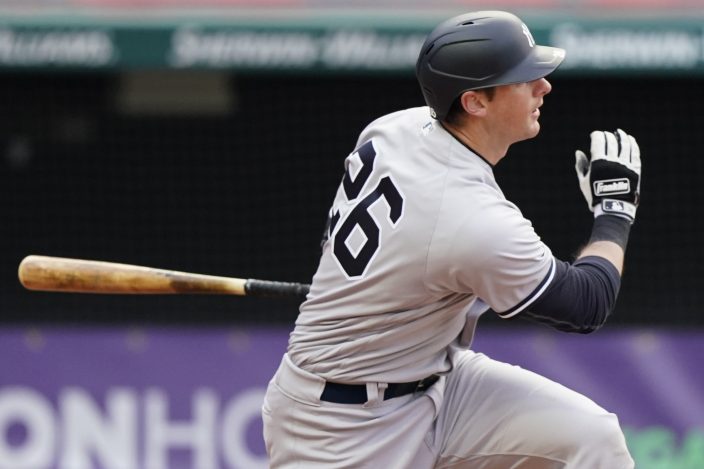 Jonathan Loaisiga and Chad Green combined for two innings of relief, and Aroldis Chapman struck out the side around a walk in the ninth for his third save.

Torres picked up three hits, one night after he was criticized for not running hard on a groundout in the seventh inning of a loss to Atlanta. Boone met with Torres afterward, and came away satisfied the 24-year-old cared. 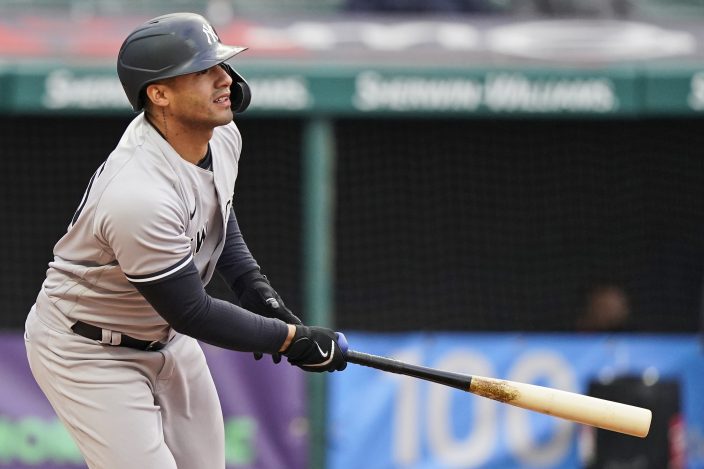 “I care a lot about my team,” Torres said. “It wasn't about last night. Tonight, I just played my game and tried to help my team win.”

The Yankees came in batting an AL-worst .205, embarrassing for a team loaded with talent and boasting a $200 million payroll. Boone tweaked his lineup — and rested struggling sluggers Giancarlo Stanton and Gary Sánchez — in hopes of sparking his team.

He was pleased with the results as the Yankees were patient at the plate, drawing a season-high nine walks and putting runners on base. New York scored its most runs since April 11 and had its most hits since April 7. 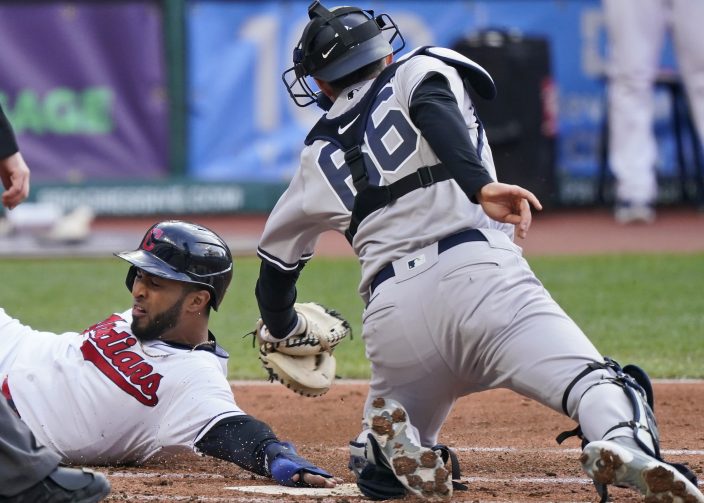 The Indians, who lost to New York in last season's wild-card round, have dropped four of five and soured manager Terry Francona's 62nd birthday.

Cleveland's pitching has been solid all season, but the Yankees made starter Aaron Civale work hard and the Indians didn't throw enough strikes. 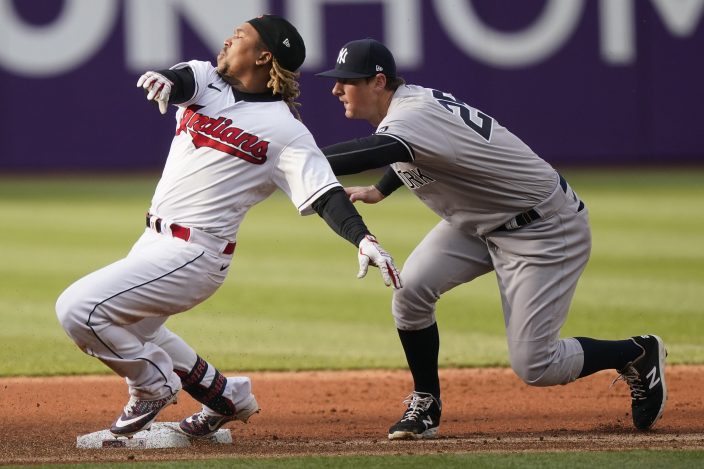 Cleveland Indians' Jose Ramirez, left, is safe at second base with a double as New York Yankees' DJ LeMahieu is late on the tag in the first inning of a baseball game, Thursday, April 22, 2021, in Cleveland. (AP PhotoTony Dejak)

“Kind of staff-wide tonight, uncharacteristically,” Francona said. "Guys are usually pretty good about pounding the zone, and they will be. It hurt us tonight.”

Germán didn't look as if he'd be around for long after giving up three runs in the first — when he dropped a comebacker that could have gotten him out of the inning. But he settled in and held the Indians scoreless on two hits over the next five innings.

New York Yankees' Brett Gardner, left, tries to catch a ball hit by Cleveland Indians' Cesar Hernandez in the first inning of a baseball game, Thursday, April 22, 2021, in Cleveland. Gardner could not hold onto the ball for the out and Hernandez was safe with a single. (AP PhotoTony Dejak)

Francona spent eight seasons in Boston, where he lived and breathed the Yankees-Red Sox rivalry.

And although the Bronx Bombers were in town, Francona said their visit doesn't make him nostalgic about those days. 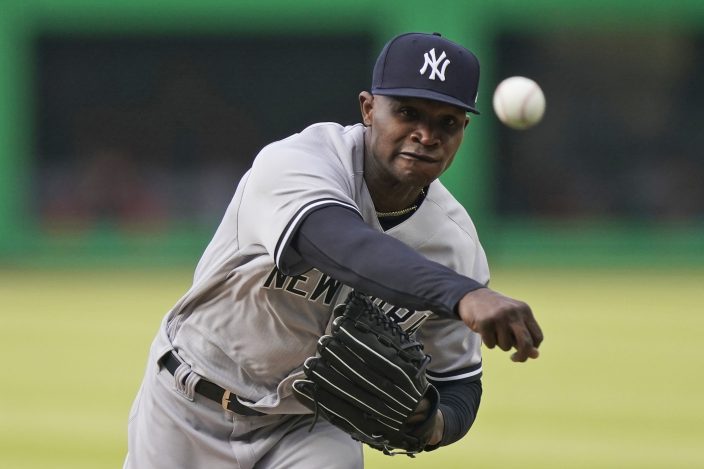 “I’ve been here nine years now and I can barely remember last week, so no,” he said, smiling. “It was different people. I got enough going upstairs in my brain without overloading.”

Not known for his speed, Indians DH Franmil Reyes got his first career triple in the third. 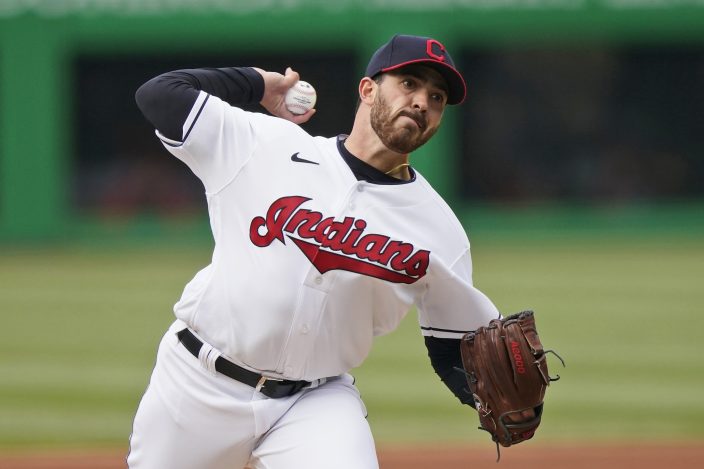 Reyes hit a shot into the gap in left-center and slid in for his first three-base hit in his 1,136th plate appearance.

Yankees: 3B Gio Urshela was not in the lineup after his back tightened up during Wednesday's loss. Boone said he was available only in an emergency, but expects him to return Thursday. ... Boone said 1B Luke Voit continues to progress and could be back in the next few weeks after knee surgery. Voit will begin taking batting practice next week in at the alternate site in Scranton. He led the majors in homers last season and Boone said the club misses his clubhouse presence.