The rising numbers are severely straining the supply of hospital beds and ICU capacity.

The record number of new infections came a day after a new daily high of seven deaths was announced. Four more deaths were announced Friday, bringing Thailand's total to 121. 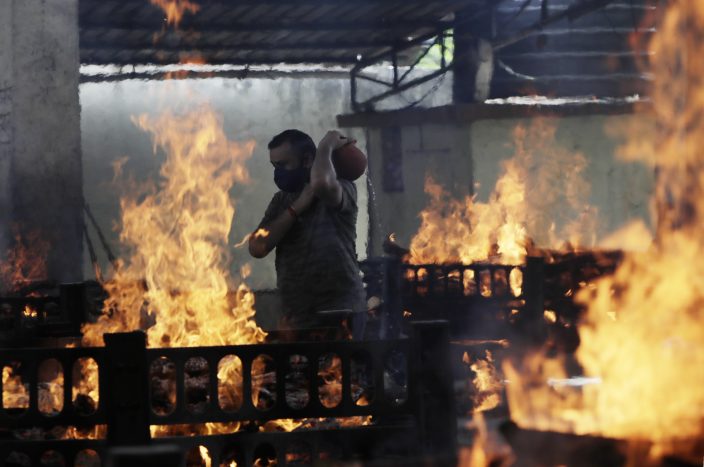 A relative performs final rituals by the funeral pyre of a COVID-19 patient who died when a fire broke out in Vijay Vallabh COVID-19 hospital, at Virar, near Mumbai, India, Friday, April 23, 2021. A fire killed 13 COVID-19 patients in a hospital in western India early Friday as an extreme surge in coronavirus infections leaves the nation short of medical care and oxygen. (AP PhotoRajanish Kakade)

At the beginning of March, Thailand had 26,031 cases with double-digit daily increases, but a new outbreak sent the numbers skyrocketing.

Taweesilp Visanuyothin, a spokesman for the Center for COVID-19 Situation Administration, said Bangkok, with the highest number of cases, has only 69 empty ICU beds left out of a total of more than 400. He said that is enough for the next six to eight days according to the projected demand of 10-13 additional ICU beds per day. Nationwide demand, forecast at 52 ICU beds per day, would use up the capacity in 19 days, he said.

Under Thai law, infected patients must be held in hospital facilities, but even with the addition of field hospitals there are not enough beds. There are 19,873 people in hospitals and field facilities nationwide, but in some areas that are short of beds, infected people are isolating at home. 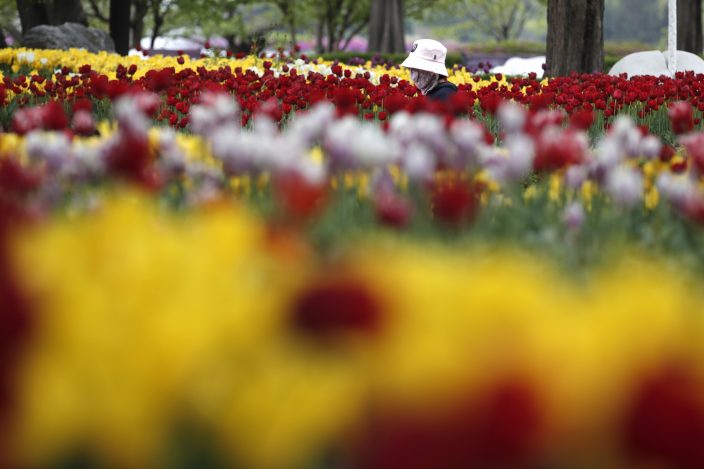 A visitor wearing a face mask as a precaution against the coronavirus walks near a field of tulips at a park in Goyang, South Korea, Friday, April 23, 2021. (AP PhotoLee Jin-man)

— India is putting oxygen tankers on special express trains as major hospitals in New Delhi begged on social media for more supplies to save COVID-19 patients who are struggling to breathe. More than a dozen people died when an oxygen-fed fire ripped through a coronavirus ward in a populous western state. India’s underfunded health system is tattering as the world’s worst coronavirus surge wears out the nation, which set another global record in daily infections for a second straight day with 332,730. The situation was worsening by the day with hospitals taking to social media pleading with the government to replenish their oxygen supplies and threatening to stop fresh admissions of patients. The government has started running Oxygen Express trains with tankers.

— Japan is set to issue a third state of emergency for Tokyo and three western urban prefectures amid skepticism it will be enough to curb a rapid coronavirus resurgence ahead of the Olympics in July. The emergency for Tokyo, Osaka and its two western neighbors Kyoto and Hyogo would last from April 25 through mid-May. It is largely intended as a short, intensive step to stop people from traveling and spreading the virus during the “Golden Week” holidays. But experts and local leaders have said tougher measures are needed in the face of the rapidly spreading virus, limited vaccinations and public fatigue.

— The Australian west coast city of Perth will lock down for three days after a returned traveler was apparently infected with the coronavirus while in hotel quarantine. Western Australia state Premier Mark McGowan said on Friday masks will also become compulsory in the city of 2 million people for three days from midnight. “I know this is hard to take and I wish we didn’t need to be doing this. But we can’t take any chances with the virus, we just can’t,” McGowan told reporters. The cause of concern was a 54-year-old man who arrived in Perth on April 3 on a flight from China and went into mandatory 14-day hotel quarantine. A couple from India on the same floor of the hotel were infected with a virus variant identified in that country as more contagious. The variant spread to a mother and daughter from Britain who shared a room across a corridor.

— China says three of its citizens working in the United Arab Emirates tampered with the results of their coronavirus tests required to return home. The Chinese Embassy said the three, working in the main business center of Dubai, altered information provided by local clinics to show they had not been infected. It said they were referred to UAE authorities for “seriously interfering with the prevention of epidemics and posing a significant risk to the health and safety of other passengers on the same flight.” China has largely stamped out domestic infection but continues to report citizens arriving from abroad who test positive for the coronavirus. That comes despite demands that travelers prove they are virus-free, leading to speculation that test results are being falsified by citizens desperate to return home. China reported 19 new cases on Friday, all of them brought from overseas and most arriving in the major travel hubs of Shanghai and Guangdong.

— A Norwegian climber became the first to test positive for COVID-19 at Mount Everest's base camp. Erlend Ness said he was confirmed infected and flown to Kathmandu. A mountain guide warned that the virus could spread among the hundreds of other climbers, guides and helpers who are now camped at the base of Everest if all of them are not checked immediately. He says any outbreak could prematurely end the climbing season ahead of a window of good weather in May.

— Authorities in Sri Lanka have imposed lockdowns on several villages and postponed the reopening of state universities amid a sharp increase of COVID-19 cases. The government said a small town and a village in the Kurunegala district, about 100 kilometers northeast of Colombo, were placed on lockdown. The local Lankadeepa newspaper reported five other villages in the area have been isolated. Separately, the Education Ministry said the reopening of state-run universities will be postponed by another two weeks based on instructions from the health department. They had been scheduled to reopen April 27 after several months of being closed. The number of positive cases rose to 672 on Thursday, pushing the nation’s total to 98,721 people infected with 634 fatalities.