Prime Minister Justin Trudeau said Friday Canada has reached an agreement with Pfizer for 35 million booster shots next year and 30 million in 2023 in case the effectiveness of COVID-19 vaccines fades with time and need to be reinforced.

He said the country of 38 million also has options for tens of millions more in future years should they be needed. He said the government is talking with other vaccine manufacturers about their plans for booster shots, too.

The vaccines are so new that experts don't yet have firm data on how long their protection will last, or if they will be affected by emerging variants of the virus. 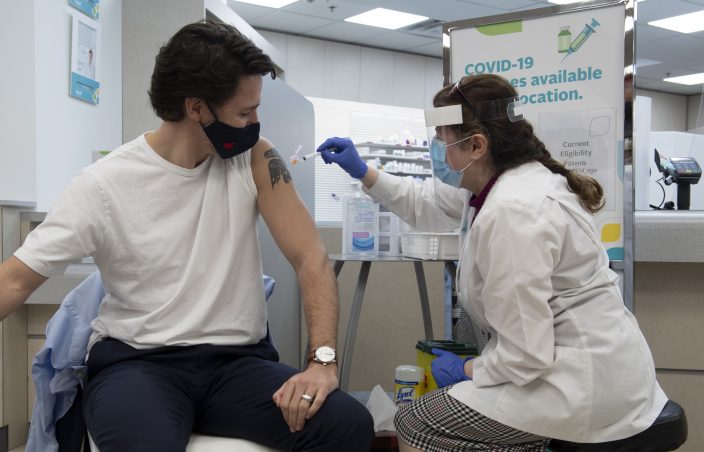 “Canadians expect us to be ready for whatever happens. There is certainly a hope that booster shots might not be necessary, but we are much better to ensure that we are prepared in case they are,” Trudeau said at news conference in Ottawa.

Trudeau made the announcement shortly before he and his wife Sophie were scheduled to receive the AstraZeneca vaccine that some people have been reluctant to get because of reports of rare blood clots.

The province of Ontario recently dropped eligibility for AstraZeneca for people 40 and above.

The prime minister says 30% of eligible adults in Canada have received at least one vaccine. All eligible Canadians are expected to be able to get at least one dose by the end of June.

Vaccinations have ramped up in Canada, but health experts say more-contagious variants and mistakes by the most populous province, Ontario, have contributed to a third wave of infections there. Ontario reported more than 4,500 new cases on Friday.

Canada banned all flights from India and Pakistan on Thursday after saying that half the people who testing positive for the new coronavirus after arriving in Canada by airplane came from that region. India set a global record in daily infections for a second straight day with 332,730.

Solicitor General Mike Farnworth, who is also the minister of public safety, said the order forbids recreational travel between the districts, but allows trips for essential reasons such as school, work, health care or commercial transportation.

Major League Soccer is launching a ...

Memphis Depay scored one, he set u ...

Ontario allows for golf and announces a staged reopening