Chelsea has made a significant move in the English Premier League's frenetic race to qualify for the Champions League, a competition the club's hierarchy secretly tried to destroy in its ill-fated attempt to form a European Super League.

A 1-0 win at West Ham, coupled with Liverpool conceding a stoppage-time goal to draw with lowly Newcastle 1-1 at Anfield, saw Chelsea open up a gap to its two main rivals for a top-four finish on Saturday.

With five games remaining in the league, Chelsea occupies the fourth and final Champions League qualification place — three points ahead of West Ham and four clear of sixth-placed Liverpool. 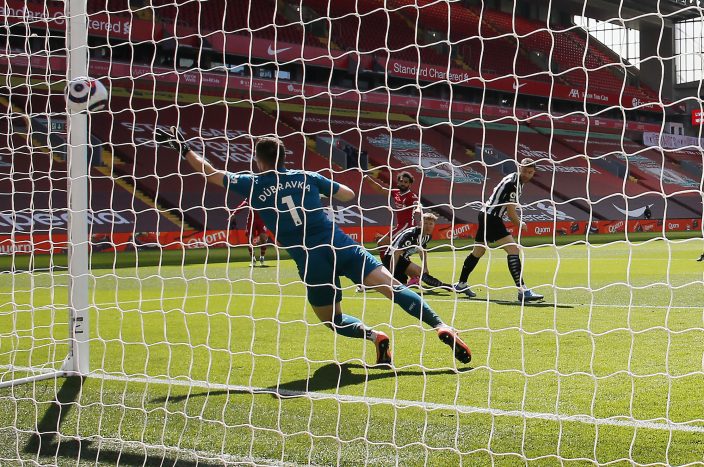 “It was a six-pointer," said Chelsea manager Thomas Tuchel, whose team's packed end to the season also includes an FA Cup final against Leicester and a Champions League semifinal against Real Madrid.

A smiling Tuchel congratulated each of his players on the field after the final whistle at the Olympic Stadium, a contrast to the reaction of Liverpool counterpart Jurgen Klopp after a dramatic finish at Anfield when his team's season-long vulnerability in defense proved costly again.

Joe Willock's deflected goal in the fifth minute of injury time has left Liverpool a big outsider to finish in the top four of a league it won by 18 points last season.

“I didn’t see that we deserved today playing Champions League next season,” a deflated Klopp said. “We learn, or we don’t play Champion League.”

A failure to reach the Champions League — and all the riches that come with it — will be painful for a club whose American ownership, Fenway Sports Group, was one of the key instigators in the scheme to set up the breakaway Super League.

That would have seen 12 of the continent's biggest clubs create a 20-team rival to the Champions League with finances dwarfing the current elite competition, and Liverpool's place locked in courtesy of it being a founder member.

How galling, then, that the Reds could yet end up in next season's Europa League — or not playing European competition at all.

In Liverpool's favor is a benign schedule that sees Klopp's team finish its league campaign with games against Southampton, West Bromwich Albion, Burnley and Crystal Palace — teams placed 13th or lower. Before that, though, is a trip to fierce rival Manchester United next week, a match that will be marked by protests owing to both clubs' American owners' attempts to create the Super League.

There were fan protests outside both of the teams' stadiums on Saturday.

Brighton visited Sheffield United in the late game, looking for a win to move 10 points clear of the relegation zone.