Lille showed why it is a French title contender to be reckoned with after coming back from 2-0 down to win 3-2 at rival Lyon on Sunday, reclaiming first place from Paris Saint-Germain by one point with four games left in a thrilling race.

Lille looked to be heading for only its fourth defeat of the season after forward Islam Slimani fired fourth-place Lyon ahead, and central defender Jose Fonte put through his own net in a one-sided first half.

But veteran striker Burak Yilmaz showed just why he scored nearly 200 goals in Turkish soccer with two goals, either side of setting up Canada forward Jonathan David. Yilmaz struck the winner in the 85th minute after countryman Yusuf Yazici headed a pass into his path and he finished confidently past goalkeeper Anthony Lopes.

“We knew it wasn’t over at 2-0 down, even if it was difficult,” David said, “Our strength is teamwork. These wins prove we can go all the way.”

Lyon had dominated the first half. 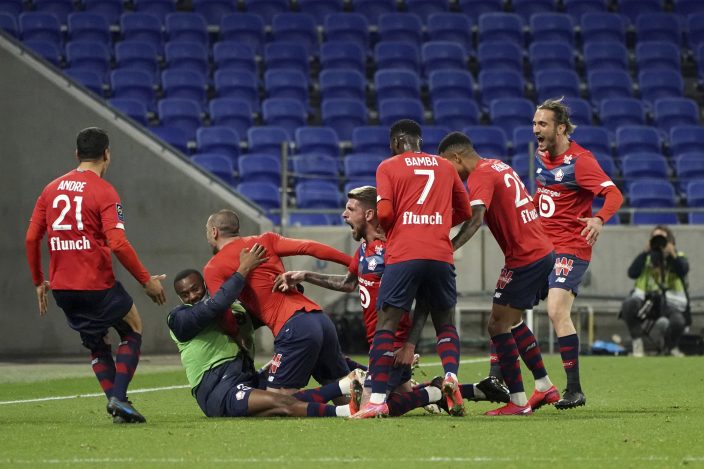 Lille's Burak Yilmaz, third left, celebrates with his teammates after he scored a goal against Lyon during their French League One soccer match in Decines, near Lyon, central France, Sunday, April 25, 2021. (AP PhotoLaurent Cipriani)

Slimani was put through by Memphis Depay but his lob over goalkeeper Mike Maignan was a little too high and landed on top of the net.

He made up for it three minutes later when he met midfielder Maxence Caqueret's fine cross from the right and clipped the ball into the top corner.

Lille thought it had equalized midway through the first half when David slid to score from Yilmaz's cross, but a replay ruled that Yilmaz was offside when breaking from the halfway line. 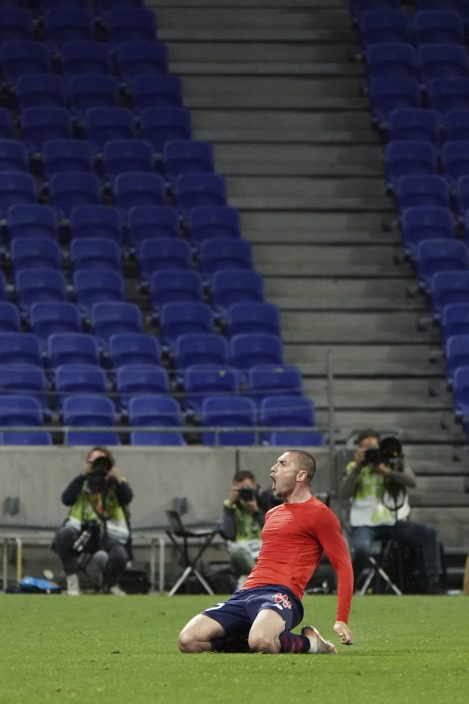 Lille's Burak Yilmaz, left, celebrates after he scored a goal against Lyon during their French League One soccer match in Decines, near Lyon, central France, Sunday, April 25, 2021. (AP PhotoLaurent Cipriani)

Maignan has been the league's best goalkeeper with PSG's Keylor Navas but badly misjudged a free kick from the right in the 35th, leading to an own goal as the ball drifted over Maignan and bounced off Fonte.

Yilmaz netted a 25-meter free kick just before the break and then broke down the left to set up David for 2-2 in the 60th.

Earlier, Wissam Ben Yedder scored with a superb finish as third-place Monaco won 1-0 at Angers to stay one point behind PSG. 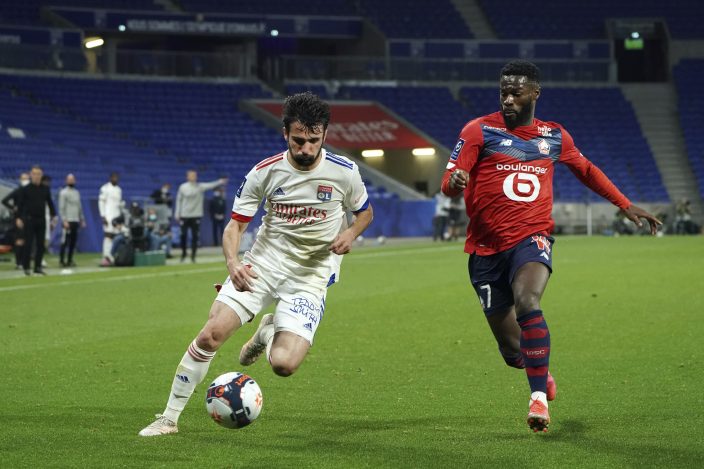 The France striker latched onto a pass from midfield and expertly dinked the ball over onrushing goalkeeper Paul Bernardoni in the 79th minute for his 18th league goal of the season.

“It's good that we won this game, it was difficult,” Ben Yedder said. “We know we're in the final sprint now. Some people are saying we will finish as champions, but we'll take what we can. Every match will be hard.”

Forward Stevan Jovetic had an early chance saved by Bernardoni and then limped off injured after 16 minutes. He was replaced by Ben Yedder, who is being cleverly used as a substitute in recent game s by coach Niko Kovac, regardless of his status. 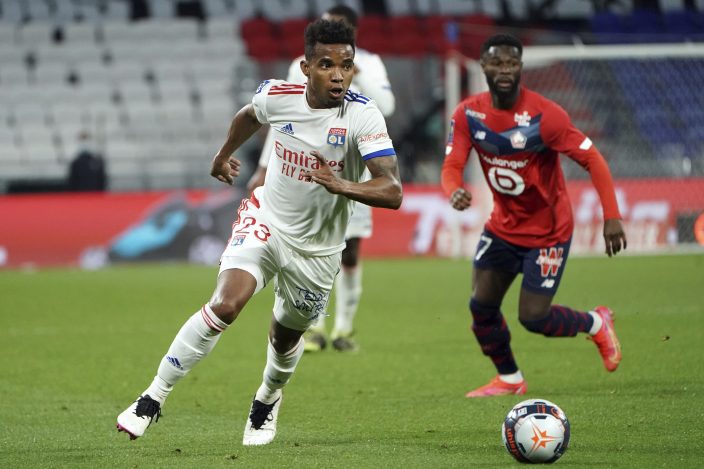 “Whether I start the game or not, the important thing is to play collectively and help the team out," Ben Yedder said.

Monaco has lost only once in 23 games overall

PSG won 3-1 at Metz on Saturday with Kylian Mbappe scoring twice to take his league-leading tally to 25.

Rennes has been transformed under new coach Bruno Genesio and beat last-place Dijon 5-1 at home for a fifth win in six games since he took charge.

The defeat relegated Dijon but seventh-place Rennes maintained its drive for fifth and a Europa League spot next season.

But Lens holds that place and is two points ahead of Rennes after winning 2-1 at home to 19th-place Nimes.

Nantes moved over Nimes and into 18th position with a 2-1 win at Strasbourg.

The day after around 1,000 protesting fans called for a leadership change at the financially troubled club, the players collapsed on the field in a 4-1 defeat at Lorient.

Bordeaux is in 16th place, one spot above Lorient, with both aiming to stay clear of 18th and the promotion-relegation playoff.

Montpellier's 15-game unbeaten league and French Cup run came to an end with a 3-1 defeat at Nice.

Eighth-place Montpellier hit the crossbar after 37 seconds and took the lead in the second minute when Andy Delort set up strike partner Gaetan Laborde to head home.