Cameron Smith and Marc Leishman outlasted Louis Oosthuizen and Charl Schwartzel to win the Zurich Classic in a playoff that capped a tight and tense final round Sunday.

Smith and Leishman won with a par on their second trip up the par-5 18th after Oosthuizen pushed his tee shot into the water and missed an 11-foot par putt.

The Australians forced the playoff by shooting a 2-under 70 in alternate-shot play at the PGA Tour’s lone regular-season team event. Oosthuizen and Schwartzel, a shot ahead entering the day, but the shot a 71. The South Africans had three pars and two bogeys. 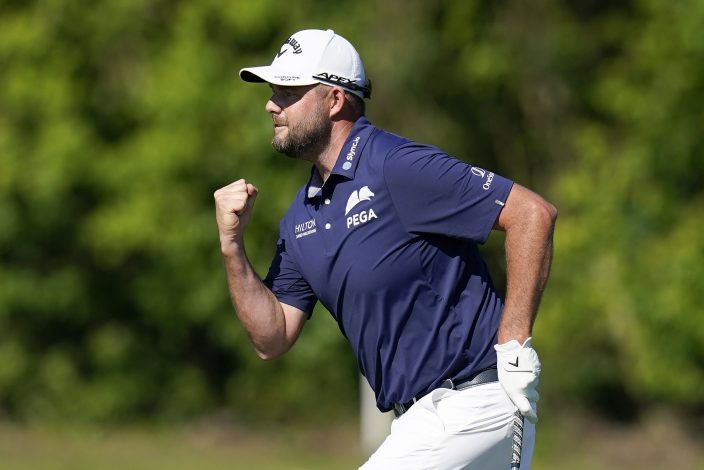 Marc Leishman, of Australia, reacts after making a putt on the 16th green during the final round of the PGA Zurich Classic golf tournament at TPC Louisiana in Avondale, La., Sunday, April 25, 2021. (AP PhotoGerald Herbert)

It was Leishman’s sixth career victory, his best result since tying for fifth at the Masters this month and his first win since the 2020 Farmers Insurance Open.

They finished regulation at 20 under.

Peter Uihlein and Richy Werenski shot a 67, with six birdies and one bogey, to shoot up the leaderboard from 18th to third.

South African left-hander Garrick Higgo won the Gran Canaria Open for his second European Tour title, closing with his second straight 7-under 63 for a three-stroke victory.

The 21-year-old Higgo finished at 25-under 255 at Meloneras Golf Course in the Canary Islands. He also won the Portugal Open last season.

Germany's Maximilian Kieffer was second after a 62.

The 32-year-old former Florida player closed with a 7-under 64 to finish at 23-under 261 at Texas Rangers Golf Club, a stroke ahead of Dallas resident Theo Humphrey (70).