BIDEN-100 DAYS-VIRUS — President Joe Biden spent his first 100 days encouraging Americans to mask up and stay home to slow the spread of COVID-19. His task for the next 100 will be to encourage the opposite behavior and manage the nation’s transition back to normalcy. By Zeke Miller. SENT: 900 words, photos. UPCOMING: 990 words after 1:15 p.m. speech.

Residents socially distance on a soccer field as they stand with bags of food donated by the local NGO "G10 Favelas," amid the COVID-19 pandemic in the Capao Redondo area of Sao Paulo, Brazil, Monday, April 26, 2021. (AP PhotoAndre Penner)

VIRUS-OUTBREAK-ASIA — India recorded more than 320,000 new cases of coronavirus infection as a grim surge of illness and death weighed on the country and its sinking health system started getting much-needed support from foreign nations. SENT: 960 words, photos. With VIRUS-OUTBREAK-THE-LATEST.

VIRUS OUTBREAK-AFRICA-VACCINE ROLLOUT — Some Africans are hesitating to get COVID-19 vaccines amid concerns about their safety, alarming public health officials as some countries start to destroy thousands of doses that expired before use. Malawi and South Sudan in recent days have said they will destroy some of their doses, a concerning development on a continent where health officials have been outspoken about the need for vaccine equity as the world’s rich nations hold the bulk of shots. By Rodney Muhumuza. SENT: 990 words, photos.

2020 CENSUS-TAKEAWAYS — The first batch of once-every-decade Census data shows a United States where the population is growing less quickly and shifting more to the South and West. By Nicholas Riccardi. SENT: 1,080 words, photos. With 2020 CENSUS — U.S. marks slowest population growth since the Depression; 2020 CENSUS-GLANCE. 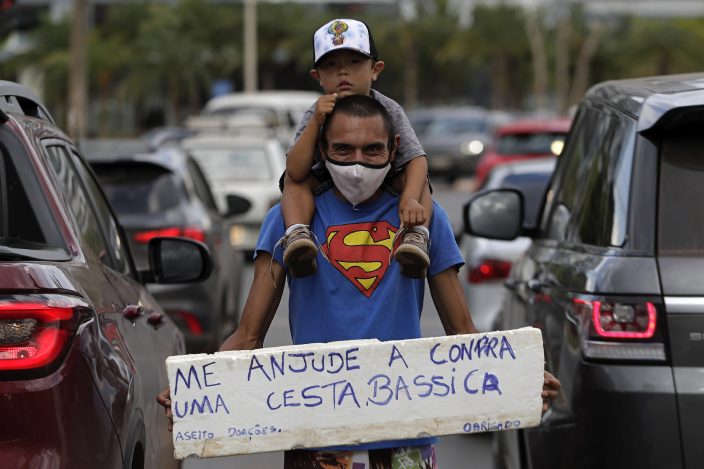 Jeferson Alves, 35, carries his 3-year-old son Jonathan Miguel on his shoulders when asking for a handout, as he holds a sign written in Portuguese that reads "Help me buy a basic food basket. Thank you," on an avenue in Brasilia, Brazil, Monday, April 26, 2021. Alves says he worked at a construction company for two years and that at the end of last year he was fired because of the pandemic. Now he seeks donations and money on the streets to support his family. (AP PhotoEraldo Peres)

BIDEN-100 DAYS-CONGRESS-DECORUM — On Capitol Hill, trust between the parties, and between Congress members themselves, has cratered as Biden prepares to address the House and the Senate for the first time in his presidency. By Mary Clare Jalonick and Josh Boak. SENT: 1,030 words, photos. With BIDEN-100 DAYS-CONGRESS-SECURITY — Biden’s first address to Congress is invite-only. Also see BIDEN-CONGRESS below.

AFGHANISTAN-ISLAMIC STATE — America is winding up its longest war, calculating that the terror threat out of Afghanistan can’t reach to its shores and that threats to the West by militants can be defused from a distance. But analysts who chronicle the Islamic State terror group say that in recent months they have re-emerged with a campaign of targeted killings. By Kathy Gannon. SENT: 1,050 words, photos. 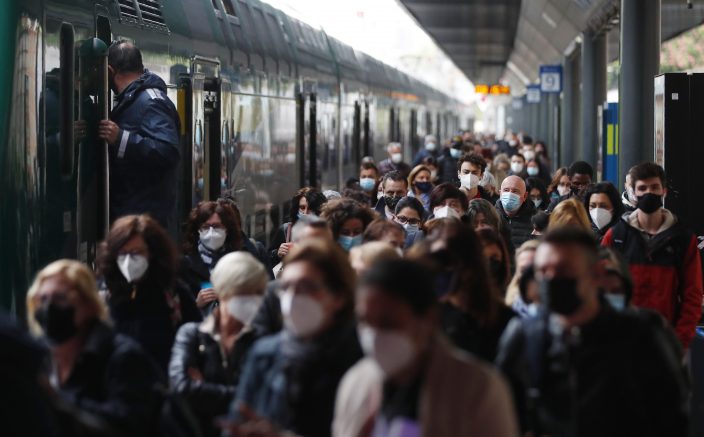 Commuters wearing face masks to curb the spread of COVID-19 walk on the platform after getting off a regional train at the Cadorna railway station in Milan, Italy, Monday, April 26, 2021. Italy is gradually reopening on Monday after six months of rotating virus lockdowns. (AP PhotoAntonio Calanni)

IDAHO-LAWMAKER-RAPE-COMPLAINT — Idaho lawmaker accused of rape was warned about his behavior. SENT: 840 words. 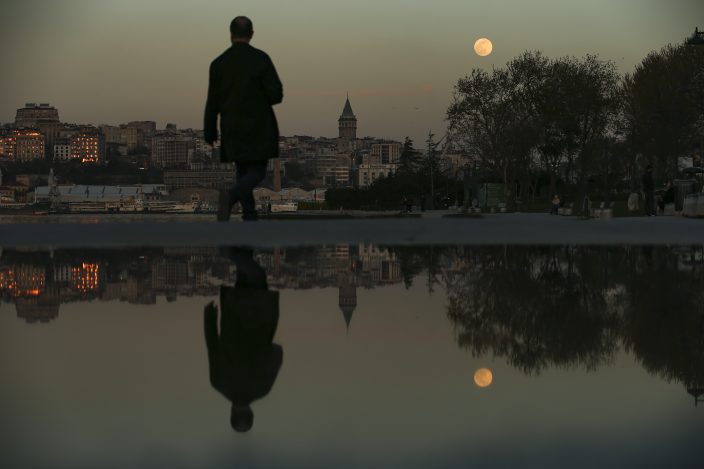 People walk in central Istanbul, Monday, April 26, 2021. Turkey's president Recep Tayyip Erdogan has announced the country's strictest pandemic restrictions so far, closing businesses and schools and limiting travel for nearly three weeks starting Thursday to fight a surge in COVID-19 infections and deaths. Turkey had so far instituted partial lockdowns to curb infections and to keep the economy running as it faces a significant economic downturn.The measures will be in place until May 17. (AP PhotoEmrah Gurel)

VIRUS-OUTBREAK-HUNGARY-CIRCUS — Human and four-legged performers alike are preparing to bring Hungary’s largest traveling circus back on the road after the COVID-19 pandemic halted its shows for more than a year. SENT: 450 words, photos.

VIRUS-OUTBREAK-CALIFORNIA-VACCINE — A San Francisco Bay Area man in his 30s is recuperating after developing a rare blood clot in his leg within two weeks of receiving the Johnson & Johnson vaccine, University of California, San Francisco officials say. SENT: 360 words, photo. 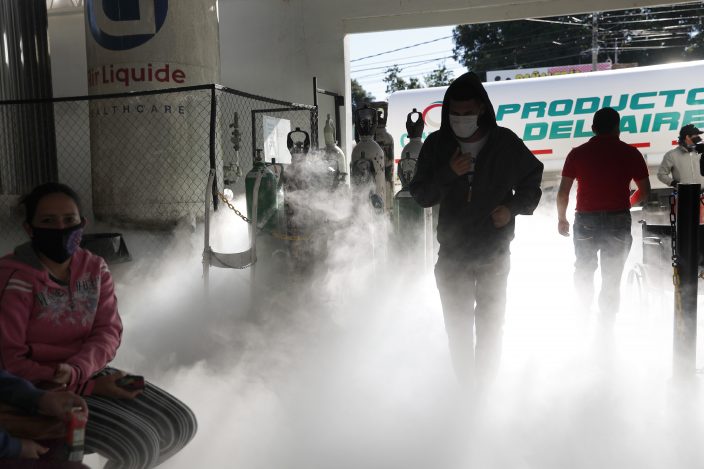 People walk through vapor created by the refilling of a large tank of liquid oxygen at the entrance to the COVID- 19 section of the Villa Elisa Hospital in Villa Elisa, Paraguay, Monday, April 26, 2021. (AP PhotoJorge Saenz)

BIDEN-CONGRESS — Ahead of Biden’s address to Congress, lawmakers are intensifying the push to make sure key priorities, including child care, health care and education, are included in next phase of his massive infrastructure reinvestment program. SENT: 910 words, photos. 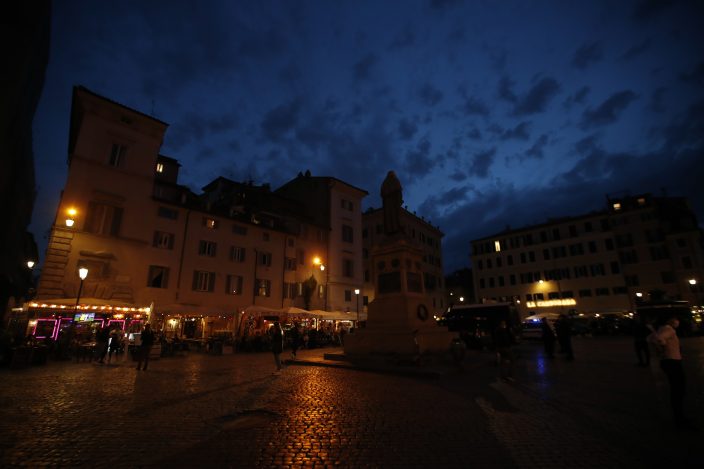 People sit at restaurants at sunset, at Rome's Campo dei Fiori neighbourhood, Monday, April 26, 2021. Italy's gradual reopening after six months of rotating virus closures is satisfying no one: Too cautious for some, too hasty for others. Allowing outdoor dining starting Monday is coming too little, too late for restaurant owners whose survival has been threatened by more than a year of on-again, off-again virus closures. (AP PhotoAlessandra Tarantino)

DALLAS-OFFICER-MISTAKEN-APARTMENT-APPEAL — A Texas court is scheduled to hear arguments on overturning the conviction of a former Dallas police officer who was sentenced to prison for fatally shooting her neighbor in his home. SENT: 300 words, photo. 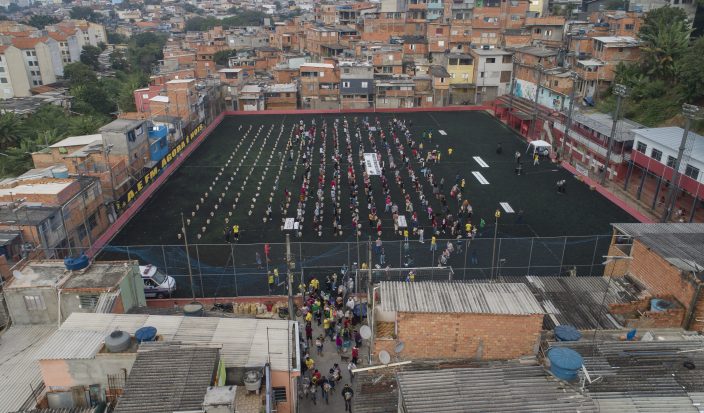 Residents wait on a soccer field for food donated by the local NGO "G10 Favelas," amid the COVID-19 pandemic in the Capao Redondo area of Sao Paulo, Brazil, Monday, April 26, 2021. (AP PhotoAndre Penner)

DC-POLICE-CYBER-EXTORTION — The Washington, D.C., police department says that its computer network was breached, and a Russian-speaking ransomware syndicate claimed to have stolen sensitive data, including on informants, that it threatened to share with local criminal gangs unless police paid an unspecified ransom. SENT: 400 words, photo.

ISRAEL-APARTHEID DEBATE — One of the world’s best-known human rights groups says that Israel is guilty of the international crimes of apartheid and persecution because of discriminatory policies toward Palestinians within its own borders and in the occupied territories. SENT: 1,020 words, photos.

CHINA-COMMUNIST-TOURISM-CENTENARY — On the 100th anniversary of the Chinese Communist Party, tourists are flocking to historic sites and making pilgrimages to party landmarks. SENT: 710 words, photos.

MYANMAR — Ethnic Karen guerrillas say they captured a Myanmar army base in what represents a morale-boosting action for those opposing the military’s takeover of the country’s civilian government in February. SENT: 430 words, photos.

PERSIAN-GULF-TENSIONS — American and Iranian warships had a tense encounter in the Persian Gulf earlier this month, the first such incident in about a year amid wider turmoil in the region over Tehran’s tattered nuclear deal, the U.S. Navy says. SENT: 370 words, photos.

JAPAN-TOYOTA-LYFT — Toyota Motor Corp. has acquired the self-driving division of American ride-hailing company Lyft for $500 million, in a move that underlines the Japanese automaker’s ambitions in that technology. By Business Writer Yuri Kageyama. SENT: 440 words, photos.

SPACEX-ASTRONAUTS RETURN — The astronauts flying SpaceX back to Earth this weekend urged boaters to stay safe by staying away from their capsule’s splashdown in the Gulf of Mexico. By Aerospace Writer Marcia Dunn. SENT: 300 words, photos.