Mexico’s pandemic death toll passed 345,000 Tuesday, though most states have not seen any rebound in coronavirus cases, officials said.

There have been over 215,500 test-confirmed deaths related to COVID-19, but Mexico does so little testing that many people die without having been tested.

A preliminary government review of death certificates suggested excess deaths attributable to COVID-19 reached 316,344 by the start of March. There have been 29,395 test-confirmed deaths since then, for a total of 345,739. 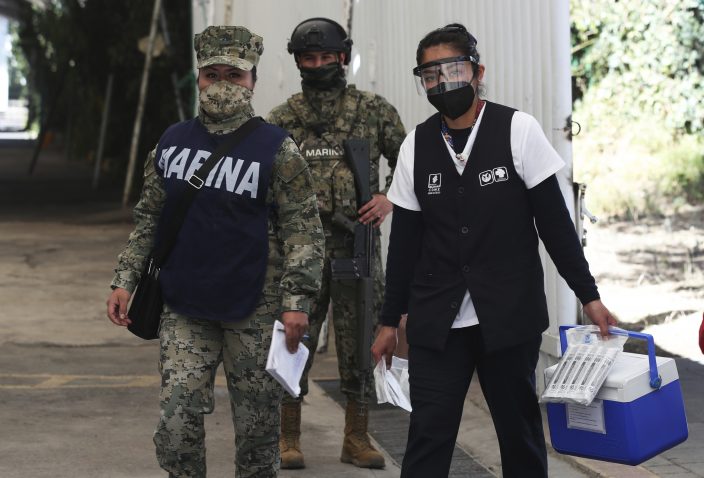 FILE - In this Feb. 24, 2021, file photo, a health worker is escorted by soldiers as she arrives to the Sports Center with a cooler containing doses of the Russian COVID-19 vaccine Sputnik V, for a mass vaccination campaign against the new coronavirus for the elderly in the Xochimilco borough of Mexico City. The stark vaccine access gap is prompting increased calls across the world for the U.S. to start shipping vaccine supplies to poorer countries. (AP PhotoMarco Ugarte, File)

The Caribbean coast state of Quintana Roo, home to the resort of Cancun, has seen an uptick in cornanvirus cases as has the Pacific coast state of Colima. Authorities believe increased Easter-week tourism in Quintana Roo may have contributed to the increase in infections.

The government announced plans Tuesday to start vaccinating people between the ages of 50 and 59. Previously, only front-line health care personnel, teachers and those over 60 had been eligible for the shots.

Officials have administered 16.7 million doses to date, a small amount given the country’s population of 126 million. Like many countries, Mexico has had a difficult time getting enough vaccines.