After Patrick Marleau passed Gordie Howe last week for the most games played in NHL history, the ironman streak of Doug Jarvis could be the next milestone to fall.

Jarvis played in a record 964 consecutive games — every game for 12 full seasons from 1975 through 1987 on three different teams while raising the Stanley Cup four times with Montreal.

Florida’s Keith Yandle, Marleau and Arizona’s Phil Kessel are all less than a full season away from passing Jarvis. Now 66 and an adviser for the Vancouver Canucks, Jarvis is rooting for his record to be broken. FILE - In this Wednesday, Jan. 31, 1979 file photo, Montreal Canadiens goalie Ken Dryden reaches to cover the puck in front of the Montreal net as teammate Doug Jarvis (21) holds Pittsburgh Penguins Gregg Sheppard during the first period of an NHL hockey game in Pittsburgh. Patrick Marleau passing Gordie Howe for the most games played in NHL history could soon be followed by another record of hockey longevity falling. Florida's Keith Yandle, Marleau and Arizona's Phil Kessel are all less than a full season away from Doug Jarvis' NHL ironman record of 964 consecutive games played. (AP PhotoR.C. Greenawalt, File)

“They all have a pretty good opportunity that they will bypass 964, I would think,” Jarvis said. “I’m happy for them. To be able to play in the game of hockey at the NHL level for all those years and those games and to really basically avoid injury, I think that’s tremendous.”

Yandle is the front-runner, 47 games back of Jarvis at age 34 with two seasons left on his contract. The defenseman has credited his parents for his work ethic.

“I’m lucky every day just to be playing in the NHL and calling this a job,” Yandle said in March before playing his 1,000th regular-season game. “Never really thought I’d even make it to the NHL, so it’s one of those things where I’m just kind of enjoying the ride and enjoying every minute of it.” Marleau is 62 games behind but he turns 42 in September and would need to play another season to have a chance. Before passing Howe's mark of 1,767 games played, Marleau said the same thing keeps him showing up to the rink: “I just love it. There’s nothing else like it.”

Kessel is 33, won the Stanley Cup twice with Pittsburgh and has a year left on his contract. He is also producing at a high level for the Coyotes, who are in playoff contention.

“I haven’t changed anything,” Kessel said recently. “My body’s feeling better than it did last year. Whenever your body feels good, it helps a little bit.” 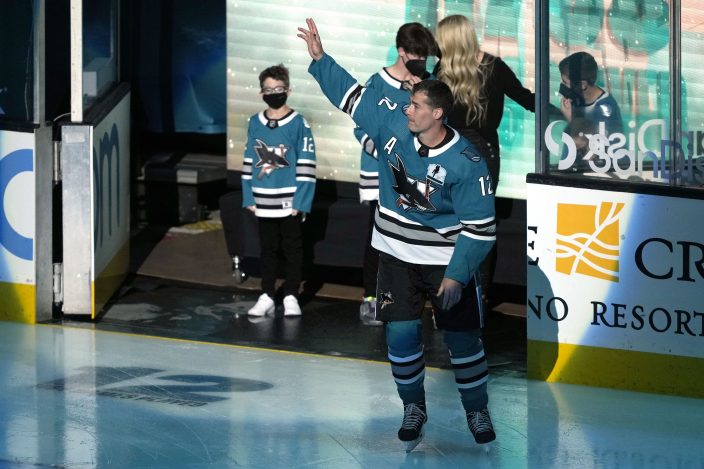 San Jose Sharks center Patrick Marleau (12) waves to fans as he was honored for his 1,768 NHL games played, before the Sharks hockey game against the Minnesota Wild on Saturday, April 24, 2021, in San Jose, Calif. (AP PhotoTony Avelar)

Jarvis is feeling good 33 years since his streak ended and he hung up his skates for good.

“I have too many colleagues that have played the game and they’re dealing with sore hips and knees and shoulders,” Jarvis said. “I’m good — really no issues. I enjoy running. I like to stay active that way. I feel very blessed.”

The NHL won't have to stage its entire postseason in a quarantined bubble like last year, but Canada's four playoff teams face some questions. If restrictions don't ease north of the border and travel is an issue, the league could consider something like a mini-North Division bubble or move the winner to the U.S. when the playoffs get to the final four.

“It’s going to depend on government regulations in terms of where we’re going to be able to travel our players and our teams and where we can’t,” Commissioner Gary Bettman said Tuesday. ”If we can’t travel in Canada, either as among the provinces or from the U.S. to Canada and back, we’ll make whatever adjustments we have to do to get the playoffs completely. It’s wildly unpredictable."

NHL teams will recoup some pandemic revenue losses with Seattle's $650 million expansion fee and the money from new U.S. media rights deals with ESPN and Turner Sports. Bettman expects that windfall to help the salary cap increase “sooner than it otherwise would have” but remain at $81.5 million for probably the next couple of seasons.

“We have a fairly large escrow to be made up, and until we do, the cap is basically flat,” Bettman said. “The increase in value obviously is going to shorten the timeframe that perhaps many had projected when we did the return to play for last season and extended the collective bargaining agreement.”

Sidney Crosby and the Pittsburgh Penguins visit the Washington Capitals on Thursday and Saturday in a potential East Division playoff preview.