Seth Curry scored 20 points, Tobias Harris and Joel Embiid each added 17 and the Philadelphia 76ers built a big early lead and cruised to a 127-83 victory over the Atlanta Hawks on Wednesday night to clinch an Eastern Conference playoff berth.

Shake Milton and Furkan Korkmaz scored 12 apiece and Tyrese Maxey added 11 for the Sixers, who became the second team in the Eastern Conference to secure a postseason spot. The Sixers are currently second in the East, a game behind Brooklyn and 2 1/2 games ahead of third-place Milwaukee with 10 games to play.

Both the Nets and Bucks were off Wednesday. 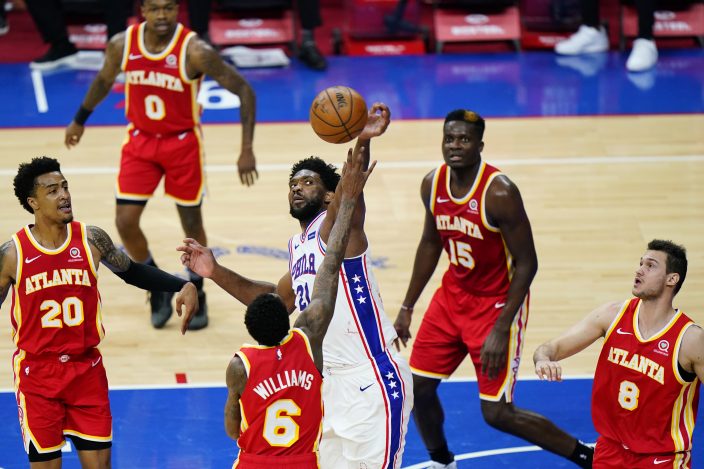 Philadelphia 76ers' Joel Embiid (21) knocks a loose ball away from Atlanta Hawks' Lou Williams (6) during the second half of an NBA basketball game, Wednesday, April 28, 2021, in Philadelphia. (AP PhotoMatt Slocum)

Young did pick up a technical foul in the fourth quarter for yelling at officials from the Hawks bench following an incident where teammate Kris Dunn picked up an unsportsmanlike technical for getting in the middle of a post-play celebration between Milton and Matisse Thybulle.

Philadelphia never trailed, jumping out to a 37-17 lead at the end of the first quarter thanks in large part to Curry’s 13 points on 5-of-7 from the floor. 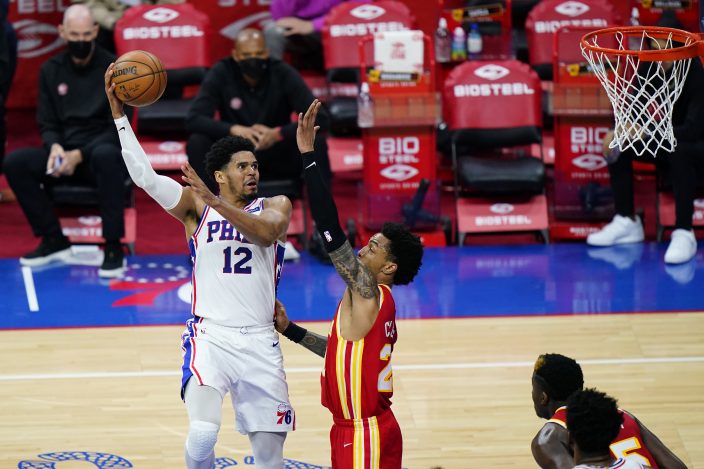 Philadelphia 76ers' Tobias Harris, left, goes up for shot against Atlanta Hawks' John Collins during the second half of an NBA basketball game, Wednesday, April 28, 2021, in Philadelphia. (AP PhotoMatt Slocum)

Atlanta shot just 33.8% from the floor, its second-worst mark of the season, and 32% from beyond the 3-point line. The 83 points for the Hawks were a season low, coming on the heels of an 86-point performance in a loss Monday night at Detroit.

Philadelphia's starters didn’t play in the fourth quarter. Ben Simmons, who was limited to 15 minutes by foul trouble and the game’s lopsided nature, scored eight points and dished out six assists. 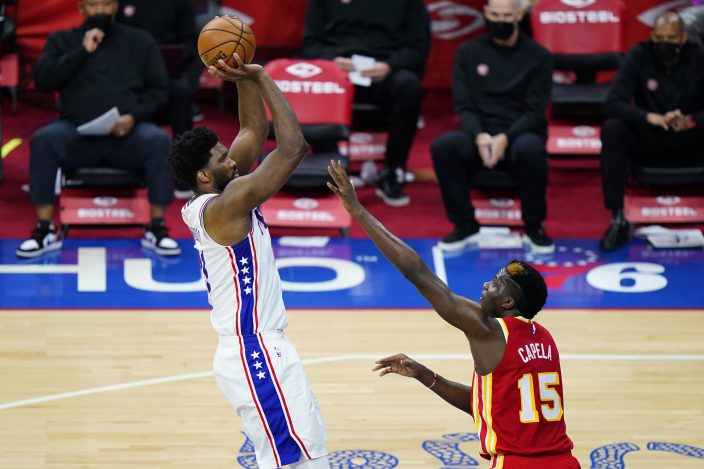 Philadelphia 76ers' Joel Embiid, left, goes up for a shot against Atlanta Hawks' Clint Capela during the second half of an NBA basketball game, Wednesday, April 28, 2021, in Philadelphia. (AP PhotoMatt Slocum)

76ers: Philadelphia played with its full starting lineup — Simmons, Curry, Embiid, Harris and Danny Green — for just the 25th time this season. The 76ers are 21-4 in those games. Embiid has missed 19 games and has been bothered by a sore shoulder in recent days. …. The 76ers made the playoffs for the fourth year in a row, the first time they’ve done that since Allen Iverson led the franchise to five straight appearances from 1999-03. 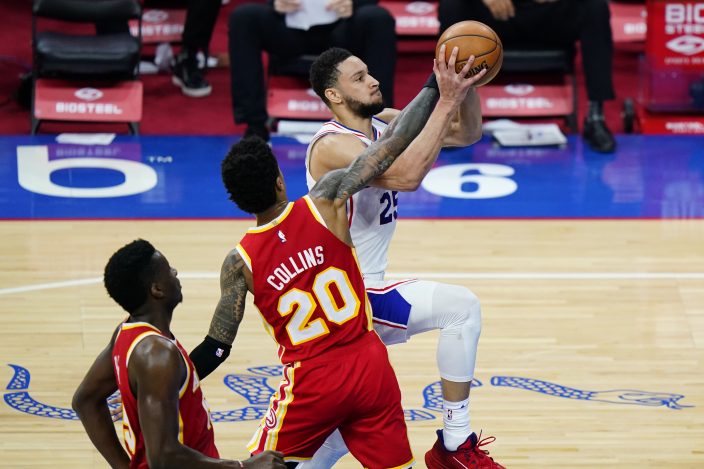 Philadelphia 76ers' Ben Simmons right, tries to get past Atlanta Hawks' John Collins during the second half of an NBA basketball game, Wednesday, April 28, 2021, in Philadelphia. (AP PhotoMatt Slocum)

The Hawks and 76ers will meet again for the second half of the back-to-back on Friday night in Philadelphia.