The U.N. agency coordinating humanitarian aid said Friday that armed conflict and insecurity in large areas of Myanmar are impeding its operations there.

The United Nations Office for the Coordination of Humanitarian Affairs, OCHA, said northern Shan, Kachin and Kayin (Karen) states and the Bago Region are areas where conflict in one of Southeast Asia’s poorest countries has complicated its task.

“Constraints include road blockages, increased presence of security personnel and restrictions on movement,” the agency said in an update on the humanitarian situation. 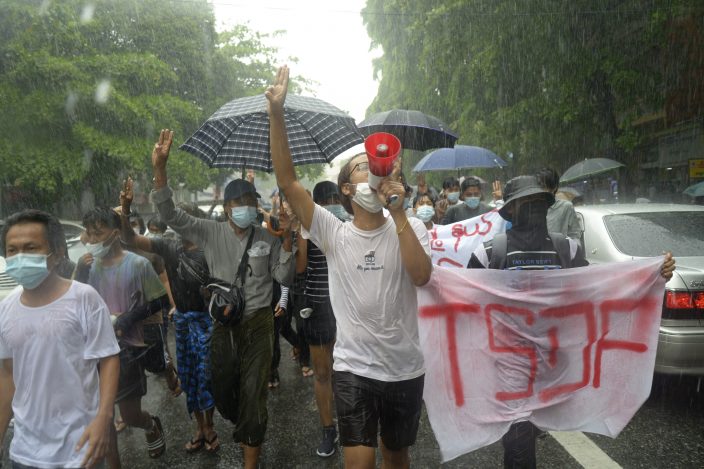 Anti-coup protesters flash the three-finger salute and chant slogans during a demonstration against the military coup in the rain at Pabedan township in Yangon, Myanmar, Friday, April 30, 2021. (AP PhotoVincent Thian)

The need for assistance has been increasing. The report estimated that more than 50,000 people have been displaced from their homes since December, in addition to an existing population of over 300,000 internally displaced people.

OCHA provides support to Myanmar in the areas of health, water and sanitation, shelter, nutrition, food security, protection from harm and education in emergency situations.

Myanmar for decades has suffered from insecurity and armed conflict between the government and ethnic minority groups seeking greater autonomy. There has been an upsurge in fighting in recent months, especially since the military’s seizure of power on Feb. 1 from the elected government of Aung San Suu Kyi.

Some of the ethnic guerrilla armies have allied themselves with the city-based popular movement against the new ruling junta and seeks a return to democracy. The bigger ethnic groups supporting the protest movement are the Kachin in the north and the Karen in the south. The guerrilla forces of both groups have engaged government troops on the ground and have also been the targets of air strikes by Myanmar’s military.

“Blanket restrictions on access to populations in areas controlled by non-state armed actors remain in place,” it said.

OCHA said 40,000 people have been newly displaced in southeastern Myanmar by intensified fighting between the government and guerrillas of the Karen National Liberation Army, and by “indiscriminate attacks” by Myanmar's army on civilian areas.

In Kachin State, around 5,800 people have been displaced since fighting flared in early March between government troops and the Kachin Independence Army, it said, estimating that about 5,000 people remain displaced.

The report covers the period up to April 23, and there has been significant new fighting since then between government forces and the Karen and Kachin guerrillas.

Insecurity and clashes in northern Shan involving other ethnic armed organizations have displaced about 11,000 people since January, OCHA said.

The report noted less obvious side effects from the ongoing political crisis that have affected its work.

“For example, the disruption of banking services and the limited availability of cash are increasingly affecting the delivery of humanitarian assistance in all conflict-affected areas,” it said.

The U.N agency said its 2021 operation plan for Myanmar is severely underfunded, with only $34.6 million received of the $276.5 million requested.

Protests against military rule, meanwhile, continued across Myanmar on Friday, almost three months after the army’s takeover plunged the country into crisis.

In Yangon, a group of young demonstrators marched through heavy rain in the heart of the country’s biggest city. Witnesses said several were detained.

According to the Assistance Association for Political Prisoners, which compiles numbers of arrests and fatalities linked to the junta’s crackdown on its opponents, 759 protesters and bystanders have been killed since February’s military takeover, and 4,513 people have been arrested, with 3,461 still detained.