The results were predictable.

Devin Booker scored 31 points, Chris Paul had 12 points and nine assists and the Suns pulled into a tie for the best record in the NBA by cruising past the Jazz 121-100 on Friday night. 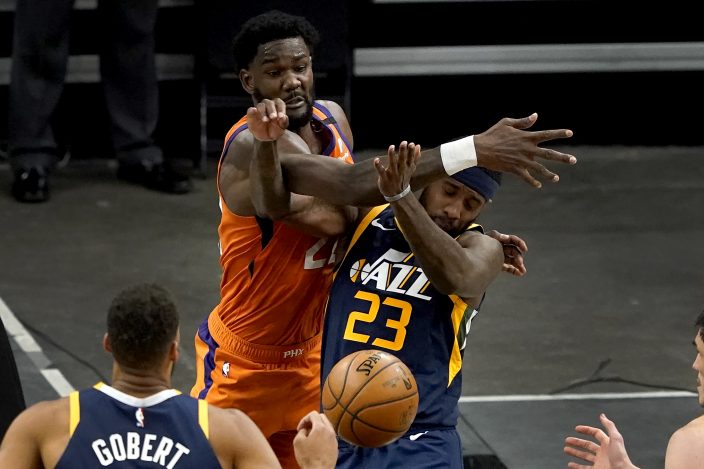 Phoenix is actually atop the NBA, by virtue of holding the tiebreaker over the Jazz.

Two nights after clinching their first postseason spot in 11 years, the Suns kept rolling and never trailed after the opening minutes.

Booker shot 13 of 19 from the field, hitting three step-back jumpers late in the third that brought roars from the crowd. The third one came in front of the Suns' bench and was over Utah's 7-foot center Rudy Gobert. Ayton and Bridges were celebrating so hard with Booker that they almost forgot to let him back on defense. 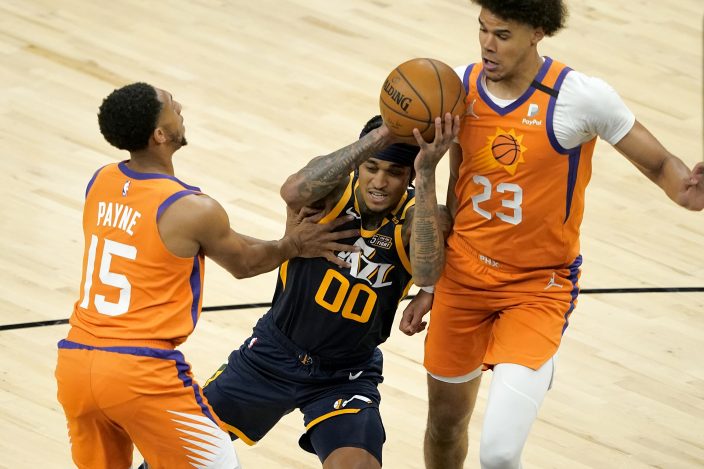 “That’s just having fun with it man,” Booker said, grinning. “Not everyone has a vibe like this, an energy like this. It’s a great environment to get better in.”

The Suns and Jazz both have a 45-18 record. If they're tied at the end of the season, Phoenix would claim the No. 1 seed in the Western Conference playoffs because they swept the three-game season series. 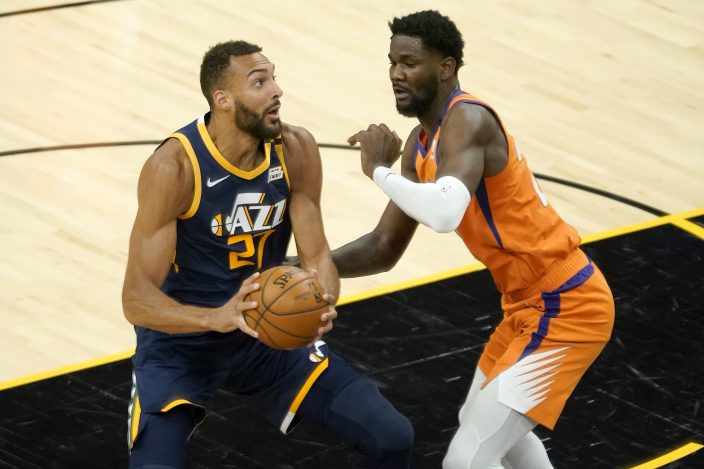 The Jazz were led by Bojan Bogdanovic, who scored 22 points. Utah has lost three of its last four games.

“I think our physicality wasn’t there,” Gobert said. “Those guys are good but I feel they were a little bit too comfortable. Our offense affected our defense, too. When we turn the ball over or take a bad shot they were able to run on us. Then they get going and get confidence.”

Utah was playing without their All-Star backcourt of Mike Conley and Donovan Mitchell. Conley was out because of a tight hamstring, while Mitchell has a sprained ankle. Without them on the floor, Phoenix flourished. 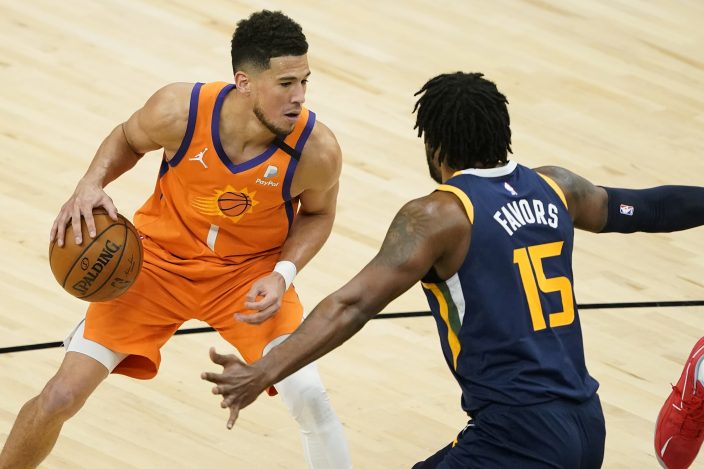 “Those are tough games to play in emotionally," Suns coach Monty Williams said. "You’re ramped up to play against the best team in the league and they sit a few guys, you can have a letdown. But we handled business tonight.”

The Suns took a 25-point lead by midway through the second quarter when Cameron Payne's 3-pointer made it 50-25. The Jazz managed to cut the deficit to 68-52 by halftime.

Booker led the Suns with 16 before the break, while Bridges had 13. Bogdanovic had 15 for the Jazz. 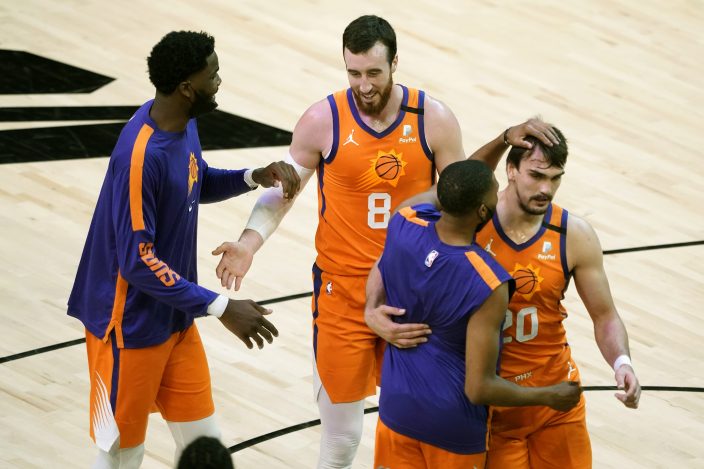 Phoenix Suns forward Frank Kaminsky (8) and forward Dario Saric (20) celebrate with teammates during the second half of an NBA basketball game against the Utah Jazz, Friday, April 30, 2021, in Phoenix. (AP PhotoMatt York)

The Jazz pulled within 70-57 in the third quarter, but couldn't get any closer. The Suns had their lead back up to 96-72 by the start of the fourth and eased to the win.

“We didn’t execute the way we wanted to,” Utah coach Quin Snyder said. “In games like this when certain players are not able to play, your margin for error is really small.” 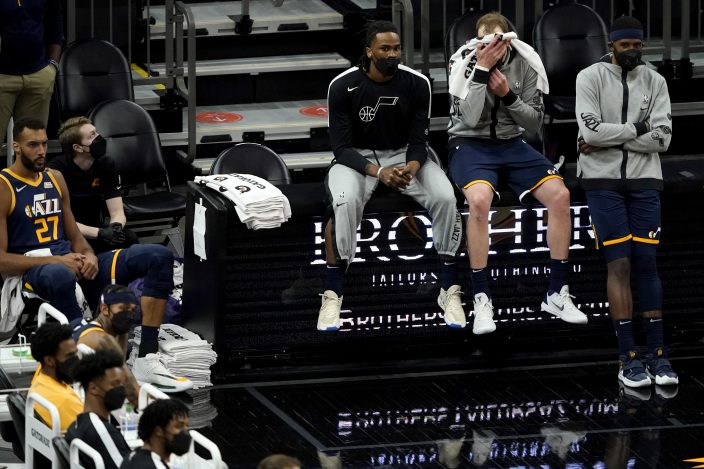 Utah Jazz players watch from the bench during the second half of an NBA basketball game against the Phoenix Suns, Friday, April 30, 2021, in Phoenix. (AP PhotoMatt York)

One reason the Suns have been among the NBA's best teams is their best players have stayed healthy. Ayton and Bridges have played in all 63 games this season. Paul has played in 62 and Booker's been available for 59.

They've had to mix and match some with their second unit. Jae Crowder, Dario Saric, Abdel Nader and Payne have all missed chunks of time.

“We have a tough group," Williams said. "They work really hard so they can play through bumps and bruises of the season.” 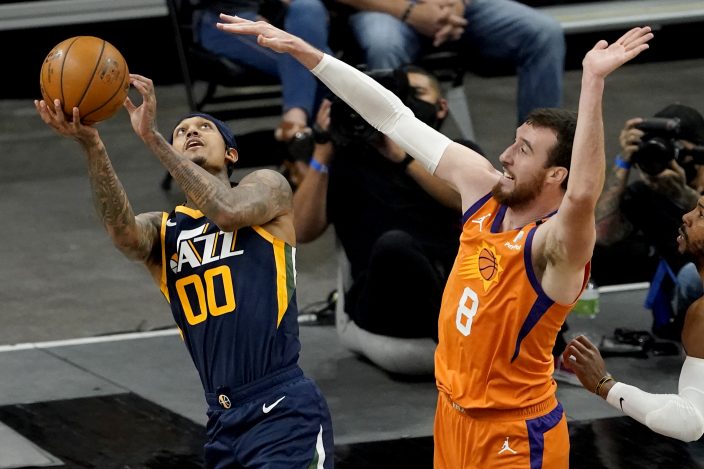 Jazz: Conley, Mitchell and center Udoka Azubuike (right ankle) were out. Conley and Mitchell have combined to average about 43 points this season.

Suns: Forwards Jae Crowder (right ankle) and Abdel Nader (right knee) didn't play because of injuries. ... The Suns shot 68% from the field (17 of 25) during the first quarter. ... The Suns' bench combined to score 49 points. Payne had 11 points, and Frank Kaminsky and Dario Saric each added eight.

Jazz: Return home to host the Raptors on Saturday.

Suns: Travel to face the Thunder on Sunday.