Defending champion Paris Saint-Germain scraped a 2-1 home win against Lens to move to the top of the French league and pressure Lille ahead of its game against Nice late Saturday.

Lille needed a victory to reclaim the lead by one point.

Neymar opened the scoring following a defensive error in the 33rd minute and captain Marquinhos scored with another powerful header — just as he had against Manchester City midweek — to make it 2-0 after an hour. 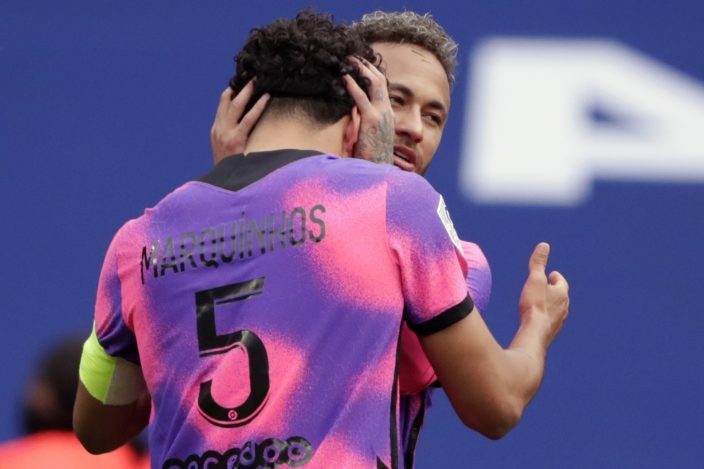 PSG's Marquinhos celebrates with teammate Neymar after scoring his side's second goal during the French League One soccer match between Paris Saint-Germain and Lens at the Parc des Princes stadium in Paris, France, Saturday, May 1, 2021. (AP PhotoThibault Camus)

Lens stayed in fifth place and the Europa League spot but was level on points with Marseille. Rennes can move into fifth if it wins at struggling Bordeaux on Sunday.

PSG coach Mauricio Pochettino was without star striker Kylian Mbappe, who is nursing a calf injury, while central midfielders Leandro Paredes and Marco Verratti were rested for the return leg at City on Tuesday. PSG trails 2-1. 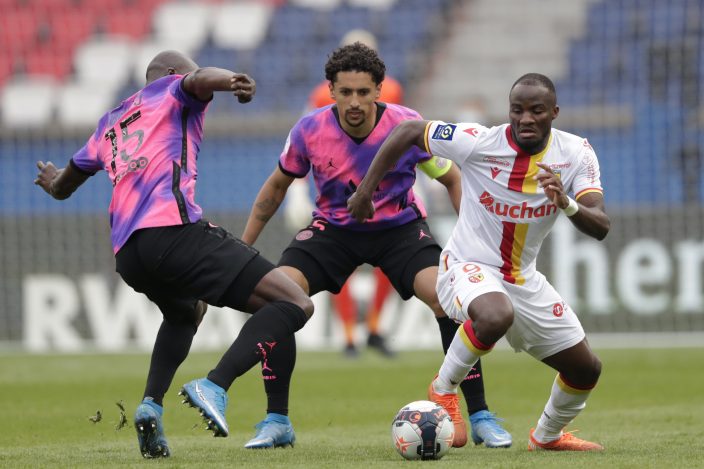 Neymar gave PSG the lead following a Lens error. Defender Facundo Medina won the ball near the penalty area, but then panicked and passed it back into the feet of Neymar, who finished confidently.

Lens had chances to equalize near the break.

Striker Arnaud Kalimuendo's shot was pushed away by goalkeeper Keylor Navas and the loose ball fell to defender Jonathan Clauss, who drilled it wide with Navas grounded. Seko Fofana shot just wide in the 44th.