Liverpool will like nothing more than to officially hand over its title as English Premier League champion to Manchester City on Sunday.

City moved to the brink of reclaiming the league crown by beating Crystal Palace 2-0 on Saturday. One more win will complete the job for Pep Guardiola's players — unless Liverpool does it for them with a victory at second-placed Manchester United, the only team that can mathematically stop City.

Liverpool has long since given up its title after a dramatic implosion in the second half of the season. The Reds even look likely to fall short of qualifying for next season's Champions League considering they are seven points adrift of fourth-placed Chelsea, which beat Fulham 2-0 on Saturday.

To have any realistic chance of finishing in the top four, winning at Old Trafford is a must for Jurgen Klopp's team — even if that would mean its reign as English champion ends after barely 10 months.

Of course, there are plenty of more chances for City to wrap up a third title in four years, and a fifth in the last decade. Should Liverpool fail to beat United, City can become champion again with a home win over Chelsea next Saturday, one of four remaining games for Guardiola's team.

The champagne is very much on ice for City.

Or, as Guardiola put it after the win at Palace: “We can start to think about putting it in the fridge.”

Sergio Aguero, City's all-time record scorer who is leaving the club at the end of the season, took advantage of a rare start in the team by scoring a typically clinical goal to set City on its way in the 57th minute at Selhurst Park.

His control was instant off Benjamin Mendy's pass, before Aguero moved into the area and rifled a rising shot into the roof of the net just inside the near post. 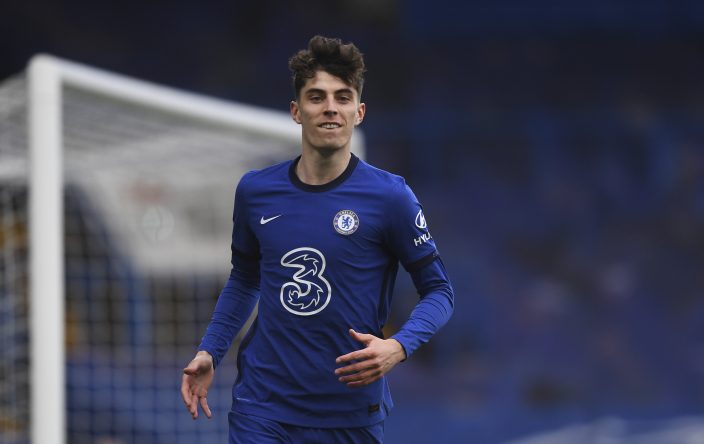 Chelsea's Kai Havertz celebrates after scoring his side's second goal during the English Premier League soccer match between Chelsea and Fulham at Stamford Bridge Stadium in London, Saturday, May 1, 2021. (Neill HallPool via AP)

“What a goal, what an action, what a man,” Guardiola purred.

Ferran Torres added the second just 84 seconds later as City belatedly flexed its muscles after a slow start, mainly due to Guardiola rotating heavily to give his first-choice players a rest between matches against Paris Saint-Germain in the Champions League semifinals. City leads 2-1 after the first leg in Paris, with the return match on Tuesday. 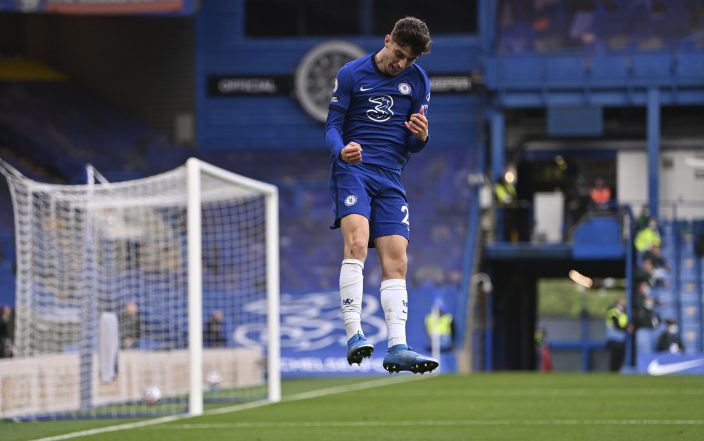 Chelsea's Kai Havertz celebrates after scoring his side's second goal during the English Premier League soccer match between Chelsea and Fulham at Stamford Bridge Stadium in London, Saturday, May 1, 2021. (Justin SetterfieldPool via AP)

Chelsea was blessed with an extra two days between matches, compared to City, in its Champions League semifinal against Real Madrid, allowing manager Thomas Tuchel to field a strong lineup against Fulham.

Mason Mount was one of the regulars who started and the England midfielder produced a piece of individual brilliance to set up the first of Kai Havertz's two goals at Stamford Bridge. Mount brought down a long ball forward by Thiago Silva with deft control, then slipped a pass between two defenders with his next touch to give Havertz time and space to finish into the corner in the 10th minute.

Havertz traded passes with fellow Germany international Timo Werner for the second goal in the 49th as Chelsea cemented fourth place and moved six points clear of fifth-placed West Ham, whose game in hand is against Burnley on Monday.

Brighton can start planning for a fourth straight season in the top flight.

A 2-0 win at home against Leeds pushed Brighton 10 points clear of the relegation zone with four games remaining.

Pascal Gross, with a penalty, and Danny Welbeck were the scorers.