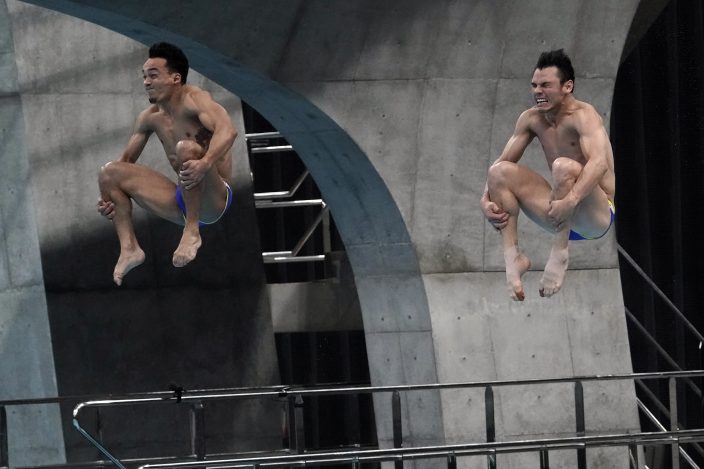 IRAN — The United States immediately denied a report by Iranian state-run television that deals had been reached for the Islamic Republic to release U.S. and British prisoners in exchange for Tehran receiving billions of dollars. It wasn’t immediately clear if the report represented a move by the hard-liners running the Iranian broadcaster to disrupt negotiations tawith the West amid talks in Vienna on Tehran’s tattered nuclear deal. By Jon Gambrell and Isabel Debre SENT: 820 words, photo. With IRAN-FOREIGN-MINISTER-LEAKED-RECORDING — Iran’s foreign minister apologized Sunday for recorded comments that were leaked to the public last week that offered a blunt appraisal of the country’s power struggles. SENT: 410 words, photo.

BLACK AMERICA’S ATTORNEY GENERAL — Ben Crump, the Rev. Al Sharpton says, is “Black America’s attorney general.” In less than a decade, the Florida-based attorney has become the voice for the families of Trayvon Martin, Michael Brown, Breonna Taylor and George Floyd -- Black people whose deaths at the hands of police and vigilantes sparked a movement. By Aaron Morrison and John Seewer. SENT: 1,410 words. An abridged version of 1,030 words is available.

PUBLIC-TRANSIT’S-FUTURE — As President Joe Biden urges more federal spending for public transportation, transit agencies decimated by COVID-19 are struggling with a new uncertainty: how to win back passengers. Commuting patterns are changing as work-from-home arrangements show signs of becoming a longer-term trend, and riders are still hesitant to return to potentially crowded spaces on buses and trains. Employers reopening officials is seen as key to increasing ridership. By Hope Yen, Christopher Weber, Sophia Tareen and David Porter. SENT: 2,100 words, photos. An abridged version of 990 words is available. This is the Monday Spotlight.

MED-VIRTUAL-FIRST-CARE — Make telemedicine your first choice for most doctor visits. That’s the message some U.S. employers and insurers are sending with a new wave of care options. Amazon and several insurers have started or expanded virtual-first care plans to get people to use telemedicine routinely, even for planned visits like annual checkups. They’re trying to make it easier for patients to connect with regular help by using remote care that grew explosively during the COVID-19 pandemic. By Tom Murphy. SENT: 970 words, photos.

VIRUS OUTBREAK-PUERTO RICO — Puerto Rico seemed to be sprinting toward herd immunity this spring before people began letting their guard down against COVID-19 and new variants started spreading across the U.S. territory. Now, a spike in cases and hospitalizations has put medical experts at odds with the government, which is struggling to protect people’s health while also trying to prevent an economic implosion on an island battered by hurricanes, earthquakes and a prolonged financial crisis. SENT: 980 words, photos.

VIRUS OUTBREAK-TEACHERS — This spring marks a year since the coronavirus pandemic shut down schools across the U.S., forcing many students, parents and teachers into virtual classrooms. Then, as states eased restrictions on gathering in person, some students returned to school while others kept learning at home. But they all had to be taught. Many classrooms became a hybrid of virtual and in-person instruction, and teachers had to adapt. SENT: 1,000 words, photos.

SPAIN-POLITICS-BULLFIGHT — Bullfighting with fans has returned to Madrid for the first time since the start of the pandemic. Regional authorities put a limit of 40% occupancy for the Spanish capital’s first bullfight of the year. SENT: 430 words; photos upcoming.

VIRUS OUTBREAK-BIDEN — One of President Joe Biden’s top advisers has suggested that he’s still wearing a face mask outdoors out of habit although the latest public health guidance says he doesn’t need it. SENT: 270 words, photos.

CELEBRITY-CANDIDATES — From Ronald Reagan and Arnold Schwarzenegger to Al Franken and Donald Trump, there’s a rich history of celebrities trying out new careers in politics. Now, in California, former Olympian Caitlyn Jenner is running for governor. In Texas, Oscar-winning actor Matthew McConaughey has said he’s considering a run for governor. In New York City, Andrew Yang, a businessman who gained fame during his quixotic 2020 presidential run, is a leading contender for the Democratic mayoral nomination. Each has the type of name recognition that other political newcomers would envy. But their lack of experience in public office could be a vulnerability. SENT: 980 words, photos.

UNITED STATES-AFGHANISTAN — The top U.S. military officer says Afghan government forces face an uncertain future and, in a worst-case scenario, some “bad possible outcomes” against Taliban insurgents as the withdrawal of American and coalition troops accelerates in the coming weeks. SENT: 500 words, photos.

NKOREA-US — North Korea warns the United States will face “a very grave situation” because President Joe Biden “made a big blunder” in his recent speech by calling the North a security threat and revealing his intent to maintain a hostile policy against it. SENT: 690 words, photos.

LATIN-AMERICA-SPACE-AMBITIONS — Space-related news is not flowing just from the world’s richest, biggest nations. Take Latin America. On Feb. 17, the congress in Nicaragua approved a law creating a space agency. Costa Rica did the same on Feb. 18, the day that NASA’s Perseverance rover landed on Mars. The potential benefits of space are tantalizing for many countries with scarce resources. Satellite technology, international partnerships, national pride and local development all beckon. SENT: 990 words, photos.

ISRAEL-FESTIVAL-STAMPEDE — Officials came under growing scrutiny for ignoring warnings about safety lapses at one of Israel’s most visited holy sites, as the country mourned 45 ultra-Orthodox Jews killed in a stampede at a festival there. SENT: 820 words, photos.

ISRAEL-SHOOTINGS — Gunmen have opened fire from a passing car at Israelis standing at a major intersection in the Israeli-occupied West Bank. Rescue officials and news reports say three people were injured, two of them seriously. SENT: 180 words.

SPAIN-RACIAL-INJUSTICE-POLITICS — A Senegalese-born man running for a seat in Madrid’s regional assembly this week wants to defy a history of underrepresentation of the Black community and other people of color in Spanish politics. Serigne Mbaye’s candidacy has been met with a racist response from an increasingly influential far-right political party. SENT: 1,020 words, photos.

AFGHANISTAN — A searing blaze that roared through dozens of fuel tankers on the northern edge of the Afghan capital of Kabul killed seven people and injured 14 others, the Interior Ministry says. SENT: 440 words, photos,

HUNGARY-CHINA-EDUCATION — Hungary’s government plans to host a Chinese university campus in its capital Budapest. But critics of the plan say the massive investment places an undue financial burden on Hungarian taxpayers and is indicative of Prime Minister Viktor Orban’s increasing ties to autocracies in Moscow and Beijing. SENT: 890 words, photos.

REL-BOSNIA-RAMADAN-COAL-MINE-PHOTO-GALLERY — Groups of men are preparing for long hours of hard labor deep underground in a trouble-plagued coal mine in Bosnia’s central city of Zenica During Islam’s holy month of Ramadan, observant Muslims among them are easy to spot. Arriving for their shift and assembling for a roll call before riding an elevator into the mine tunnels, they carry with them transparent plastic bags containing simple meals brought from home with which they will break their daily fast. SENT: 420 words, photos.

POLICE REFORM-DISCIPLINARY RECORDS — Lawmakers in more than 20 states have considered bills this year to make the disciplinary records of police officers public or to share them with other agencies, a push that comes amid high-profile deaths at the hands of law enforcement. About 20 states still largely prohibit their release, however. Supporters of greater transparency say it could help improve police accountability, build trust with the community and prevent officers with disciplinary problems who leave one department from being hired by another. SENT: 1,060 words, photos.

WISCONSIN-CASINO-SHOOTING — Tribal leaders in northeastern Wisconsin were in shock hours after a gunman opened fire at a their casino complex, killing two people and wounding another in what witnesses described as a hailstorm of bullets. Brown County Sheriff’s Lt. Kevin Pawlak said the shooting at the Oneida Casino in Green Bay didn’t appear to be a random attack. SENT: 710 words, photos.

ASIAN AMERICANS-GENERATIONAL DIVIDE — The shootings in Georgia and other recent attacks on Asian Americans have exposed division between different generations of the community. Many young activists say their parents and other elders are saddened by the violence but question the value of protests and other collective action. SENT: 910 words, photos.

WYOMING-COAL-LAWSUITS — While most states pursue ways to boost renewable energy, Wyoming is doing the opposite with a new program aimed at propping up the dwindling coal industry by suing other states that block exports of Wyoming coal and cause its coal-fired power plants to shut down. SENT: 970 words, photos.

MIDDLE-SCHOOL-SLAYING — The teenage killer who lured a friend into a bathroom stall at their suburban Miami middle school 17 years ago and cut his throat has died in prison. SENT: 370 words, photo.

EMIRATES-EARNS-FLYDUBAI — Dubai’s budget carrier flydubai reported a loss of $194 million in 2020 as revenue fell by more than 50% in what it described as one of the toughest years in the aviation industry. SENT: 470 words, photo.

SOC-MANCHESTER-UNITED-PROTEST — Anti-ownership protests by Manchester United fans forced the postponement of a Premier League game against Liverpool as supporters stormed the stadium and reached the pitch, while thousands of others gathered outside Old Trafford to demand the Glazer family ownership sell the club. SENT: 570 words, photos.