A.J. Pollock drove in eight runs and Matt Beatty knocked in seven, with both players hitting early grand slams in a startling power show that sent the Los Angeles Dodgers over the Milwaukee Brewers 16-4 on Sunday.

Pollock homered twice and doubled while Beaty went 4 for 6 and scored three times. Their slams came against Alec Bettinger (0-1), who gave up 11 runs in his big league debut after never pitching above Double-A.

This was the first time in franchise history that the Dodgers had two players with at least seven RBIs in the same game. The last time it happened for any major league team was on Aug. 22, 2007, when Jarrod Saltalamacchia and Ramon Vazquez each had seven RBIs for the Texas Rangers in a 30-3 blowout of Baltimore. Los Angeles Dodgers' Matt Beaty watches his grand slam during the second inning of a baseball game against the Milwaukee Brewers Sunday, May 2, 2021, in Milwaukee. (AP PhotoAaron Gash)

The last time two Dodgers hit grand slams in the same game came when Adrian Beltre and Shawn Green did it in a 12-3 victory over the Marlins on May 21, 2000.

Pollock’s eight RBIs matched the highest single-game total by any player in the history of American Family Field, which opened in April 2001 as Miller Park. He shares the record with Josh Willingham (2009) and Yasmani Grandal (2015). All three did it as visiting players.

Chris Taylor scored five runs, going 3 for 3 for the Dodgers. 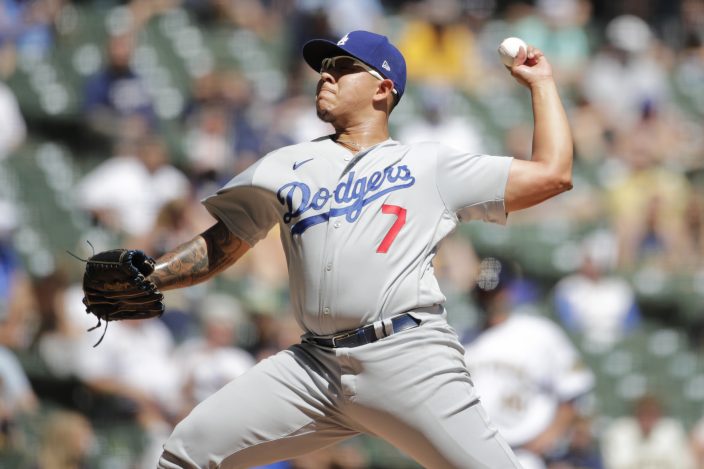 Los Angeles Dodgers' Julio Urias pitches during the first inning of a baseball game against the Milwaukee Brewers Sunday, May 2, 2021, in Milwaukee. (AP PhotoAaron Gash)

Jacob Nottingham hit two homers for the Brewers, who reacquired him from Seattle earlier in the day.

Julio Urias (4-0) allowed one run in seven innings. He struck out 10 and walked none.

Corey Kluber handcuffed Detroit batters to earn his 100th career win with his most dominant performance since 2018, and New York completed its first series sweep this season to get back to .500.

The 35-year-old right-hander allowed two hits in eight innings, walked one and struck out 10 to reach double digits for the 47th time but first since Sept. 24, 2018.

Kluber retired his final eight batters, reaching the Yankees’ season high for innings, and lowered his ERA to 3.03.

Aroldis Chapman struck out two in a perfect ninth that included Detroit’s lone flyout to remain perfect in six save chances.

Max Scherzer delivered in a hurry, tossing a five-hitter to lead Washington over Miami. The three-time Cy Young Award winner hustled out of Nationals Park after a game that took only 2 hours, 37 minutes, dashing to be with wife Erica for the birth of their third child.

Scherzer (2-2) carried a shutout into the ninth inning before Isan Diaz led off with a home run. The right-hander struck out nine without a walk.

Ryan Zimmerman hit a three-run homer as Washington improved to .500 with its fourth straight win.

Marlins rookie Trevor Rogers (3-2) hadn’t allowed a run in his past two games, but gave up three runs in five innings.

Marcus Semien homered and drove in four runs as Toronto finished off a three-game sweep of Atlanta.

Blue Jays newcomer George Springer exited early with leg fatigue. He was the designated hitter for the fourth consecutive game since making his Toronto debut after being slowed by a strained oblique and quadriceps strain.

Atlanta catcher Travis d’Arnaud went on the 60-day injured list with a torn ligament in his left thumb.

The Rays avoided a three-game sweep in a series between the last two American League champions.

Meadows homered in the fifth to make it 3-all. With the score tied at 4 in the seventh, he was hit by a pitch from Brooks Raley (0-1) and later scored on Margot’s hit.

Jeffrey Springs (2-0) got the win in relief. Diego Castillo pitched the ninth for his seventh save in nine tries.

José Berríos (3-2) took advantage of his team's tear at the plate to win for the first time in four starts. Berríos gave up four runs and struck out nine in six innings.

The Twins have won three of four and scored 35 runs during that stretch.

Royals starter Brad Keller was undone by the long ball and his own defense. Keller (2-3) gave up all seven runs in the third, but only two were earned after a pair of errors by third baseman Hunter Dozier.

Zach Plesac (2-3) and three relievers limited the White Sox to four hits as Cleveland took two of three in a series between AL Central foes that both made the playoffs last year. The Indians have won five of their last seven.

Chicago had won seven of nine.

David Dahl and Brock Holt each hit an RBI single in Texas’ three-run eighth inning, and the Rangers took advantage of a costly error by Boston outfielder Alex Verdugo.

Isiah Kiner-Falefa homered to help Texas take three of four from the AL East leaders and win consecutive games for the first time since April 18-19. Josh Sborz (3-1) got three outs for the win, and Ian Kennedy nailed down his seventh save in seven opportunities.

Xander Bogaerts had three hits for the Red Sox, including his fifth homer.

Nate Lowe scored on Dahl’s two-out single off Adam Ottavino (2-2) that tied it at 3.

Nick Castellanos hit a game-ending single off Craig Kimbrel (0-1) in the 10th inning to give Cincinnati a wild win over Chicago.

The Cubs trailed 12-8 before scoring four times with two out in the eighth, tying it when Happ belted a three-run drive off Tejay Antone.

St. Louis has won seven straight against the Pirates and is 20-6 versus Pittsburgh since the start of the 2019 season. The sweep was the second in three series for the Cardinals, who have won eight of 10 overall.

Alex Reyes retired the side in order in the ninth for his seventh save.

The Pirates hit into three double plays and went 0 for 8 with runners on base.