An ethnic rebel group in northern Myanmar said it shot down a government military helicopter on Monday during heavy fighting over a strategic position.

The claim by the Kachin Independence Army came as protests against Myanmar’s military government continued in Kachin State and elsewhere in the country. It would be the first aircraft shot down during recent hostilities between the government and ethnic guerrilla armies. There was no immediate comment by the government on the incident.

The Kachin are one of several ethnic minorities who have allied themselves with the nationwide protest movement against the military’s February ouster of the elected government of Aung San Suu Kyi, who was arrested and remains in detention. The country’s ethnic minorities have been fighting for decades against the central government for greater autonomy. 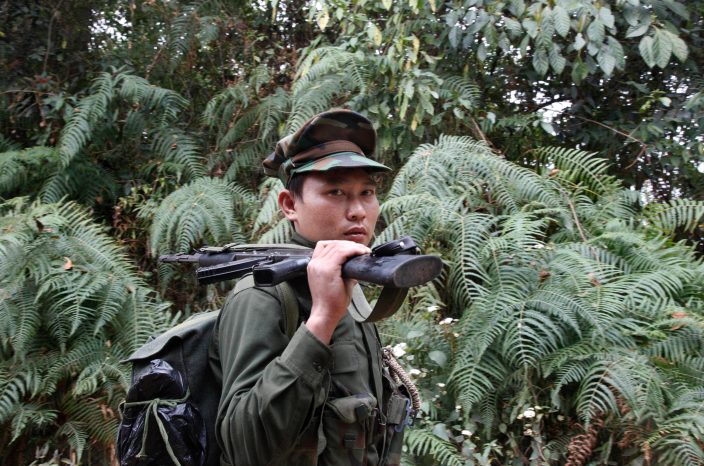 In this March 17, 2018, photo, a Kachin Independence Army fighter walks along a jungle path from the Mu Du front line toward Hpalap outpost in an area controlled by the Kachin rebels in northern Kachin state, Myanmar. The Kachin Independence Army claims to have shot down a helicopter belonging to the government’s military Monday, May 3, 2021, in the course of heavy fighting over a strategic position. (AP PhotoEsther Htusan, File)

Government offenses are underway against the Kachin and the Karen, another ethnic minority in eastern Myanmar that maintains its own armed force and also has been the target of airstrikes. The fighting in Kachin and Karen states has displaced more than 45,000 villagers.

Col. Naw Bu, a spokesman for the Kachin Independence Army, said his group’s forces shot down the aircraft after government forces used helicopters and jet fighters in an attack on Momauk township, where the Kachin seized a base at the foot of Alaw Bum mountain from the government on March 25.

A video on social media said to be of the helicopter shows, at a great distance, an aircraft diving as the sounds of heavy weapons are heard. As the helicopter continues a steep descent, it appears to catch fire and leaves a trail of smoke. The video, and another taken from a distance showing smoke from what was said to be the crash site, could not be independently verified. 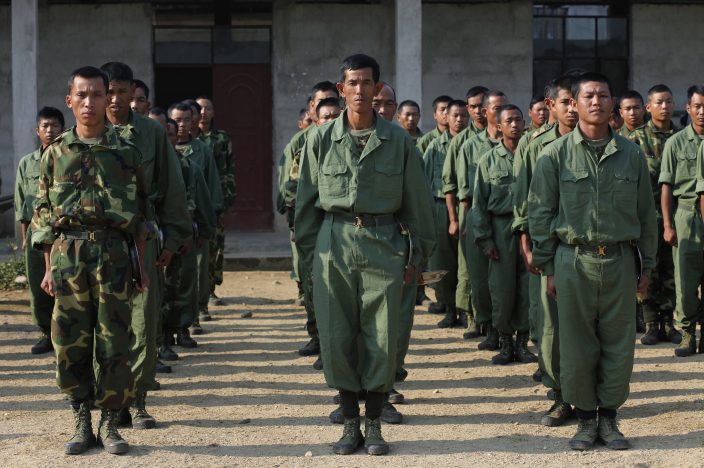 In this Feb. 13, 2012, file photo, recruits of the Kachin Independence Army, one of the country's largest armed ethnic groups, receive training at a military camp near Laiza. the area controlled by the Kachin in northern Myanmar. The Kachin Independence Army claims to have shot down a helicopter belonging to the government’s military Monday, May 3, 2021, in the course of heavy fighting over a strategic position. (AP PhotoVincent Yu, File)

Naw Bu said it was the first aircraft shot down in what has become a fierce battle lasting almost two weeks after the government attacked with heavy artillery and fighter jets.

“Good news! Our prayer has been answered. KIA shot down a terrorist’s helicopter,” Hkanhpa Sadan, foreign secretary of the guerrilla army’s affiliated Kachin National Organization, said on Twitter. Opponents of the military government routinely refer to its forces as “terrorists.”

The ruling junta continues to also face a challenge in the cities and towns of Myanmar, where street protests are still being held more than three months after it seized power. 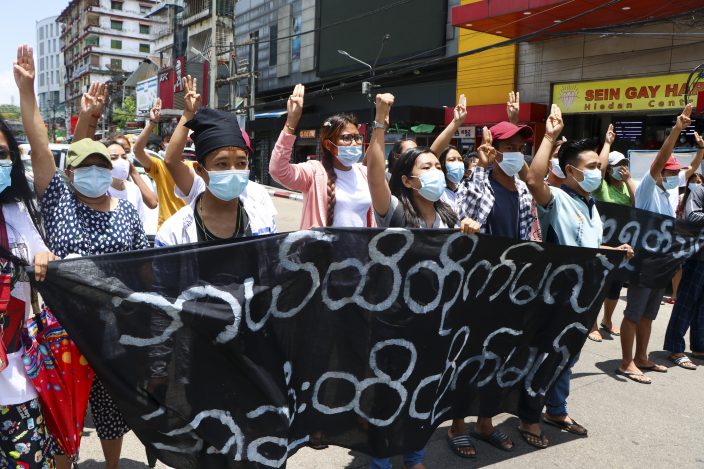 Anti-coup protesters flashes the three-finger salute of defiance and chant slogans with banners that read; '' The Kamayut strike will be fight for to the end when we get victory." during the demonstration against the military coup at Kamayut township Yangon, Monday, May 3, 2021. (AP Photo)

Security forces often use lethal force to break up the protests. The Assistance Association for Political Prisoners, which tracks deaths and arrests, said at least five civilians were killed Sunday on what protesters declared was Global Myanmar Spring Revolution Day.

The organization said security forces have now killed 765 protesters and bystanders. The government puts the death toll at about one-third that figure and says its actions are justified to stop what it calls rioting.

The government also has kept up targeted arrests of activists and other people it considers to be behind the resistance movement. The Assistance Association says 3,555 people have been detained since the army’s seizure of power. About 40 journalists are among those being held. 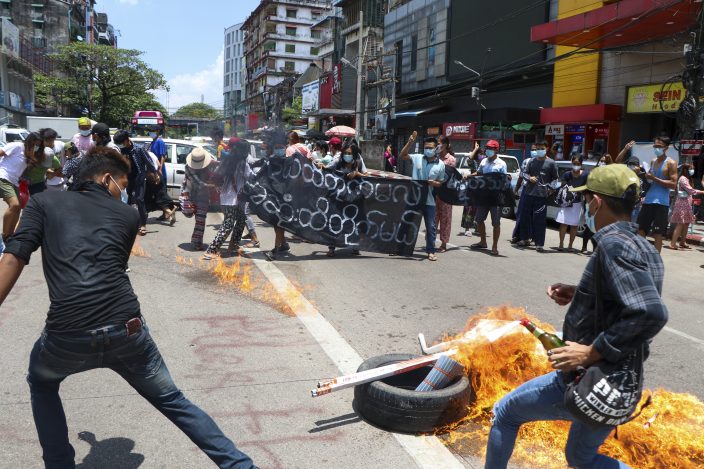 Anti-coup protesters burn tires and chant slogans with banner read ''The Kamayut strike will be fight for to the end when we get victory" during the demonstration against the military coup in Kamayut township Yangon, Monday, May 3, 2021. (AP Photo)