With Michail Antonio and other key players out injured, West Ham’s improbable bid for a first ever Champions League qualification was thrown off track.

One by one, they are returning. And a top-four finish in the Premier League — toppling some of English soccer’s biggest teams along the way — could still be on.

Antonio marked his comeback game after nearly a month out with two goals as West Ham rallied to beat Burnley 2-1 and move within three points of fourth-placed Chelsea with four games left. 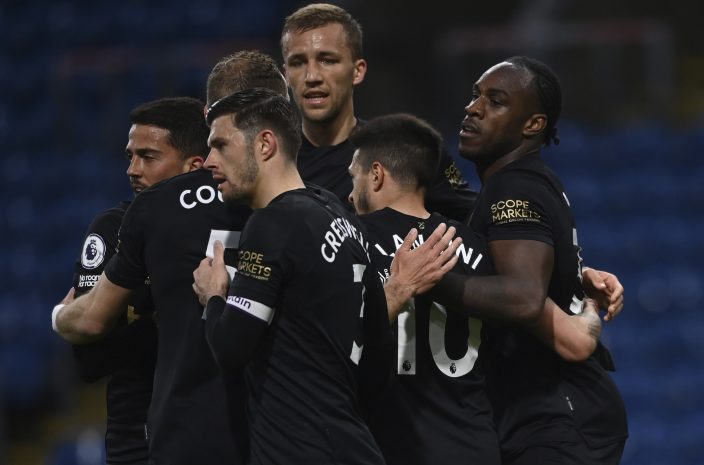 Just as significant for West Ham manager David Moyes, his injury list is clearing up.

Antonio, the team’s star striker and joint-top scorer, and creative defender Aaron Cresswell made their returns against Burnley, and Declan Rice — the England holding midfielder — is back in training after a knee injury that has kept him out since the end of March. 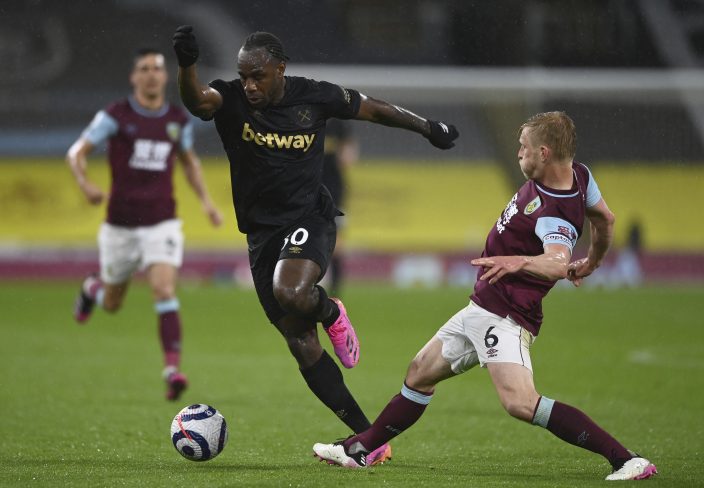 West Ham's Michail Antonio, left is challenged for the ball by Burnley's Ben Mee during the English Premier League soccer match between Burnley and West Ham United and at Turf Moor stadium in Burnley, England, Monday, May 3, 2021. (AP PhotoGareth CopleyPool via AP)

Moyes’ side arrived at Turf Moor on the back of losses to Newcastle and Chelsea, but looked a much more potent force with Antonio leading the line and Jesse Lingard floating behind.

Chris Wood, fresh off a hat trick at Wolverhampton, gave Burnley the lead from the penalty spot in the 19th minute after being fouled by Tomas Soucek but Antonio equalized within two minutes by heading in Vladimir Coufal’s cross.

Antonio then glanced in Said Benrahma’s whipped cross from the left with the slightest of touches into the far corner in the 29th. 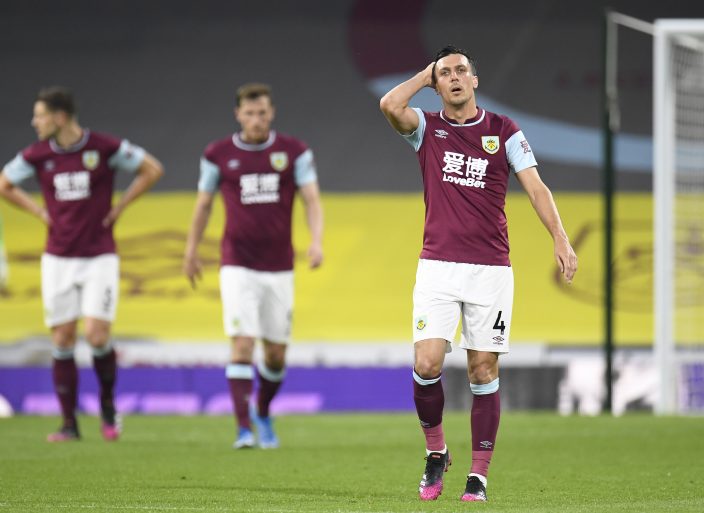 West Ham vaulted Tottenham into fifth place and is four points clear of seventh-placed Liverpool, which has a game in hand after its match at Manchester United on Sunday was postponed because of fan protests against United's American owners.

Sam Allardyce needs what he says is a “miracle” to maintain his record of never having been relegated from the Premier League.

A West Brom team he took over in mid-December is 10 points from safety with just four games remaining after drawing with Wolverhampton 1-1.

West Brom’s fate is likely to be sealed next weekend, perhaps before the side’s next game — at Arsenal on Sunday.

“We owe it to everyone to keep a professional attitude and go out and try to win every game we’ve got left,” Allardyce said, “and hope every team above us loses every game and then, by some magic miracle and some fairy dust, we stay up.”

There are five teams above the relegation zone who are 10 to 12 points clear of West Brom, which is in next-to-last place. Just two of that quintet need to win to consign West Brom to an immediate return to the second-tier Championship.

Wolves was fortunate to go in front at The Hawthorns in first-half stoppage time when West Brom defender Kyle Barkley’s attempted clearance struck the standing foot of 21-year-old striker Fabio Silva and looped into the net.