A look at what's happening around baseball Tuesday:

From the Jacksonville Jumbo Shrimp to the Tri-City Dust Devils, minor league teams are set to host opening day across the country following more than a year of uncertainty and empty ballparks. 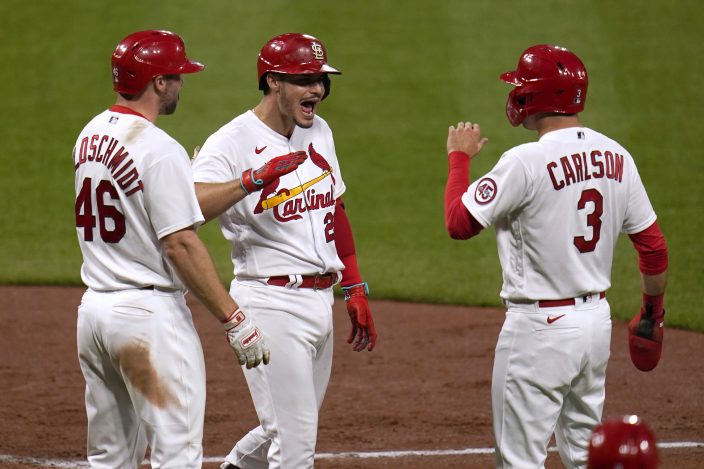 St. Louis Cardinals' Nolan Arenado is congratulated by teammates Paul Goldschmidt (46) and Dylan Carlson (3) after hitting a three-run home run during the third inning of a baseball game against the New York Mets Monday, May 3, 2021, in St. Louis. (AP PhotoJeff Roberson)

Much has changed since the end of the 2019 campaign — the pandemic wiped out the entire 2020 season, Major League Baseball eliminated 40 affiliates, and Commissioner Rob Manfred instituted experimental rules changes that will differ by level in an effort to speed up play and improve player safety.

Of course, the charms of minor league ball remain plentiful. Family-friendly prices, offbeat giveaways and outlandish team branding remain key pillars of the experience. As does the chance for thousands of players to pursue their big-league dreams.

“If you have young guys that need to play baseball, they’ve been void of it for almost two years now, they’ve got to get out there and play,” Los Angeles Angels manager Joe Maddon said. “This is one time I am really going to be paying attention to minor league reports coming up. I want to see and hear how our guys are doing.” 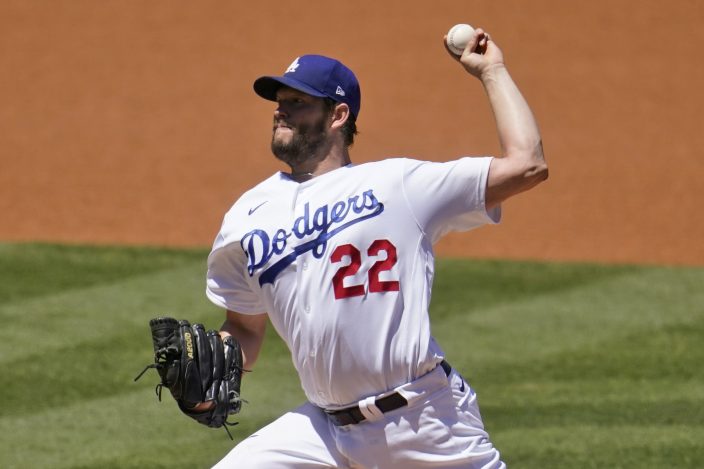 “Stars Wars” is celebrated across the galaxy every May 4, and big league stadiums are no exception. ESPN is going into hyperdrive, putting commentators in costume for the telecast as the Astros visit the Yankees. Karl Ravech will do play by play as Luke Skywalker, with commentary provided by Yoda (Tim Kurkjian) and Jawa (Eduardo Perez).

Fans don’t figure to be as bothered by the dark side, though, as by visiting Houston — this will be the Astros’ first visit to Yankee Stadium since their sign-stealing scheme was uncovered in 2019. 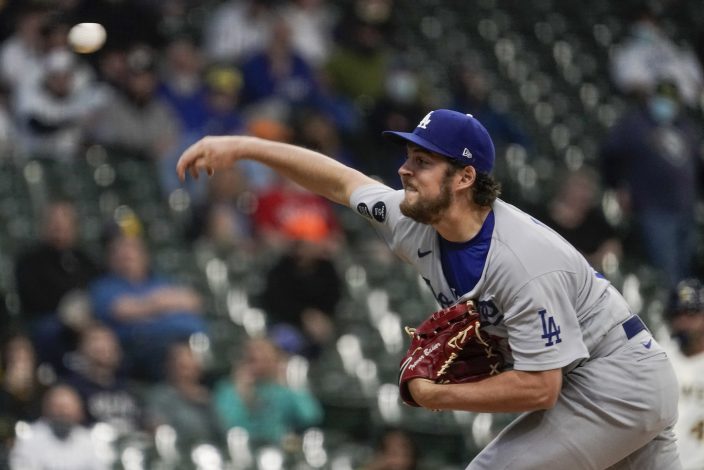 THE POWER OF THREE

The St. Louis Cardinals have hit a three-run homer in five straight games, matching a major league record. Nolan Arenado connected Monday night against the New York Mets to tie the score at 5 in the third inning. If the Cardinals are going to extend their streak, it won’t be easy. Next up, they face two-time Cy Young Award winner Jacob deGrom (2-2, 0.51 ERA), who has given up two earned runs all season and was selected NL pitcher of the month for April.

Right-hander Dustin May needs Tommy John surgery, costing the World Series champion Dodgers one of baseball’s brightest young pitchers for the rest of the season.

The team announced Monday the 23-year-old May will undergo the operation next week. Recovery time is usually at least 12 months, often a few months longer.

May winced in pain after throwing a pitch Saturday in Milwaukee and left the mound. He was 1-1 with a 2.74 ERA in five starts this season.

Last year, May pitched seven times in the postseason, including twice in the World Series against Tampa Bay. He made three starts for short stints in the earlier rounds of the NL playoffs.

May joins a crowd of Dodgers pitchers on the injured list that also includes David Price, Joe Kelly, Corey Knebel and Tommy Kahnle.

Los Angeles plays a split doubleheader against the Chicago Cubs at Wrigley Field after Monday night's scheduled game was postponed because the forecast called for inclement weather. Both games will be seven innings.

Clayton Kershaw and Trevor Bauer will pitch for the Dodgers. Kyle Hendricks is set to face Kershaw in Game 1, but the Cubs had not announced their starter for the second game.

White Sox center fielder Luis Robert could miss the remainder of the season after yet another injury to a Chicago outfielder.

Robert couldn’t put any weight on his right leg as he was helped off the field Sunday with a torn right hip flexor. General manager Rick Hahn said Robert won’t resume baseball activities for at least three to four months.

Second in the AL Rookie of the Year voting and a Gold Glove winner last season, Robert is batting .316 with one homer and 11 RBIs.

White Sox outfielder Eloy Jiménez is expected to miss most of the season after rupturing his left pectoral tendon in an exhibition game. Outfielder Adam Engel strained a hamstring in spring training and is about three weeks away from a rehab assignment.