WAGE THEFT — U.S. companies that cheat their workers out of pay are unlikely to be fined or punished. Companies that hire child care workers, gas station clerks, restaurant servers and security guards are among the businesses most likely to get caught. By Alexia Fernández Campbell and Joe Yerardi of The Center for Public Integrity. SENT: 2,390 words, photos. An abridged version of 1,050 words is also available. With WAGE THEFT-SCHOOL WORKER — His paycheck bounced. It got worse from there; WAGE THEFT-METHODOLOGY. 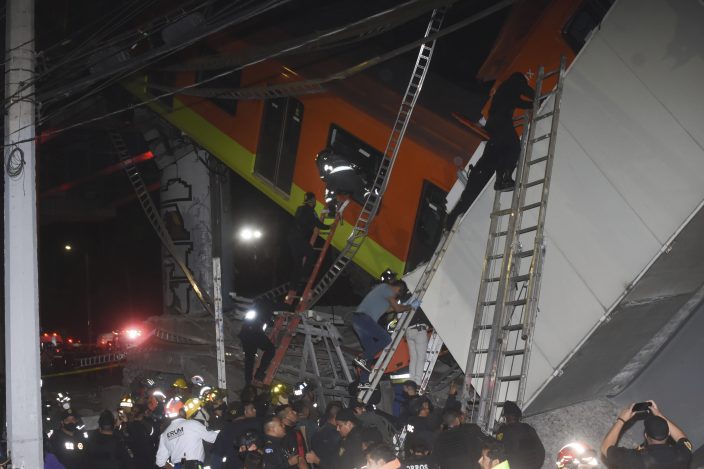 Mexico City fire fighters and rescue personnel work to recover victims from a subway car that fell after a section of Line 12 of the subway collapsed in Mexico City, Monday, May 3, 2021. The section passing over a road in southern Mexico City collapsed Monday night, dropping a subway train, trapping cars and causing at least 50 injuries, authorities said. (AP PhotoJose Ruiz)

VIRUS-OUTBREAK — COVID-19 infections and deaths are mounting with alarming speed in India with no end in sight to the crisis and a top expert warning that the coming weeks in the country of nearly 1.4 billion people will be “horrible.” India’s official count of coronavirus cases surpassed 20 million, nearly doubling in the past three months, while deaths officially have passed 220,000. Staggering as those numbers are, the true figures are believed to be far higher, the undercount an apparent reflection of the troubles in the health care system. By Aniruddha Ghosal. SENT: 800 words, photos.

MEXICO-METRO-COLLAPSE — An elevated section of the Mexico City metro collapsed, sending a subway car plunging toward a busy boulevard, killing at least 15 people and injuring about 70, city officials say. Mayor Claudia Sheinbaum said 34 of the injured were hospitalized, and people were still trapped inside the train, which was split in two and suspended. By E. Eduardo Castillo. SENT: 460 words, photos, video. 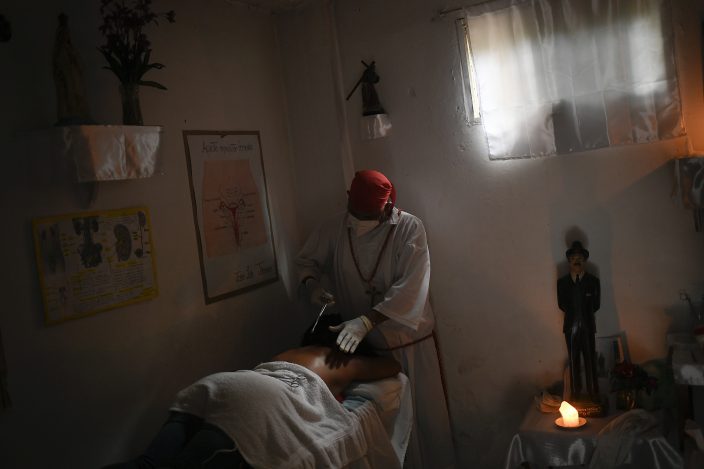 Johanna Torrealba is attended by healer Hermano Osvaldo for symptoms similar to COVID-19, at the Lino Valles Spiritual Center, in an area known as "The Alleyway of the Witches" in Caracas, Venezuela, Monday, May 3, 2021. Torrealba went to the center to treat a dry cough, chest pain, and physical exhaustion, symptoms she's had since having contact with a relative who died of respiratory arrest a few days ago. (AP PhotoMatias Delacroix)

UNITED STATES-IRAN — A flurry of diplomatic contacts and reports of major progress suggest that indirect talks between the U.S. and Iran may be nearing an agreement. That’s despite efforts by U.S. officials to play down chances of an imminent deal that would bring Washington and Tehran back into compliance with the 2015 nuclear deal. By Diplomatic Writer Matthew Lee. SENT: 900 words, photo.

BIDEN-REFUGEE CAP — President Joe Biden formally lifts the nation’s refugee cap to 62,500 this year, weeks after facing bipartisan blowback for his delay in lifting former President Donald Trump’s limit of 15,000. Biden says it was important to raise the number to show “America’s commitment to protect the most vulnerable.” By Matthew Lee, Zeke Miller and Julie Watson. SENT: 620 words, photos.

VIRUS OUTBREAK-VACCINE-TEENS — The U.S. Food and Drug Administration is expected to authorize Pfizer’s COVID-19 vaccine for kids ages 12 to 15 by next week, setting up shots for many before the beginning of the next school year. By Zeke Miller and Jonathan Lemire. SENT: 490 words, photo. 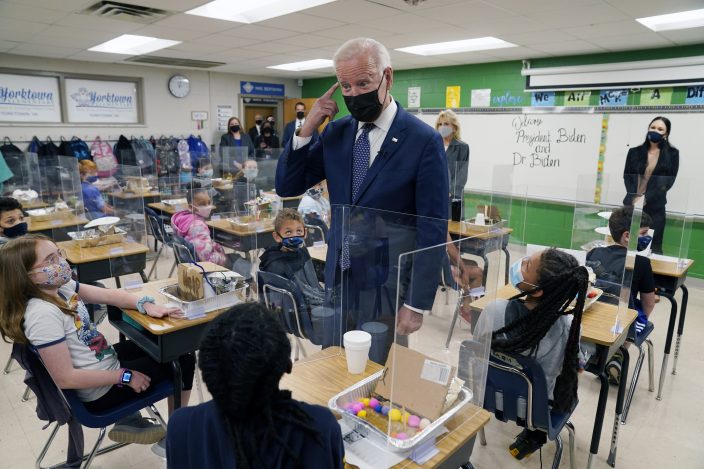 President Joe Biden gestures as he talks to students during a visit to Yorktown Elementary School, Monday, May 3, 2021, in Yorktown, Va., as first lady Jill Biden looks on. (AP PhotoEvan Vucci)

SUDAN-TIGRAYAN-REFUGEES’-DOCTOR — He is a surgeon and a father. Every morning, he wakes up under a plastic tarp and is reminded he’s now a refugee, too. Tewodros Tefera is one of more than 60,000 people who have fled ethnic violence in Ethiopia’s northern Tigray region, crossing the border into a remote corner of Sudan. Horrified by what he saw when the fighting between Ethiopian and Tigray forces began six months ago, and by the tales of new arrivals, the 44-year-old chronicles the pain even as he treats it. By Cara Anna. SENT: 790 words, photos. 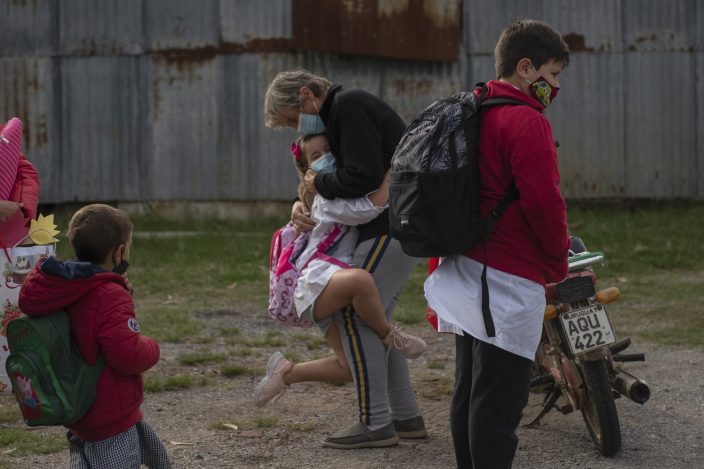 A student embraces a woman before entering school for the first time since it was closed due to the COVID-19 pandemic in Migues, Uruguay, Monday, May 3, 2021. Uruguay is returning on Monday to face-to-face classes in some rural schools that have fewer than 20 students total and one teacher. (AP PhotoMatilde Campodonico)

ITALY-POLICE-SLAYING-TRIAL — The pandemic was just bearing down on Italy when the trial began of two young American men, charged with the murder of Italian police officer near their hotel while they were on vacation in 2019. SENT: 790 words, photos. 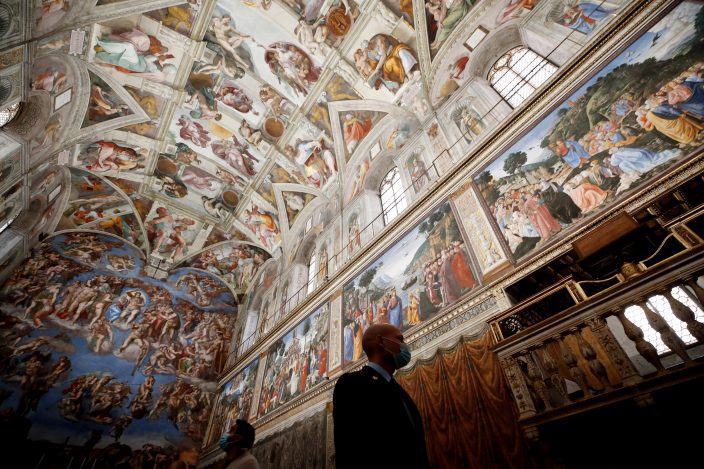 A museum employee wears a face mask to curb the spread of COVID-19 as he walks inside the Sistine Chapel of the Vatican Museums on the occasion of the museum's reopening, in Rome, Monday, May 3, 2021. The Vatican Museums reopened Monday to visitors after a shutdown following COVID-19 containment measures. (AP PhotoAlessandra Tarantino) 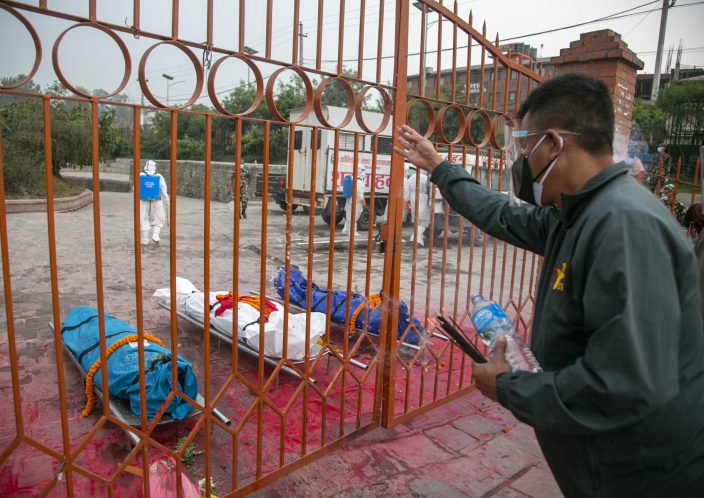 A family member pays his last tribute to bodies of COVID-19 victims before cremation near Pashupatinath temple in Kathmandu, Nepal, Monday, May 3, 2021. An infection surge in Nepal has prompted the government to impose new lockdowns in major cities and towns, restricting the movement of people and vehicles and shuttering markets, offices and schools. (AP PhotoNiranjan Shrestha)

TRUMP-REPUBLICANS — Trump and his supporters are intensifying efforts to shame — and potentially remove — members of the party who are seen as disloyal to the former president and his false claims that last year’s election was stolen from him. SENT: 850 words, photos. 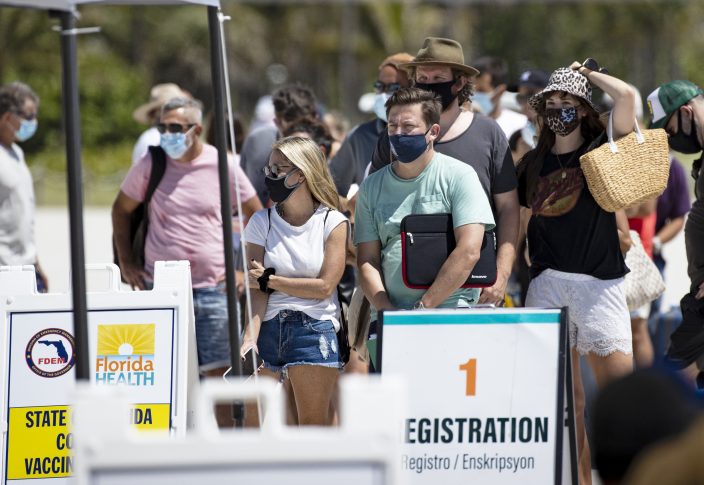 People line up to receive a Johnson & Johnson vaccine at the one-time pop-up vaccination site located 16th Street beach on the sand on Sunday, May 2, 2021 in Miami Beach. The one-time vaccination site made possible by Miami Beach Commissioner David Richardson and the Florida Division of Emergency Management will administer up to 250 Johnson & Johnson vaccines. (David SantiagoMiami Herald via AP)

SEVERE-WEATHER — Much of the South is again at risk of severe weather, forecasters say, after tornadoes struck parts of the region, causing heavy damage in some parts of Mississippi. SENT: 910 words, photos.

OHIO-STATE-TEAM-DOCTOR — Ohio State University says it is planning an individual settlement program that could help resolve more of the remaining claims over alleged sexual misconduct by Richard Strauss, the team doctor accused of abusing hundreds of young men during his two decades there. SENT: 520 words.

LEBANON-NO-JUSTICE — A recent public feud among prosecutors in Lebanon demonstrates how the country’s system of sectarian factions is paralyzing the judicial system and snarling attempts to root out corruption. SENT: 980 words, photos.

ISRAEL-POLITICS — Israeli Prime Minister Benjamin Netanyahu faced a midnight deadline on Tuesday to put together a new coalition government — or be looking at the possibility of leading his Likud party into the opposition for the first time in 12 years. SENT: 670 words, photo.

UNITED-NATIONS-CHINA-MYANMAR — China’s U.N. ambassador urges stronger diplomatic efforts to resolve the confrontation in Myanmar since the Feb. 1 military coup, warning that further violence could lead to a chaotic situation “and even a civil war.” SENT: 650 words, photos. With UNITED-NATIONS-CHINA-US-NORTH-KOREA — China: U.S. should push North Korea diplomacy, not pressure.

CARMELO ANTHONY-TOP 10 — Carmelo Anthony looked like he was all done just a couple of seasons ago. Now, he’s part of a truly exclusive club in the NBA. By Sports Writer Paul Newberry. SENT: 590 words, photos.