The PGA Championship field will start to take shape after this week with the top 70 on a special PGA Tour money list getting into the field. For the U.S. Open, anyone not already eligible who doesn’t crack the top 60 in the world ranking can go to one of 10 final qualifying sites in America.

The British Open feels more like a closed shop this year, though not by choice.

Early summer is when the Open offers qualifying spots to top finishers at European Tour and PGA Tour events. But those aren't available as the R&A tries to honor those who qualified for a major that was canceled last year because of the COVID-19 pandemic. 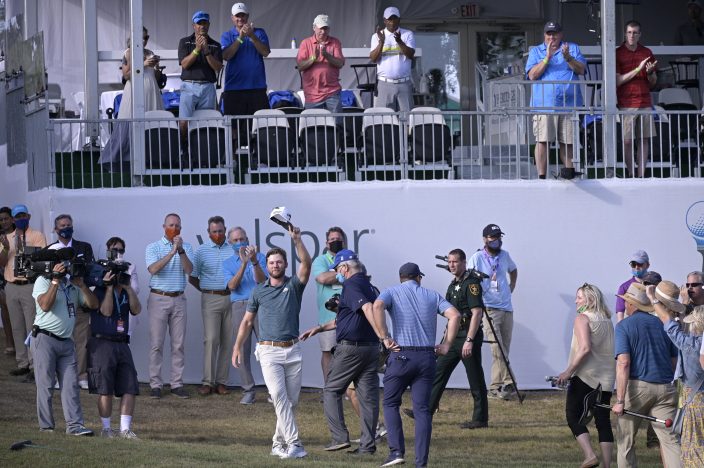 Sam Burns waves his hat to the crowd on the 18th green after winning the Valspar Championship golf tournament, Sunday, May 2, 2021, in Palm Harbor, Fla. (AP PhotoPhelan M. Ebenhack)

Once the top 50 in the world is determined on May 23, there are precious few spots for professionals available for Royal St. George’s on July 15-18.

There are eight qualifying spots in England. There are three spots for Japan Golf Tour events. And the R&A will take the leading five players from Europe and the PGA Tour points lists in late June provided they are among the top 20. Players also can qualify by winning the PGA Championship or U.S. Open, a slightly taller task.

The majors last year had to make adjustments to their criteria because of the pandemic. The Masters, postponed by seven months, chose to stick with its April field. The U.S. Open, postponed by three months in 2020, had to do without qualifying and came up with exemption categories that reflected a qualifying system. 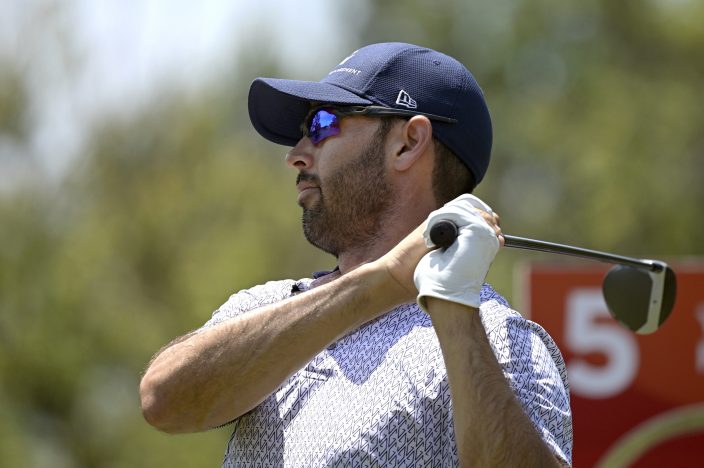 Cameron Tringale watches his tee shot on the fifth hole during the final round of the Valspar Championship golf tournament, Sunday, May 2, 2021, in Palm Harbor, Fla. (AP PhotoPhelan M. Ebenhack)

The British Open was canceled.

That means the four “Open Qualifying Series” sites that were held before the pandemic are being honored. Danny Lee, Joel Dahmen and Keith Mitchell were the leading three players from the top 10 at Bay Hill a year ago in March to earn spots. They will be in the field because the Open was not played last year. Mitchell and Lee have not finished in the top 10 since that week in Bay Hill.

Also in the field is those who made it to the Tour Championship in August 2019, a list that includes Lucas Glover and Chez Reavie.

“I guess it’s similar to how people feel about exemptions,” Glover said. “I earned my way in two years ago, so I should have played last year. So maybe I get to play this year.”

The R&A typically has 12 sites for its Open Qualifying Series. Last year the PGA Tour would have had such qualifiers at the Canadian Open, the Travelers Championship and the John Deere Classic. Europe lost out on sites in Germany, Ireland and Scotland.

Stewart Cink has won twice on the PGA Tour with his son serving as his new caddie. Ian Poulter wouldn't mind having those kind of results, although that's not why his son, Luke, will be on the bag this week at the Wells Fargo Championship.

Poulter rarely plays at Quail Hollow and his caddie, James Walton, had a 40th birthday trip planned by his wife. Poulter chose to play and didn't want to disrupt Walton's celebration at the beach.

So he's bringing along Luke, a junior in high school and aspiring player. Luke Poulter played in his first U.S. Open local qualifier last week in Florida, failing to advance.

Now he's coming to the big leagues in a different capacity.

“It will be nice for him to get a real inside look at what goes on between these silly ears,” Poulter said with a smile, pointing to his head. “It will be great for him in his learning experience of trying to become a tour player.”

Poulter said his son has been recruited by colleges and he hopes to make a commitment this summer.

“He loves the game. He wants to do what I do. It's the only thing that's going on in his brain,” Poulter said. "He'll go to college next August. He fully believes in his mind if he continues to work hard and keeps improving, he's going to have the opportunity.

“He's way further advanced than where I was. But I wasn't very advanced at 16.”

Luke is about 6-foot-2 and Poulter says he already has a higher swing speed and produces greater ball speed than his Ryder Cup star father.

Rickie Fowler is in a slump so severe that he no longer is among the top 100 in the world ranking, which made his invitation to the PGA Championship stand out.

But it’s not unusual.

While it’s not written as part of the criteria, the PGA Championship typically has the strongest field in golf and strives to get everyone from the top 100. Those who don’t otherwise qualify get an invitation, and the PGA of America every year goes outside the top 100. In some cases, the PGA doesn’t want to have a player do well enough to get into the top 100 and not be in the field.

Fowler fits that mold, along with the fact he played in the last Ryder Cup.

Another player would be Sam Burns.

Burns, a Jack Nicklaus Award winner as the best player in college when he was at LSU, was in his rookie year on the PGA Tour in 2019 and was at No. 108 in the world when he received an invitation to the PGA Championship at Bethpage Black.

“I wouldn’t say that I was surprised. I was happy,” Burns said. “But I think I had a chance to get in. It was definitely something I was excited just to have the opportunity.”

He tied for 29th that week.

Sam Burns has a history of football in his family. His passion was golf. He made a deal with his mother some 10 years ago that ostensibly took him to where he is now as a PGA Tour winner.

Burns said his father and brother played football at Louisiana Tech. He was in the eighth grade when he decided he wanted to focus on golf. His mother took it hard.

“She was just devastated because that was all she ever knew was going Friday night watching football,” Burns said after his win at the Valspar Championship. “And I said, 'Well, mom, how about if I played one more year, we can have a little putting green in the backyard, that way I can still practice after football practice.”

Mom agreed. Dad couldn't believe she agreed to it. But it worked.

“So that was good negotiating on my part,” Burns said with a grin.

Paula Creamer, who plans to return to the LPGA Tour in two weeks, was given a special exemption to the U.S. Women's Open at Olympic Club. Creamer won the 2010 Women's Open at Oakmont. ... Cameron Tringale tied for third at the Valspar Championship and earned $407,100, giving him career earnings on the PGA Tour of $13,743,938, the most of any player without a tour victory. Three players have earned more than $20 million with just one PGA Tour victory — Louis Oosthuizen, Tony Finau and Bo Van Pelt. ... The Players Championship has donated $50,000 to Edward Waters College to help reinstate the women's golf program at the historically Black college in Jacksonville. ... The KPMG Women's PGA Championship outside Atlanta in late June plans to have 8,000 spectators a day.

“We're never as far off as we think we are.” — Justin Thomas.