Carolina's top line is rolling now with Teuvo Teravainen back from a lengthy absence.

It's a key reason why the Hurricanes are surging toward the postseason in pursuit of the Presidents' Trophy.

Andrei Svechnikov ended an eight-game goal drought by scoring twice in Carolina's 6-3 win against the Chicago Blackhawks on Tuesday night, keeping the Hurricanes in control of the race for home-ice advantage throughout the playoffs. 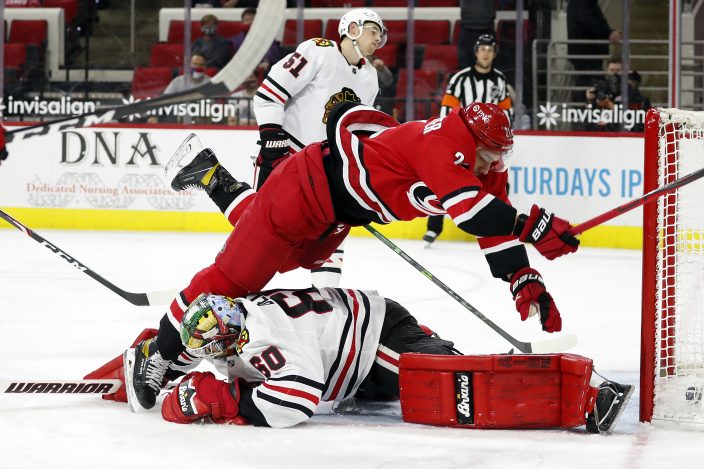 Carolina Hurricanes' Nino Niederreiter (21) collides with Chicago Blackhawks goaltender Collin Delia (60) after scoring a goal during the second period of an NHL hockey game in Raleigh, N.C., Tuesday, May 4, 2021. (AP PhotoKarl B DeBlaker)

Svechnikov also had an assist on Teravainen's third-period goal for the Hurricanes, who rallied from a 2-0 deficit. Teravainen also had a three-point game, assisting on both of Svechnikov's goals. The line's third member, Sebastian Aho, followed his hat trick in Monday's win against the Blackhawks with a pair of third-period assists to push his point streak to nine games.

It's a reminder of just how good Carolina's top line can be now that Teravainen is back after missing 32 of 33 because of a concussion.

“They're not the biggest, not the most physical line," said Carolina defenseman Jaccob Slavin, who had two assists. “But their hockey sense is through the roof and obviously their skill is with the best of them.” 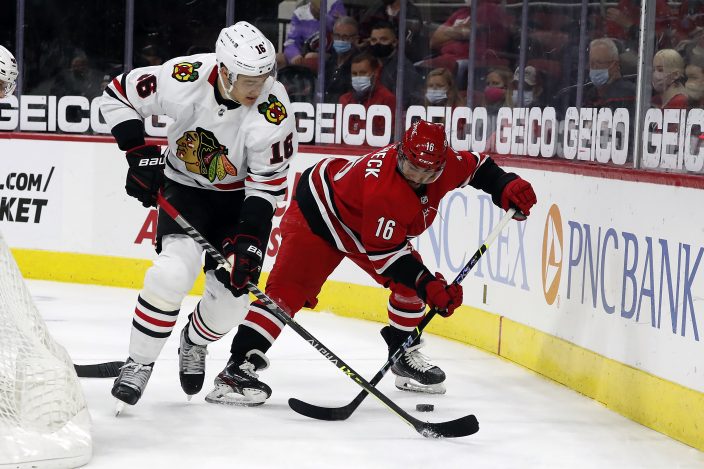 Carolina Hurricanes' Vincent Trocheck (16) is pestered by Chicago Blackhawks' Nikita Zadorov (16) behind the net during the second period of an NHL hockey game in Raleigh, N.C., Tuesday, May 4, 2021. (AP PhotoKarl B DeBlaker)

Nino Niederreiter scored twice and joined Martin Necas with an empty-net goal to clinch this one, while Petr Mrazek finished with 27 saves in his first appearance in nearly two weeks after suffering a lower-body injury.

Carolina won its fifth straight game and claimed at least a point for the 12th straight outing.

“It wasn't a great game tonight,” coach Rod Brind'Amour said. “We got by with a lot of good efforts. The talent we have on the team kind of won us this game, but it wasn't pretty.” 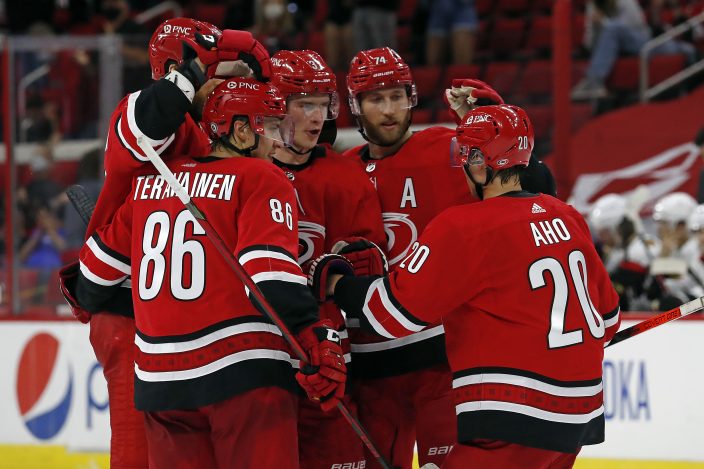 Carolina Hurricanes' Andrei Svechnikov, center, is congratulated on his goal by teammates during the second period of an NHL hockey game against the Chicago Blackhawks in Raleigh, N.C., Tuesday, May 4, 2021. (AP PhotoKarl B DeBlaker)

Alex DeBrincat scored twice for the Blackhawks, who were eliminated from the playoff race with Monday's 5-2 loss here. This was Chicago's sixth straight loss.

The Blackhawks jumped to a 2-0 first-period lead when DeBrincat got loose on a short-handed breakaway, followed by the first NHL goal for Mike Hardman.

That lead wouldn't hold, as Niederreiter and Svechnikov each scored in the second period — followed by the Hurricanes rolling to four third-period goals. Necas' goal proved critical to closing this one out, as he scored from nearly center ice only seconds after the Blackhawks had pulled Collin Delia on a late power play facing a 4-3 deficit. 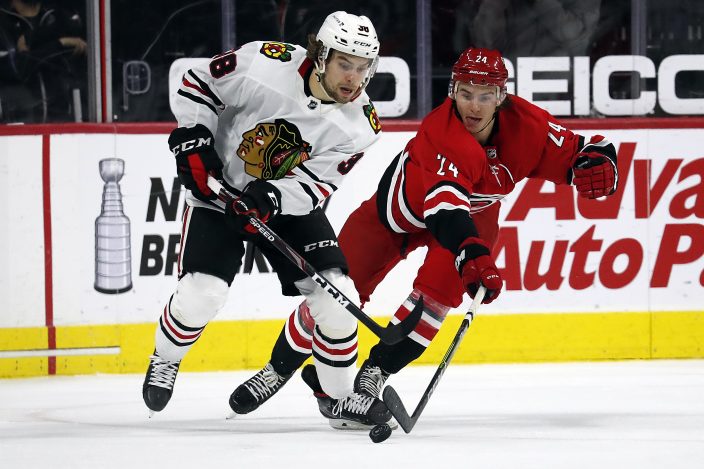 Carolina Hurricanes' Jake Bean (24) battles for the puck with Chicago Blackhawks' Brandon Hagel (38) during the second period of an NHL hockey game in Raleigh, N.C., Tuesday, May 4, 2021. (AP PhotoKarl B DeBlaker)

“We’re learning some hard lessons for sure," Blackhawks coach Jeremy Colliton said. “We want to win hockey games. We want to find 60 minutes of consistency, and that’s where we’re at.”

Teravainen has scored in three of five games since his return. 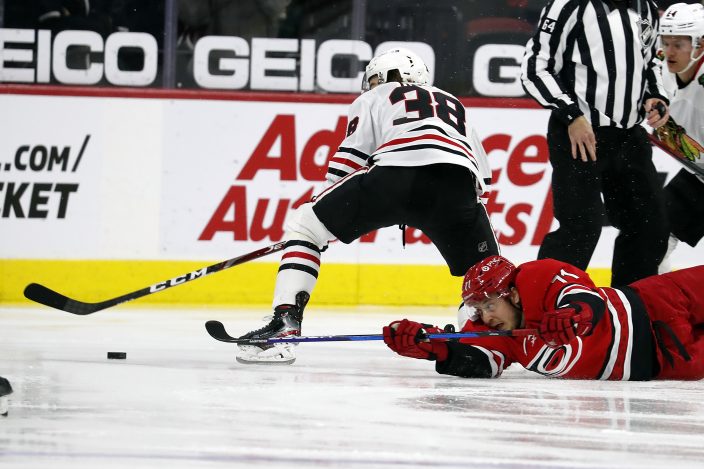 Carolina Hurricanes' Jesper Fast (71) collides with Chicago Blackhawks' Brandon Hagel (38) and loses control of the puck during the first period of an NHL hockey game in Raleigh, N.C., Tuesday, May 4, 2021. (AP PhotoKarl B DeBlaker)

“We have a couple of more games for sure and these are good games for me to get in my game and get my feel for the puck and that kind of stuff,” Teravainen said.

Svechnikov, who scored on a wrister from near the blue line and then a forehand-backhand move on a breakaway, scored for the first time since April 19 at Tampa Bay. 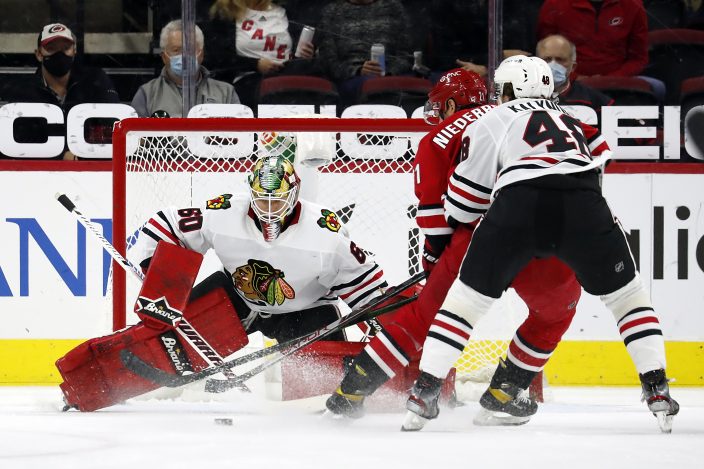 Carolina Hurricanes' Nino Niederreiter (21) shoots the puck at Chicago Blackhawks goaltender Collin Delia (60) while being defended by Blackhawks' Wyatt Kalynuk (48) during the first period of an NHL hockey game in Raleigh, N.C., Tuesday, May 4, 2021. (AP PhotoKarl B DeBlaker)

Carolina was the only one of those teams in action Tuesday night on a light five-game league slate. 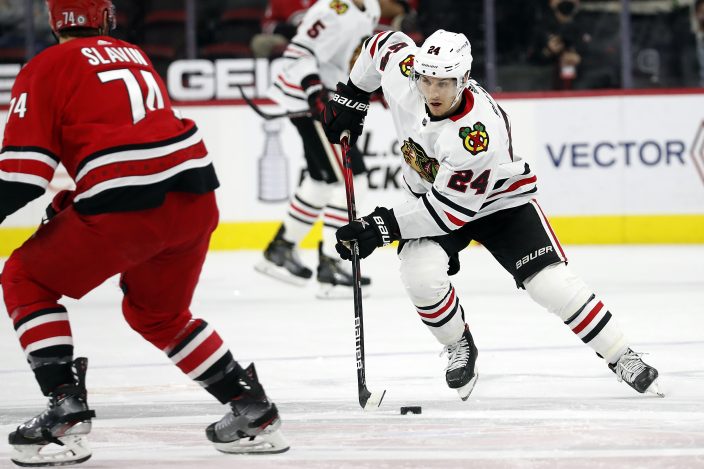 Chicago Blackhawks' Pius Suter (24) works the puck against Carolina Hurricanes' Jaccob Slavin (74) during the first period of an NHL hockey game in Raleigh, N.C., Tuesday, May 4, 2021. (AP PhotoKarl B DeBlaker)

Delia didn't allow a goal in 19 shots after taking over for Malcolm Subban down 4-0 midway through the second period of Monday's loss. It had been only his third appearance all season and first since Jan. 17, which came after Colliton said the team had planned to give Delia some late-season work.

He got the start Tuesday and denied the Hurricanes for another period before Niederreiter finally broke through with a put-away near the top of the crease off Morgan Geekie's feed — which began with Geekie's botched attempt at mimicking Svechnikov's lacrosse-style goal from behind the net — at 4:32 of the second period.

“Not much to complain about there,” Colliton said. “I thought he was good.”

The teams take a day off before closing their three-game set Thursday in the Hurricanes' final home game.