India's government faced calls for a strict lockdown to slow a devastating surge in new coronaviorus cases, and a court in New Delhi on Wednesday will decide whether to punish officials for failing to end a 2-week-old erratic supply of oxygen to overstretched hospitals.

With 382,315 new confirmed cases, India's tally has risen to more than 20.6 million since the pandemic began. The Health Ministry on Wednesday also reported 3,780 deaths in the last 24 hours, bringing the total to 226,188. Experts believe both figures are an undercount.

Rahul Gandhi, a leader of the opposition Congress party, said this week "a lockdown is now the only option because of a complete lack of strategy by the Indian government.” 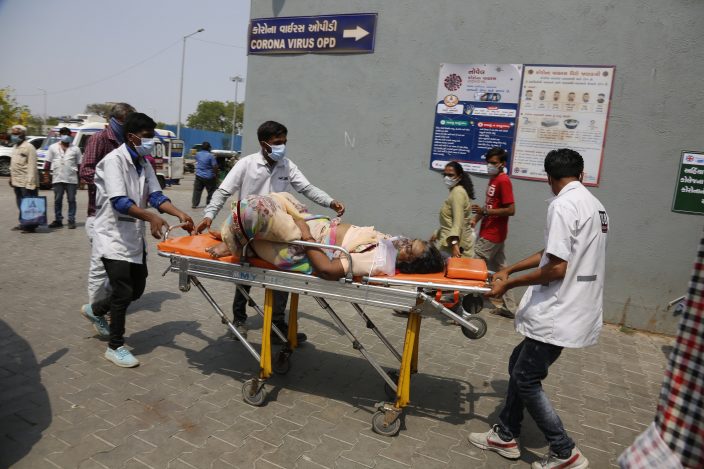 FILE - In this April 27, 2021, file photo, health workers bring a patient to be admitted at a government COVID-19 hospital in Ahmedabad, India. The country has witnessed scenes of people dying outside overwhelmed hospitals, funeral pyres lighting up the night sky and authorities getting requests to cut down trees in parks because crematoriums have run out of fuel. (AP PhotoAjit Solanki, File)

The New Delhi High Court will decide whether to press contempt charges against officials for defying its order to meet oxygen requirements of more than 40 hospitals in the capital. Those found guilty face six months in prison or a fine.

"You can put your head in the sand like an ostrich, we will not. We are not going to take no for an answer,” Justices Vipin Sanghi and Rekha Palli said. 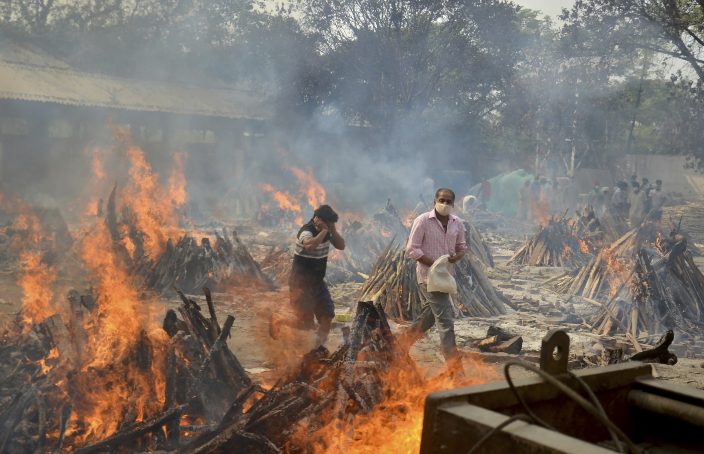 FILE - In this April 29, 2021, file photo, relatives react to heat emitting from the multiple funeral pyres of COVID-19 victims at a crematorium in the outskirts of New Delhi, India. COVID-19 infections and deaths are mounting with alarming speed in India with no end in sight to the crisis. People are dying because of shortages of bottled oxygen and hospital beds or because they couldn’t get a COVID-19 test. (AP PhotoAmit Sharma, File)

The grim reality is that hospitals are reducing the number of beds and asking patients to move elsewhere, the judges said. The court is hearing petitions filed by several hospitals and nursing homes struggling with irregular oxygen supplies.

Raghav Chaddha, a spokesman for the Aam Aadmi Party governing New Delhi, said hospitals were getting only 40% of their 700 metric tons (772 U.S. tons) requirements through the federal government, and the local government was arranging additional supplies to meet the shortfall and setting up new oxygen plants.

The latest wave of infections since April has pushed India’s health care to the brink with people begging for oxygen cylinders and hospital beds on social media and news channels. 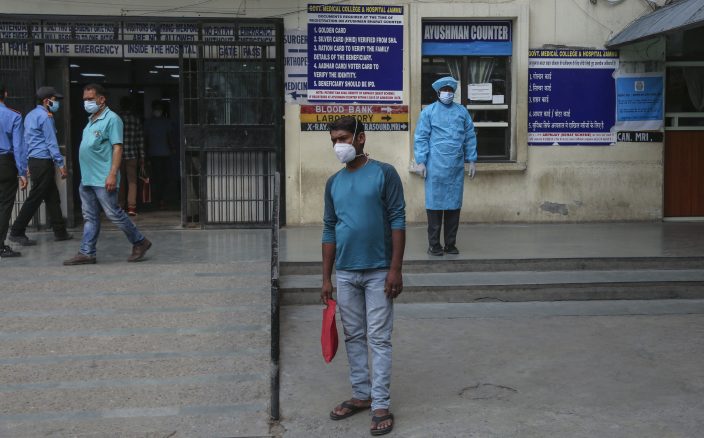 An Indian man wearing face mask as a precaution against the coronavirus waits to enter a goverment Hospital in Jammu, India, Tuesday, May 4, 2021. COVID-19 infections and deaths are mounting with alarming speed in India with no end in sight to the crisis. (AP PhotoChanni Anand)

Bodies have been piling up at cremation grounds and in graveyards with relatives waiting for hours for the last rites.

Dileep Kumar, a student, said he was asked by hospital authorities to shift his father to another hospital in Ghaziabad, a town on the outskirts of New Delhi, after it ran out of oxygen on Tuesday.

Authorities are scrambling to add more beds, sending oxygen from one corner of the country to another, and scaling up manufacturing of the few drugs effective against COVID-19. 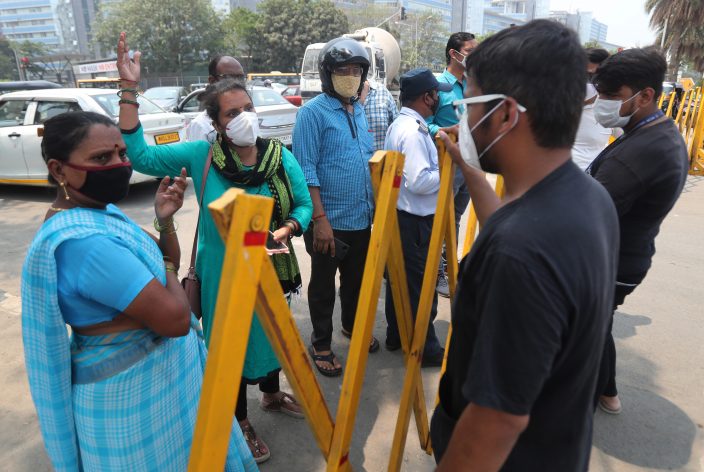 A woman who was turned back following shortage of COVID-19 vaccine argues with a doctor at a vaccination center in Mumbai, India, Monday, May. 3, 2021. COVID-19 infections and deaths are mounting with alarming speed in India with no end in sight to the crisis and a top expert warning that the coming weeks in the country of nearly 1.4 billion people will be “horrible.” (AP PhotoRafiq Maqbool)

Prime Minister Narendra Modi’s government is reluctant to impose a national lockdown for fear of the economic fallout. Modi said last month that it should be the last resort.

But nearly a dozen states have imposed curbs on their own.

The most populous state of Uttar Pradesh, with 200 million people, implemented a five-day lockdown this week. The country’s second and third most populated states of Maharashtra and Bihar are also under lockdown with varying curbs.

Efforts to scale up the vaccination drive are hampered by the shortage of doses. India, a country of 1.4 billion, has so far administered 160 million doses.

The global community is extending a helping hand. The United States, Britain, Germany and several other nations are rushing therapeutics, rapid virus tests and oxygen to India, along with some materials needed for India to boost its domestic production of COVID-19 vaccines.