Connor McDavid is within reach of a milestone that could go down in hockey history.

McDavid needs seven points in Edmonton's final five games to reach 100 in 56 games during this shortened NHL season. Getting there would be an achievement remembered alongside Wayne Gretzky's 50 goals in 39 games, but the Oilers captain is far more worried about the 16 victories needed to win the Stanley Cup than the chase for 100 points.

“It’s a number,” McDavid said Monday night. “If I get there, great. If not, it’s not the end of the world, either. The most important thing is our team is gearing up for the playoffs and making sure we’re firing on all cylinders in Game 1.” 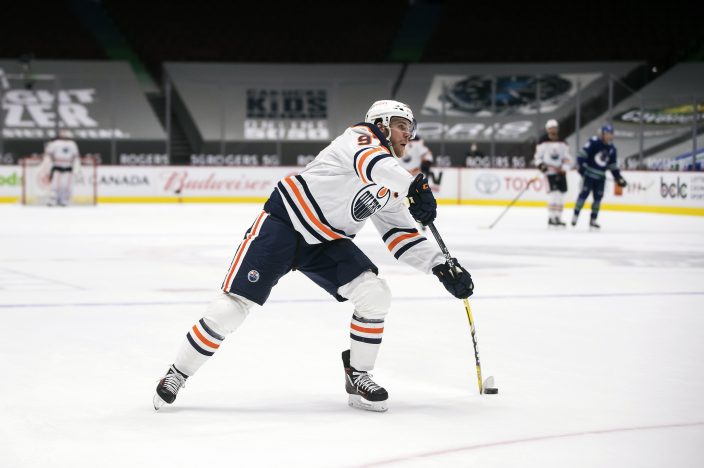 Edmonton Oilers' Connor McDavid scores into the empty net to record his fourth point during the third period of an NHL hockey game against the Vancouver Canucks, Monday, May 3, 2021, in Vancouver, British Columbia. (Darryl DyckThe Canadian Press via AP)

McDavid, teammates and coach Dave Tippett are tempering expectations and shifting focus to the postseason, a place the world's best hockey player has really only been once in six pro seasons. Edmonton fizzled out in the expanded, 24-team bubble playoffs last year, and that only fired up McDavid more to get into the round of 16 and beyond.

The result has been a points-per-game average topped only 23 times since the expansion era began in 1967. The list of those seasons is full of Hall of Famers, including Gretzky (11 times) and Mario Lemieux (6).

“He's proven very difficult to keep off the scoresheet this year, and he plays the right way every night,” Oilers defenseman Tyson Barrie said. “He hasn’t taken any nights off, which is pretty incredible. It’s been impressive to watch this year and fun to be a part of.” 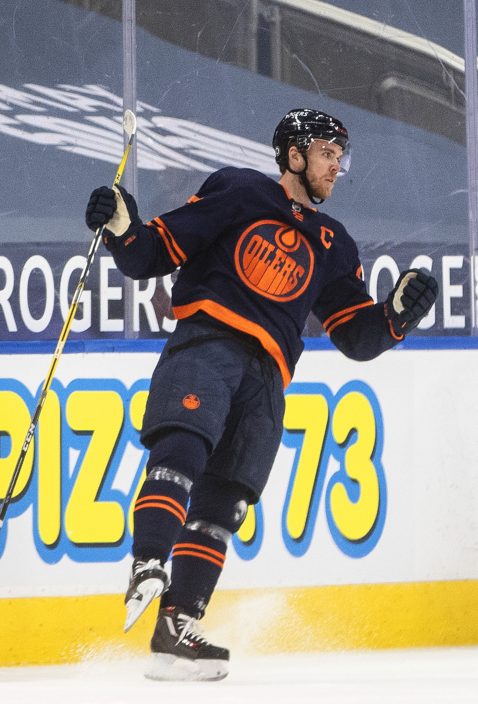 Edmonton Oilers' Connor McDavid celebrates a goal against the Calgary Flames during the first period of an NHL hockey game Saturday, May 1, 2021, in Edmonton, Alberta. (Jason FransonThe Canadian Press via AP)

McDavid is the leading candidate to win the Hart Trophy as NHL MVP, which he won the first time in 2017 when Edmonton made a run to the Western Conference final. He led the league with 100 points that season and had 108 the next year.

Getting 100 in 56 games would be on another level. With the Oilers all but locked into second place in the North Division, McDavid's race to 100 is the last notable goal during the regular season.

“We’re going to try to get him there as best we can, but he can get ’er done on his own if he needs to,” Barrie said.

Tippett said this season will be a memorable one regardless of the 24-year-old center's points total. Perennial postseason success is the next thing in reach for the Oilers.

“He’s the captain and the leader of our team; he wants our team to play well,” Tippett said. “He wants to be a playoff team year after year and give himself a chance to win the Stanley Cup, so he’s very motivated.”

Goaltender Michael Houser is six years removed from being an American Hockey League regular, and his last start came March 7, 2020, with Cincinnati of the ECHL. That only made Houser's 34-save victory in his NHL debut Monday night for Buffalo all the more of an accomplishment.

"I was really excited to play behind six NHL defensemen," Houser said. “Anytime you’re in the (ECHL) it seems like it’s quite a jump to get there. ... But they always tell you to stay ready.”

A handful of teams are still in the running for the Presidents' Trophy and home-ice advantage throughout the playoffs. Carolina is firmly in the driver's seat there, especially after Vegas blew a 5-3 lead and lost at Minnesota on Monday night.

Florida, Tampa Bay, Colorado, Toronto and Washington are also in contention near the end of a season with all no crossover play out of division. Who's the best team? No one really knows.

St. Louis visits Vegas on Saturday in what could be a preview of a first-round series in the West.