The Mets will see how ace Jacob deGrom fares this week after being scratched from his scheduled start Tuesday at St. Louis when he had trouble getting loose during a pregame stretch. The game was rained out and will be made up Wednesday as part of a single-admission doubleheader. 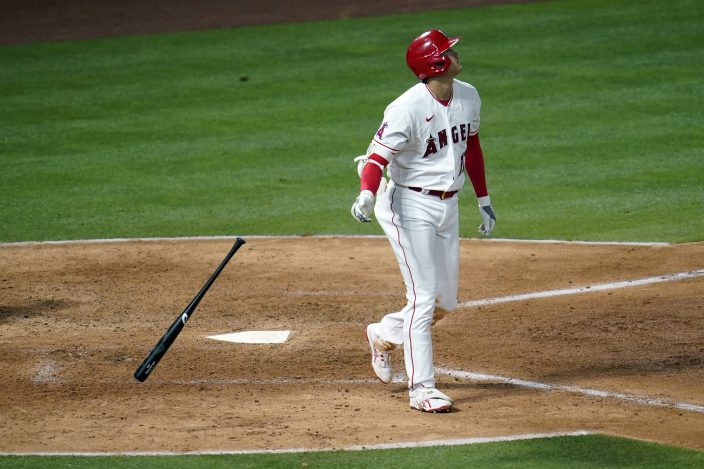 Los Angeles Angels' Shohei Ohtani drops his bat as he hits a two-run home run during the sixth inning of a baseball game against the Tampa Bay Rays Monday, May 3, 2021, in Anaheim, Calif. (AP PhotoMarcio Jose Sanchez)

The team said deGrom had inflammation in his right lat and wouldn't throw for the next few days.

The two-time NL Cy Young Award winner has been baseball’s most dominant pitcher this season, with a major league-best 0.51 ERA in five starts, 59 strikeouts in 35 innings and just four walks.

Still, he is just 2-2 as New York continues to have trouble scoring runs for him. 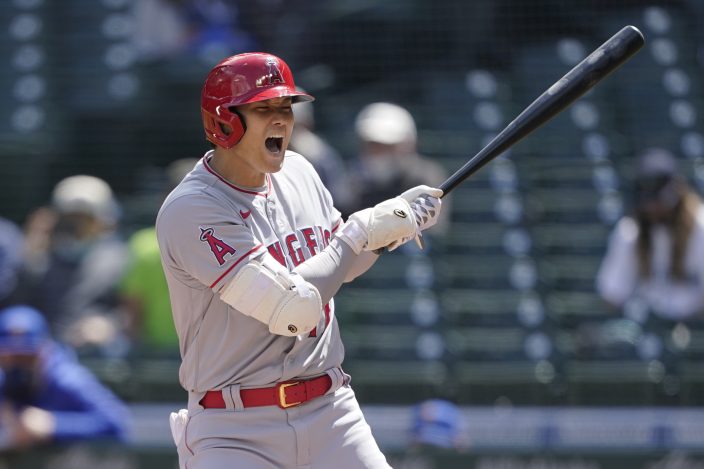 Los Angeles Angels' Shohei Ohtani reacts after being hit by a pitch during the first inning of a baseball game against the Seattle Mariners, Sunday, May 2, 2021, in Seattle. (AP PhotoTed S. Warren)

NL batting champion Juan Soto will be limited to pinch-hitting duty for now with Washington after coming off the injured list.

Soto missed 10 games with a strained left shoulder and wasn’t in the starting lineup Tuesday night against Atlanta. Manager Dave Martinez said the injury no longer bothers Soto while hitting, but he is not yet ready to play the outfield. 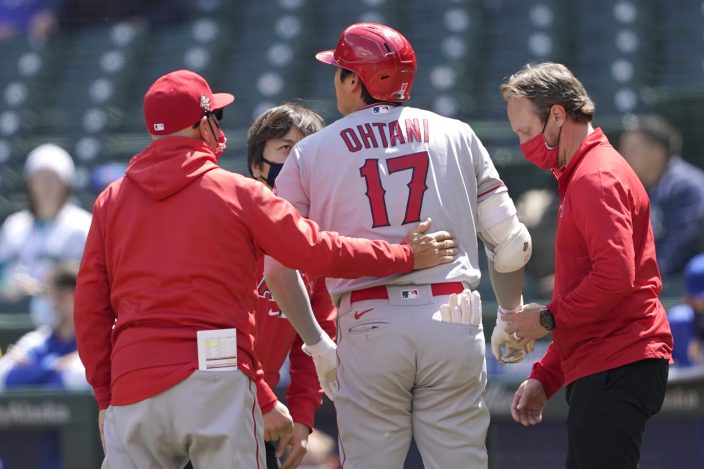 Los Angeles Angels Shohei Ohtani (17), talks with a trainer, right, and manager Joe Maddon, left, after he was hit by a pitch during the first inning of a baseball game against the Seattle Mariners, Sunday, May 2, 2021, in Seattle. Ohtani stayed in the game. (AP PhotoTed S. Warren)

Soto was hitting .300 with two homers and eight RBIs in 14 games before getting hurt. He hit an NL-best .351 in the pandemic-shortened 2020 season.

Martinez did not provide a timetable for when Soto would return to right field but said he likely would be the designated hitter during this weekend’s interleague series at Yankee Stadium.

Shohei Ohtani (1-0, 3.29 ERA) makes his fourth start on the mound this season for the Los Angeles Angels after a two-day delay because he got hit on the right elbow by a fastball in Seattle last Sunday. The two-way star is also expected to hit against the AL champion Rays.

Hours after Dodgers star Clayton Kershaw had the shortest outing of his sensational career in a loss at Wrigley Field, Colorado starter German Marquez fared even worse at Coors Field.

Kershaw lasted just one inning Tuesday, allowing four runs and falling to the Cubs 7-1 in the first game of a doubleheader. The three-time NL Cy Young Award winner threw 39 pitches and was done.

“It wasn’t good,” Kershaw said. “There’s really nothing you can do at this point. It’s embarrassing. No excuses. I was horrible. I just put our team in a really bad spot with a doubleheader.”

Manager Dave Roberts called it “an outlier of an outing” and said Kershaw was “fine, health-wise.”

Marquez didn’t do the Rockies’ bullpen any favors, either, chased by the Giants in a 10-run first inning. He got only two outs before getting pulled, charged with eight runs on six hits and two walks.

The Dodgers and Rockies are both back in action after their relievers got a workout.

Cleveland ace Shane Bieber tries to keep up his string of strikeouts when he starts at Kansas City.

The reigning AL Cy Young Award winner has fanned at least eight batters in a major league-record 18 straight starts. Bieber had shared the mark set by Randy Johnson in 1999-2000, then broke it by striking out 11 against the White Sox last week.

Baltimore left-hander John Means (3-0, 1.70 ERA) has been among the best pitchers in the majors this season. He’s coming off two wins against Oakland and now starts at Seattle.

An All-Star in 2019 before going 2-4 last year, Means gave up a season-high three runs in five innings against the Mariners on April 13.

The 33-year-old who played 14 seasons in his homeland has allowed two runs in 8 2/3 innings since joining the Rangers. Yang will pitch at Minnesota in place of Kohei Arihara, who got an injection for a sore right middle finger.

The end for the Brooklyn Nets came ...