The government of Prime Minister Prayuth Chan-o-cha is facing mounting criticism for its handling of a surge that began in early April.

Thailand recorded 2,112 new cases and 15 deaths on Wednesday. The country has been reporting about 2,000 cases a day recently, often with double-digit deaths in the third mass outbreak since the pandemic started. 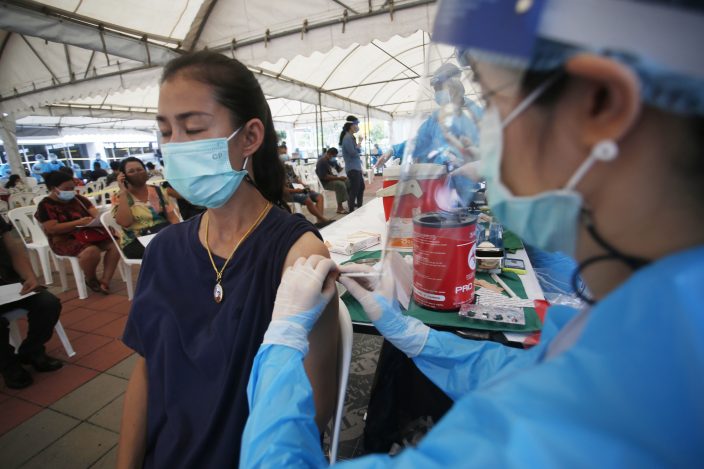 In this Tuesday, May 4, 2021, photo, a health worker administers a dose of the Sinovac COVID-19 vaccine to residents of the Klong Toey area, a neighborhood currently having a spike in coronavirus cases, in Bangkok, Thailand. Health officials rushed to vaccinate thousands of people in Bangkok's biggest slum on Wednesday as a new surge in COVID-19 cases spread through densely populated low-income areas located in the capital's central business district.(AP PhotoAnuthep Cheysakron)

More than half of the 74,900 cases reported by the Centre for COVID-19 Situation Administration, or 46,037, have been confirmed since April 1. A total of 318 people are known to have died from the virus.

The CCSA said about 30,000 people were being treated in hospitals and in field hospitals constructed to make up for the lack of enough hospital beds and intensive care units, especially in Bangkok.

Thailand had managed to control the spread of the virus by closing its borders to almost all travelers and then imposing lengthy mandatory quarantines. Apart from that, life had largely returned to normal before the latest surge, which began in nightclubs and bars in Bangkok. 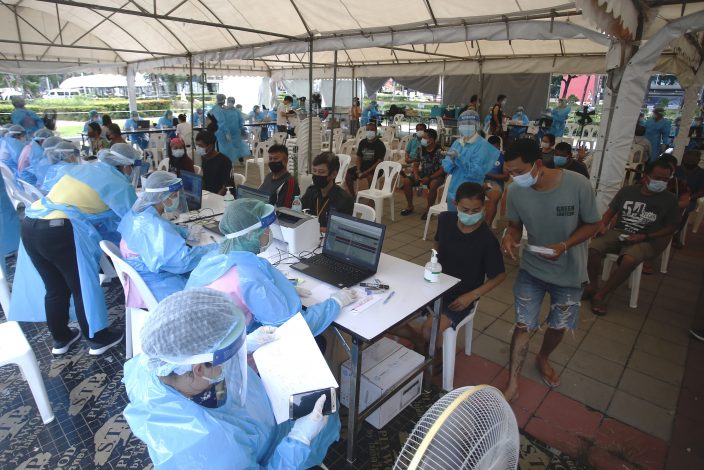 In this Tuesday, May 4, 2021, photo, residents of the Klong Toey neighborhood, an area with a current spike in coronavirus cases, wait to receive the Sinovac COVID-19 vaccine in Bangkok, Thailand. Health officials rushed to vaccinate thousands of people in Bangkok's biggest slum on Wednesday as a new surge in COVID-19 cases spread through densely populated low-income areas located in the capital's central business district. (AP PhotoAnuthep Cheysakron)

Health officials warned that caseloads were bound to jump after millions traveled around the country during Songkran national holidays in mid-April, even as authorities were urging people to stay home and take more precautions against the virus.

The country has vaccinated only 2% of its 60 million people in a faltering, delayed inoculation program as the government initially chose to use only two vaccines, China's Sinovac and one made by AstraZeneca.

Officials say they will begin supplying millions of vaccines in June with the aim of vaccinating 70% of the population in 2021.

The current outbreak spread from night entertainment spots to the Klong Toey area, Bangkok's largest slum with about 100,000 people living in a 1 square mile area. There, health workers are trying to vaccinate up to 3,000 people per day, hoping to have at least 50,000 people inoculated within two weeks. They are also testing intensively to try to identify and isolate those who are infected.

But that may not be enough, local leaders say.

“There are all kinds of people in Klong Toey, from day laborers and taxi drivers to business owners. They travel to work in different areas, not only in Bangkok but also other provinces. We cannot seal the area and cannot stop them from moving around,” Sittichat Angkhasittisiri, chairman of the Klong Toey Block 1-2-3 community, told The Associated Press.

On Wednesday, many newly reported cases were in the nearby Lumphini district, which is home to nearly 30,000 people, most of them also living in crowded old houses in narrow alleys squeezed between massive construction projects, canals, factories, expressways and embassies.

“We found a confirmed case on April 20. He tried to get a (hospital) bed but could not, so finally he had to isolate himself in his car . . . because he was afraid of spreading it to family members,” Angkhasittisiri said. “After that, more cases were found. “

“Many of them are told to stop working when people know they are from Klong Toey. Plus, it is not easy at all when those high risk people have to keep themselves in very small places for two weeks. I am very worried about their mental health,” she said.

“If we had gotten vaccines since the beginning of this year, we would not face a situation like this.”

The local AstraZeneca producer hopes to start distributing its first batch of locally made vaccines in June — and about 16 million people have registered. Inoculations will prioritize people over 60 or those with pre-existing medical conditions.

The tens of thousands of foreigners legally living in Thailand do not know if there will be any way to be vaccinated anytime soon.

“The vaccines right now are only reserved for Thai people who are now at a high-risk level or living in the severe outbreak areas. Expats should wait for a clear policy from the government," the newspaper Bangkok Post quoted Rungrueng Kitphati, spokesperson for the Public Health Ministry, as saying. ″There will soon be a surplus of vaccines so it will not be difficult to get them.”

Thailand had begun moving to revive its devastated tourism industry in July by allowing vaccinated foreigners to visit tourist resorts such as Phuket. It's unclear if those plans will go ahead.