Two police officers raised their weapons while sheltering behind a tree in a Portland park. They yelled at a homeless man to put up his hands. Moments later, two shots rang out. The man collapsed onto the grassy field.

A replica gun with an orange tip was found at the scene on April 16. But some key details are unclear, including whether the fake weapon was in Robert Delgado’s possession during the deadly encounter, or if he pointed it at officers.

Police have been tight-lipped, citing an ongoing investigation, and the only video from the scene — 11 minutes of footage taken by bystanders, not officers — shows just a portion of what happened. 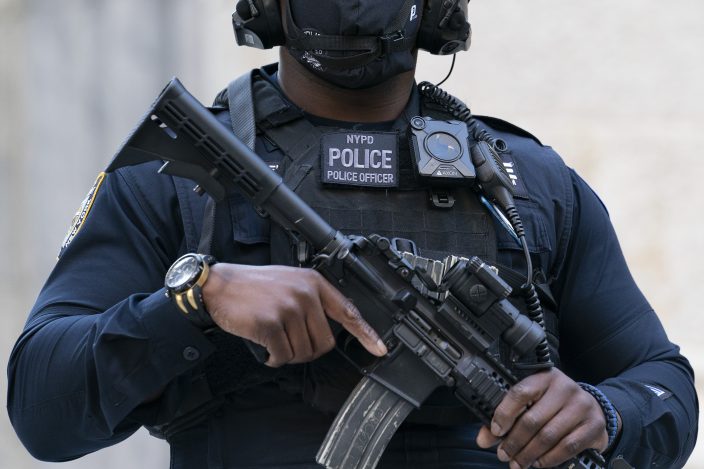 FILE - In this Oct. 5, 2020, file photo, a New York Police Department's counterterrorism officer stands outside St. Patrick's Cathedral wearing a body camera in New York. Portland, Ore., which has become the epicenter of racial justice protests, is one of the few major U.S. cities where police do not have body cameras. City leaders and police have advocated for the use of body cameras which proponents say promote accountability. But officials say the department does not have the funds, following the mayor and City Council's decision to cut millions of dollars from the police bureau's budget in 2020. (AP PhotoMark Lennihan, File)

Portland, which has become an epicenter of racial justice protests, is one of the few major U.S. cities where police are not required to wear body cameras, while elsewhere such footage is increasingly being released to provide an unaltered view of deadly incidents.

For years, city leaders and Portland police have advocated for the use of body cameras, stating they promote accountability and transparency.

But officials say the department lacks the funds following city leaders' decision last year to cut millions from its budget amid local and national calls to reform policing systems by “defunding” law enforcement and shifting money to other efforts.

“It’s gotten to the point now, if you don’t have a body cam policy, people wonder why," said Geoffrey Alpert, a criminal justice professor at the University of South Carolina. "And while it’s really expensive, I think it’s important to get these things down on video as much as possible because otherwise we’re relying on written reports and then they can be inconsistent and not be remembered as well."

Delgado's family is relying on bystander video, police radio transmissions, photos and witness testimony to try to piece together what happened. Officer Zachary DeLong killed Delgado, 46, after responding to Lents Park on reports of a man “quick drawing” and holding what looked like a handgun. He shot Delgado from a distance of about 90 feet (27 meters).

“The investigation is still underway, and we are waiting for information,” said Ashlee Albies, the attorney for Delgado’s family. “What we have seen from the videos and from witness statements is deeply disturbing and alarming.”

Since 2010, Portland police have shot and killed 27 people, according to data from the department. Three of those cases remain under investigation, while a grand jury found all but one other were justified.

Statewide, body camera recordings exist for just seven of the past 100 deadly shootings by police, according to a Washington Post analysis.

In recent years, body camera footage has played a pivotal role in examining the use of force in police-involved fatalities across the U.S.

During the trial of Derek Chauvin, who was convicted of the murder and manslaughter of George Floyd, prosecutors showed footage from cameras worn by the former Minneapolis police officer and three colleagues. In the video, a handcuffed Floyd said he couldn’t breathe as Chauvin kept his knee on the 46-year-old Black man’s neck for 9 minutes, 29 seconds.

In just the past month, police departments have released body camera footage of other deadly encounters: the shooting of 16-year-old Ma’Khia Bryant, as she swung a knife toward another girl, by a Columbus, Ohio, police officer; 13-year-old Adam Toledo appearing to drop a handgun and begin raising his hands less than a second before he was shot by a Chicago officer; and an hourlong video from Alameda, California, police that shows 26-year-old Mario Gonzalez dying after officers pinned him to the ground face down for more than five minutes.

"There’s a lot of agencies that have them, and they help them in situations like this and also just call-taking, even crowd control, public order-type events," Lovell said Tuesday.

Body-worn cameras are becoming a police standard nationwide, and have been acquired by over 80% of departments with more than 500 officers, according to 2016 U.S. Justice Department statistics.

Some departments implemented body camera policies after high-profile killings of Black people by white officers, including in places like Ferguson, Missouri, and Baltimore.

But not all have followed suit.

The Arizona Department of Public Safety, the state's largest police agency, does not have a requirement for its officers to wear cameras and has a relatively small number of cameras. New Orleans police use body cameras, but some nearby suburban departments don’t.

Portland police are also hopeful the devices will soon become a reality in the country's 26th most populous city.

During recent bargaining talks, the Portland Police Association made a proposal that “included the issue of” body cameras, according to a statement from city officials. Specifics were not yet available.

In 2019, the Portland Police Bureau revived plans to pursue a body camera pilot program that was supposed to be implemented in 2020 and 2021. The bureau estimated it would cost roughly $2.9 million to get a body-worn camera program up and running, with ongoing costs of about $1.8 million a year.

But last year, as protesters took to the streets nightly to demand racial justice and reform, the City Council and mayor voted to cut $15 million from the police budget, effectively halting the program.

“We often hear that body cameras will provide police accountability, but I disagree. I believe they are an expensive, false solution," Commissioner Jo Ann Hardesty, the first Black woman to serve on Portland’s City Council, said in June.

Hardesty said if officers do get body cameras, the money for them should come from the existing police budget. In addition, she wants to make sure a new police oversight board has access to all footage and that officers are required to record all law enforcement interactions.

“It has taken filming the police as journalists (and) civilians to reveal the everyday life of interacting with the police while being Black,” Hardesty said. “Even that hasn’t led to substantial change in policy or behavior. That’s why it’s important to keep our eye on reinvesting in community.”

Cline is a corps member for The Associated Press/Report for America Statehouse News Initiative. Report for America is a nonprofit national service program that places journalists in local newsrooms to report on undercovered issues.