Vancouver Whitecaps coach Marc Dos Santos looks forward to the day when he can focus solely on the soccer.

Dos Santos' attention must often turn to other logistics these days — even seemingly miniscule details like who takes care of players' pets — while the team is based in Utah because of the coronavirus pandemic. Ensuring the emotional wellbeing of his players and their families has become a priority.

Like Major League Soccer's other Canadian teams, the Whitecaps have been hampered by travel restrictions between the United States and Canada. Last season after the MLS is Back Tournament in Florida, Vancouver set up shop in Portland, Oregon, and played “home” games at Providence Park. 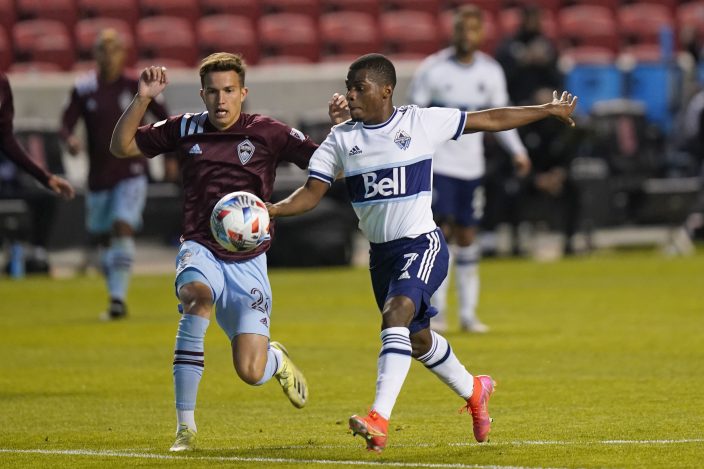 This season started for the Whitecaps in Sandy, Utah, home of Real Salt Lake. It's not known how long they will have to stay.

“What I’m more concerned with -- and I was never concerned really before when we went to Portland or Orlando, it was something of a month and a half or a month -- but now what we’re going to have to pay a lot of attention to things like mental health, mental health of the families that stay here, the families that cannot go to Salt Lake, the distance," Dos Santos said. "All of this, when I prepared myself to be a coach, I never thought I would have to deal with.”

The Whitecaps' travel party in Utah consists of 30 players, four coaches, 21 staff members, which includes everything from executives to video analysts, 30 family members, five dogs and a cat. 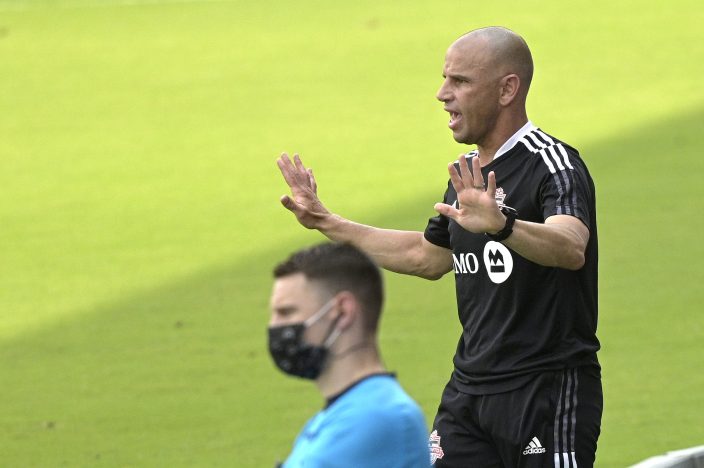 Toronto FC, with new coach Chris Armas, is based at an Orlando, Florida, resort and plays at Exploria Stadium. The Reds played home games in Connecticut last fall when the league returned to local markets. Montreal, meanwhile, is based in Fort Lauderdale.

For the Reds and Montreal, training in Florida means dealing with more heat than some of the players are accustomed to, as well as the occasional unwanted visitor — like the massive alligator that invaded a Toronto training session.

But there's a more serious aspect as well: staying safe in a pandemic. The Reds invited families to join the players in mid-April when COVID-19 cases suddenly spiked in Toronto. 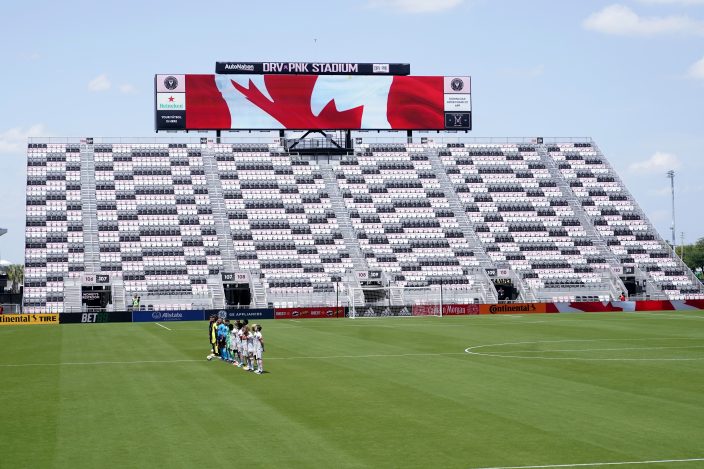 CF Montreal and Toronto FC players stand for the national anthem in a nearly empty DRV PNK Stadium during the first half of an MLS soccer match, Saturday, April 17, 2021, in Fort Lauderdale, Fla. CF Montreal is playing the first part of their season in Inter Miami's stadium due to the coronavirus pandemic. (AP PhotoLynne Sladky)

“They weren't planning to come down originally and then as things changed in Toronto, we decided it makes the most sense for them to just be down here, and then I can be around to help them out a little bit,” defender Justin Morrow said.

The foundation of the Seattle Sounders' impressive start to the season can be found in their formation. 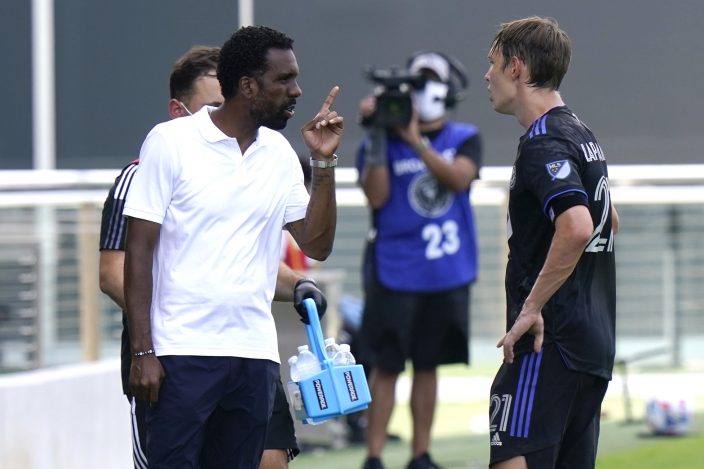 CF Montreal head coach Wilfried Nancy, left, talks with midfielder Lassi Lappalainen during the second half of an MLS soccer match against Columbus Crew, Saturday, May 1, 2021, in Fort Lauderdale, Fla. The game ended in a 0-0 tie. (AP PhotoLynne Sladky)

Technically, the new formation would be considered a 3-4-1-2 with three defenders, four midfielders, one attacking midfielder and two forwards. It’s a stark departure from the past when Seattle played with four defenders and only one forward at the top of the attack.

The new look has allowed wingers Brad Smith and Alex Roldan to be more involved in the attack, and Raul Ruidíaz seems to be enjoying having Will Bruin to work with up top. Ruidíaz is second in the league with four goals in three games.

Seattle’s eight goals are tied for most in the league through three games. Even more impressive, Seattle is one of two teams -- along with Orlando City -- that has allowed just one goal through the first three games.

“What I like is, how are teams supposed to plan for Raul and Will? How teams will plan for our two wing backs inside the penalty box,” coach Brian Schmetzer said. “We pose problems for teams in the attacking half based on, again, the tactics and our personnel.”

While the Sacramento Republic awaits more clarity about its MLS expansion future, the USL version of the club is partnering on a unique new naming rights deal for its home stadium.

Sacramento’s stadium will be known as Heart Health Park for the upcoming season through a partnership with Western Health Advantage, a nonprofit HMO health plan based in Sacramento. It’s believed to be the first sports venue to be named specifically to draw attention to a health concern.

Along with the name, the team intends to open the stadium for workouts with local fitness instructors, incorporate CPR certification into its youth soccer programming, and engage with regional nonprofits to create additional programing at the stadium with an emphasis on active lifestyles and nutrition.

"Our mission to make Sacramento an incredible place to live, work and play includes prioritizing the health of our family, friends and neighbors,” Republic owner and CEO Kevin Nagle said.

The 11,000-seat venue at Cal Expo was previously known as Papa Murphy’s Park.

Sacramento’s plans for an expansion MLS franchise took a major hit earlier this year when lead investor Ron Burkle backed out of the project. The team has been having advanced discussions with others interested in stepping in as lead investors.

Sacramento was originally scheduled to join MLS in 2023 as the league’s 30th team.

There are a number of good MLS rivalry games this weekend but Saturday night's El Trafico between the LA Galaxy and LAFC stands out because of the hot start by Javier Hernández, better known as Chicharito. The game will be nationally televised on FOX.