A U.S. Capitol Police officer traveled thousands of miles to Homer, Alaska, for an FBI raid on a woman's home, looking for something stolen during the Jan. 6 insurrection and the person who took it.

“We're looking for Nancy Pelosi's laptop," the agents told Marilyn Hueper after briefly handcuffing her. Hueper shot back: “That still doesn’t explain why you’re in my home. Or in Homer, Alaska.”

They would walk out with iPads, cellphones and a pocket-sized copy of the Declaration of Independence. They took a laptop, but it wasn’t from the House speaker’s office. And it’s possible they may have the wrong person — even though Hueper looks strikingly similar to the thief. 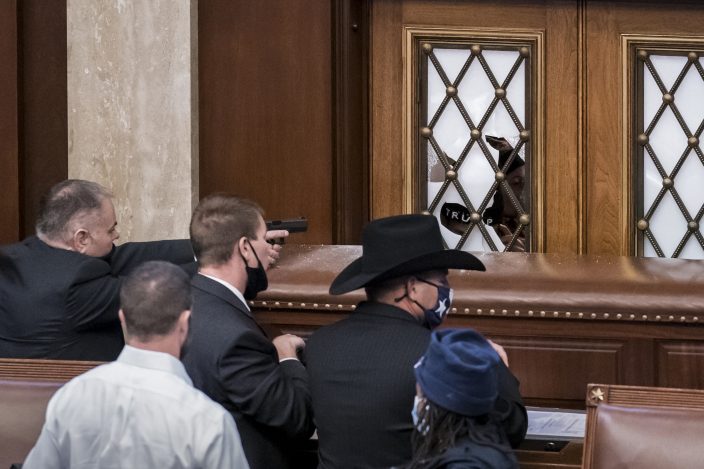 FILE - In this Jan. 6, 2021 file photo, security agents and lawmakers barricade the door to the House chamber as violent mob loyal to President Donald Trump breached the Capitol in Washington. The volume of people inside the Capitol building, along with the lack of arrests made at the time of the riot, has made it difficult to identify people, even with the glut of social media evidence. Federal agents have dug through thousands of social media posts, used sweeping warrants to obtain information on cellphones in the area of the Capitol, facial recognition tools and logs of devices that logged into the congressional WiFi during the riot to try to identify the hundreds of people who stormed the Capitol. (AP PhotoJ. Scott Applewhite)

The Justice Department's massive prosecution of those who stormed the U.S. Capitol on Jan. 6 has not been without its problems, including this potential instance of mistaken identity. And as Republicans are increasingly seeking to minimize the insurrection and play down the horror of the day, any missteps by federal prosecutors could be used in that effort to discredit what actually happened.

Federal prosecutors have charged more than 400 people, the largest undertaking by the department, including scores of defendants who posted images of their crimes online and boasted about breaking into the hallowed building. Some are facing serious charges and considerable prison time.

Hueper and her husband first came to officials' attention this year when Alaska Airlines in February banned the couple for refusing to wear masks on a flight, according to court documents obtained by The Associated Press. Then two other people called in tips saying they recognized Hueper in photos that authorities had released of suspects wanted for storming the Capitol. 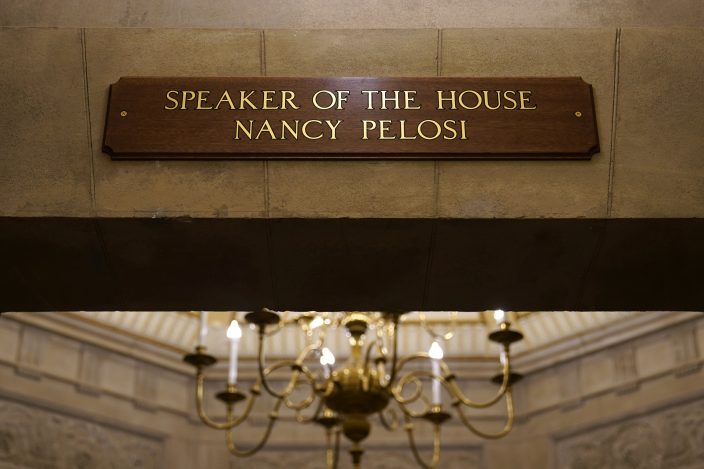 FILE - In this Jan.18, 2021 file photo, a view of the new sign marking the office for House Speaker Nancy Pelosi of Calif., from inside the U.S. Capitol in Washington. The new sign replaces the one that was destroyed when rioters stormed the Capitol. The Justice Department's massive prosecution of those who stormed the U.S. Capitol on Jan. 6 has not been without its problems, including a potential instance of mistaken identity. (AP PhotoSusan Walsh)

The insurrectionists sought to disrupt the certification of President Joe Biden’s victory. Hundreds of officers were injured and five people died after the riot, including a Capitol Police officer.

Supporters of then-President Donald Trump ransacked offices, rifled through lawmakers' papers and desks, smashed through glass, shattered windows and tore down signs. Among the items stolen: the laptop from Pelosi's office, her lectern, an iPad belonging to Majority Whip Rep. Jim Clyburn and other electronics.

But the volume of people inside the Capitol building, along with the lack of arrests made at the time of the riot, has made it difficult to identify people, even with the glut of social media evidence. Federal agents have dug through thousands of social media posts, gotten sweeping warrants to obtain information on cellphones in the area of the Capitol, used facial recognition tools and obtained logs of devices that signed into the congressional Wi-Fi during the riot.

But by far the most effective tool for federal agents has been old-fashioned tips. Many of the rioters have been ratted out by their friends and family members.

The warrant, obtained by the AP, identifies Hueper as the woman who took the laptop.

But they're wrong, Hueper insists. She told the AP that another woman wearing her same coat and with a similar hairstyle was inside the Capitol during the insurrection, not her. She admits she was in Washington, D.C., for Trump’s rally that day but says she didn’t get any closer than 100 yards (91 meters) from the Capitol and spent part of the day being lost in an unfamiliar city.

She said agents showed her one photo of the woman inside the Capitol, and they looked so similar that Hueper wondered if someone had used photo-editing software to put her in the photograph.

The warrant details how FBI agents located an image showing Hueper wearing similar clothing in a photo on her husband’s Instagram account. It said Hueper’s husband had also posted photos of them near the Capitol. “BEST OF 2020,” he wrote in one, showing her from behind nearing the building. “Marilyn approaching the Capital. As Patriots, there is a righteous revolution to take back our country ... To be there was a once-in-a-lifetime experience. STOP THE STEAL!”

Hueper said an agent came back with a different and larger photo of the woman, which showed the suspected thief wearing a black sweater with large white snowflakes on it. The agent asked where in the house they could locate the sweater.

Hueper said she reiterated she wasn't inside the building. “No. 2, why didn’t you show me this photo to start with? Because we can both obviously see here this is a different person.”

Plus, she said, the sweater was hideous.

Both women were wearing black Columbia down coats. However, in a photo posted on her husband’s Facebook page from Jan. 6, Hueper is shown wearing a black face mask, a green blouse open at the collar and a light green scarf. The surveillance video released by the FBI shows the sought-after woman wearing the black sweater with a snowflake print and dangling earrings. Also, the woman in the photo has detached earlobes, while Hueper says hers are attached.

After insisting, Hueper was shown the front page of the warrant but not allowed to thoroughly read the document, she said. She read it only after receiving a copy as the dozen or so agents and Capitol Police officer left.

According to the search warrants, agents could collect any electronics that might be suspected to have been involved, items stolen from the Capitol, a laptop with descriptors and a serial number — “which they didn’t find,” she said — and any paperwork related to planning violence.

Hueper said she has not heard back from federal authorities, nor have agents returned her laptop, two iPads, two cellphones or the 50-cent pocket-sized Declaration of Independence booklet they confiscated April 28.

She has not been arrested. Justice Department officials would say only that the investigation is ongoing.

But she decided to go public with her story, just in case.

“I better go online and protect myself before they call me in and make me this person,” she said.