NASCAR's next generation race car is finally here after two years of hype and hope that it will revolutionize the stock car series.

How can a spec car radically change a sport? 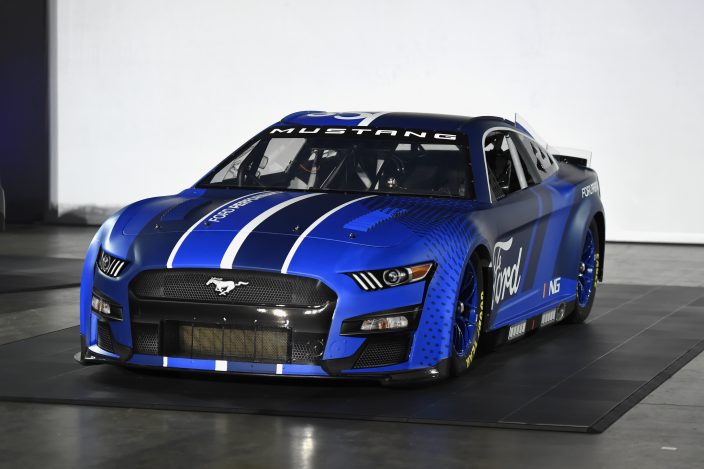 The 2022 Next Gen Ford Mustang Cup car was unveiled during a NASCAR media event in Charlotte, N.C., Wednesday, May 5, 2021. (AP PhotoMike McCarn)

The Next Gen car, first proposed in 2018 and originally set to debut this season until the pandemic delayed it until 2022, is a first-of-its-kind collaboration between NASCAR and its partners. All parties had to work toward creating a car that served the entire industry.

“We really wanted to get back to a promise that we had made to the fans, which is to put the ‘stock’ back in stock car,” said NASCAR President Steve Phelps. “It looks like you’ve gone to some type of outfit that’s taken a regular car and just made it look incredibly sporty. There’s a relevance to this race car that we haven’t seen, frankly, in 40, 50 years.” 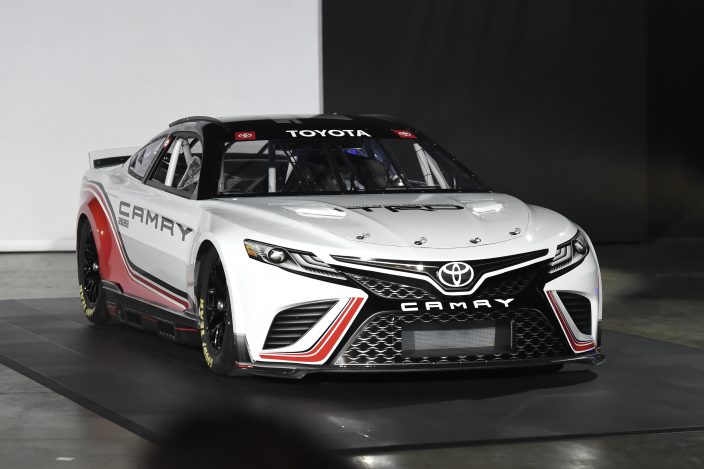 The 2022 Next Gen Toyota Camry Cup car was unveiled during a NASCAR media event in Charlotte, N.C., Wednesday, May 5, 2021. (AP PhotoMike McCarn)

It was the first public look at the most significant change to the Cup cars since the present “Car of Tomorrow” model was introduced in 2007.

For the first time in NASCAR's 73-year history, single-source manufacturers will build the chassis, provide parts and supply the carbon composite body. But each individual manufacturer has the flexibility to design the shell to at last resemble the Camaros, Mustangs and Camrys anybody can drive off the car lot.

“Chevrolet wants to have a competitive car on track. But equally as much, we want to have a car that aligns itself with something somebody can go buy on a showroom floor,” Elliott said. “I think they did a really good job of marrying those two things together.” 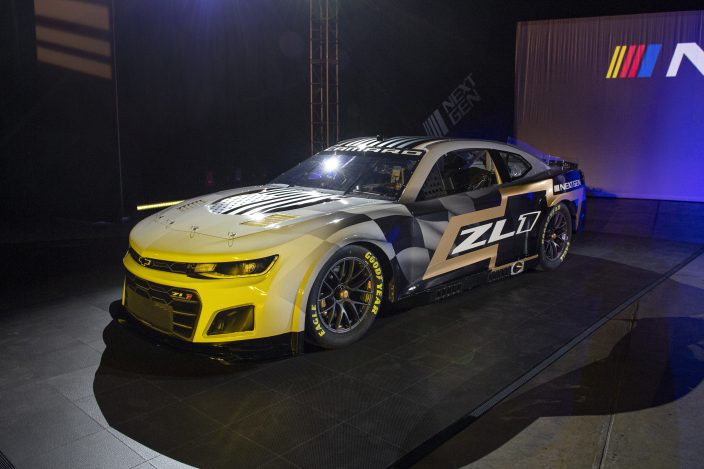 The 2022 Next Gen Chevrolet Camero Cup car was unveiled during a NASCAR media event in Charlotte, N.C., Wednesday, May 5, 2021. (AP PhotoMike McCarn)

The Next Gen also led NASCAR to modern upgrades found on today's street cars — rack-and-pinion steering, independent rear suspension, bigger wheels and upgraded connectivity to allow for an in-car camera in every vehicle. There is also the ability to adapt as technology changes.

NASCAR has had only three manufacturers since Dodge left the sport after the 2012 season, and Phelps has said new carmakers would not be interested in joining until a new look was introduced.

The Next Gen should make NASCAR appealing to other manufacturers particularly as hybrid technology is explored. The new car, for now, will continue to use internal combustion, pushrod V8 engines produced by each of the three manufacturers. 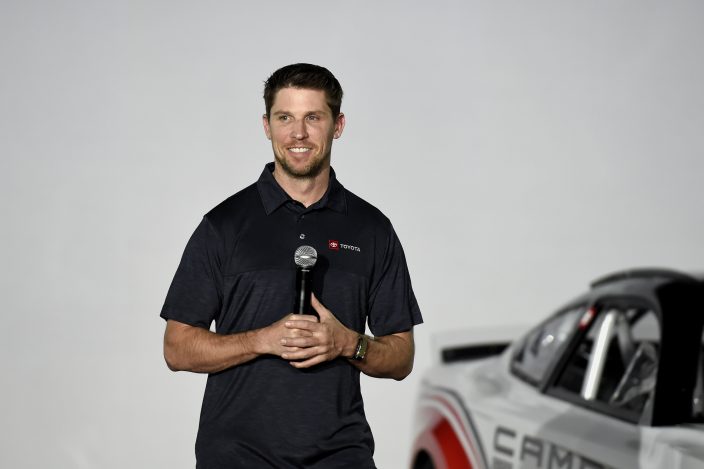 Driver Denny Hamlin talks about Toyota Camry Next Gen Cup car that will be used in the 2022 season during the NASCAR media event in Charlotte, N.C., Wednesday, May 5, 2021. (AP PhotoMike McCarn)

“We are future-proofing the car to enable hybrid," said Mark Rushbrook, global director at Ford Performance Motorsports. "We think that is important as our road car cycles changes to be able to race hybrid in this car as well.”

The car is expected to dramatically contain costs in large part because of its single supplier chains, and teams will be limited to seven cars at a given time instead of an unlimited fleet, making ownership appealing for the first time in years. 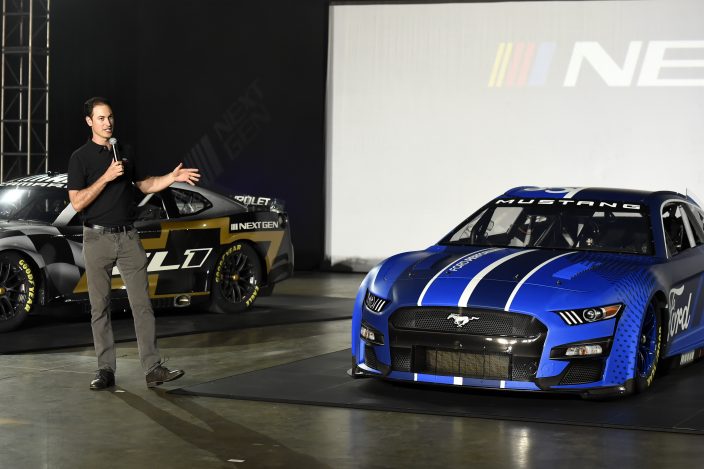 Driver, Joey Lagano talks about the Next Gen Mustang Cup car that will be used starting in the 2022 season during the NASCAR media event in Charlotte, N.C., Wednesday, May 5, 2021. (AP PhotoMike McCarn)

It all led to a bidding war last summer on the charters that guarantee entry for 36 cars into the 40-car NASCAR Cup field each week. Marks could not get one and currently leases a charter for Trackhouse Racing; he will try again to purchase a charter for next season, but he potentially could be bidding against other owners, including Hamlin and Jordan, who might want to expand 23XI Racing to two cars next season.

“It’s an attractive time to come into the sport. This was a big factor in our decisions, will be part of our decisions going forward,” Hamlin said. “We have a reset in technology and resources that are going into this car. We’re not at a 20- to 30-year disadvantage by coming into the sport. We’ll all be developing it at the same time in its early existence.”

The biggest test of the Next Gen will come on the track. 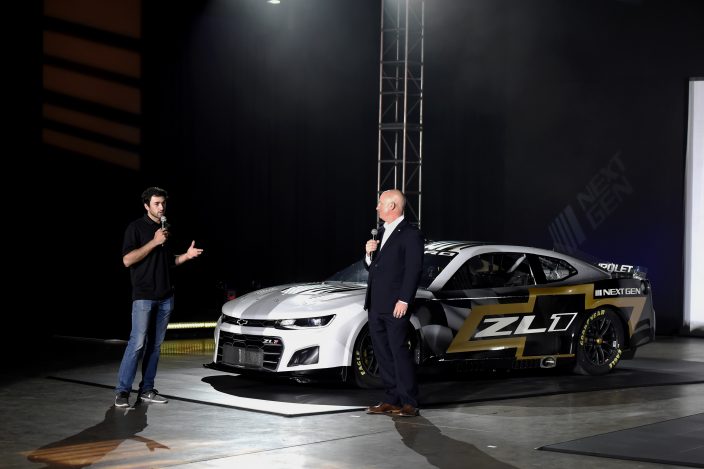 Driver Chase Elliott and Eric Warren, Director, NASCAR Programs with General Motors talk about the Next Gen Camaro that will be used in the 2022 season during the NASCAR media event in Charlotte, N.C., Wednesday, May 5, 2021. (AP PhotoMike McCarn)

NASCAR has said the car will improve competition and that will be where the car will ultimately be judged. Although the Cup Series has 10 winners through 11 races so far this season, a handful of teams and drivers typically dominate the top series.

Kevin Harvick and Hamlin combined to win 16 of 36 races last year before Chase Elliott snatched the title for Hendrick Motorsports; Joe Gibbs Racing won 19 races and the championship in 2019.

The Next Gen, though, is designed to give drivers greater control and put an emphasis back on race strategy, team personnel and vehicle setup. The symmetric body shape significantly reduces side-force, which in theory should make the cars harder to drive through corners — NASCAR's current car is offset, not symmetric.

The composite body is designed to minimize in-race damage that would otherwise affect handling and lead to further incidents that could alter a race. And the new, wider tires are designed to allow Goodyear to bring a softer compound to improve passing and strategy options.

“So many new challenges, us not knowing what’s coming next, what is the next corner going to be like, what is it going to be like when we race each other on a speedway, a short track, a dirt track,” Logano said. “We have a lot of unknowns of how we race each other, how we set up the cars, as we all try to evolve so quickly to become the first winners in this car and try to win the championship next year — it’s going to be a blast.”