Mark Melancon pitched the ninth for his big league-leading 11th save in 11 chances. Craig Stammen (2-1) got the final out of the sixth for the win in relief of Yu Darvish.

Cronenworth's go-ahead hit came a half inning after Darvish surrendered a two-run lead and was chased with the score tied at 2. Darvish didn't factor in the decision but struck out eight in 5 2/3 innings while allowing six hits and one walk. 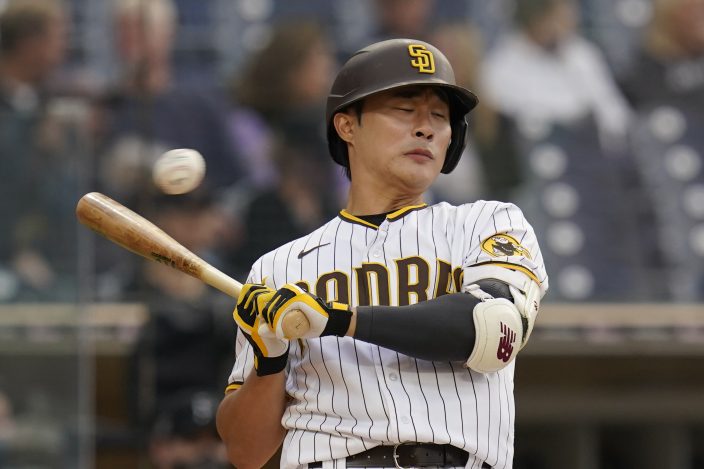 San Diego Padres' Ha-Seong Kim moves back from an inside pitch while batting during the fourth inning of the team's baseball game against the Pittsburgh Pirates, Wednesday, May 5, 2021, in San Diego. (AP PhotoGregory Bull)

After Tommy Pham struck out for the third straight time, Cronenworth singled to right to give the Padres the lead.

Darvish lost his lead in the span of five batters in the sixth. Bryan Reynolds hit a leadoff home run to left, his his third. After Darvish allowed consecutive singles followed by a strikeout, Ka'ai Tom hit a sacrifice fly to tie it. Darvish hit rookie Hunter Owen with a pitch and was lifted for Stammen (2-1). 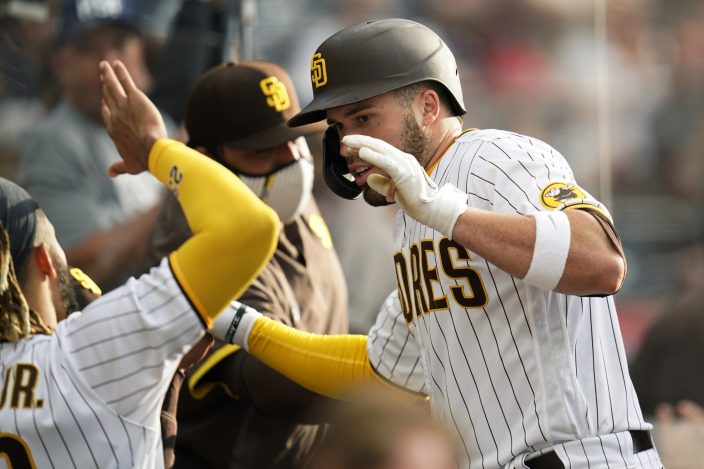 San Diego Padres' Victor Caratini, right, is greeted by teammates in the dugout after hitting a home run during the third inning of a baseball game against the Pittsburgh Pirates, Wednesday, May 5, 2021, in San Diego. (AP PhotoGregory Bull)

Kevin Newman, who grew up in suburban Poway, hit an inning-ending groundout.

Darvish had struck out the side in the fifth. He was coming off an excellent outing against San Francisco in which he struck out 12 and allowed one run and four hits in 6 1/3 innings.

Caratini hit a leadoff homer in the third off JT Brubaker, his second. Brubaker allowed three straight Padres to reach with one out in the fifth, with Fernando Tatis Jr. scoring on Wil Myers’ single. 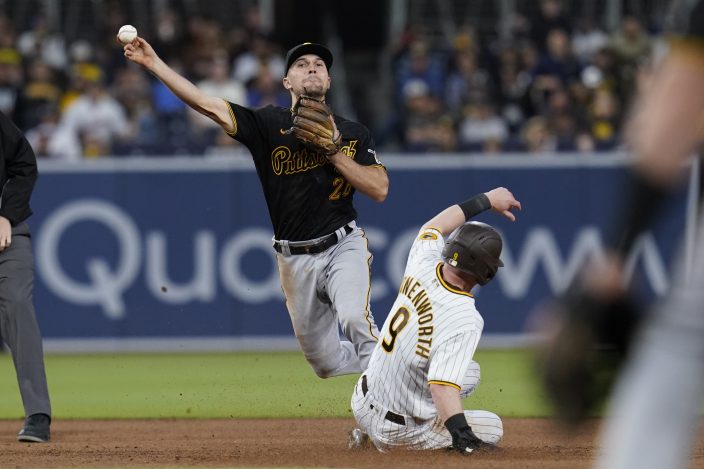 Pittsburgh Pirates second baseman Adam Frazier throws to first to complete the double play as San Diego Padres' Jake Cronenworth slides at second during the sixth inning of a baseball game Wednesday, May 5, 2021, in San Diego. Fernando Tatis Jr. was out at first. (AP PhotoGregory Bull)

Brubaker allowed two runs and six hits in five innings, struck out seven and walked one.

Padres: Manager Jayce Tingler said RHP Dinelson Lamet and LHP Ryan Weathers were feeling well after their outings in a 2-1 loss Tuesday night. Lamet, who had been on the injured list with right forearm inflammation, started and went two innings and Weathers, who came out of his previous outing with a sore left arm, went three innings. Tingler says the next steps for each pitcher are to be determined. 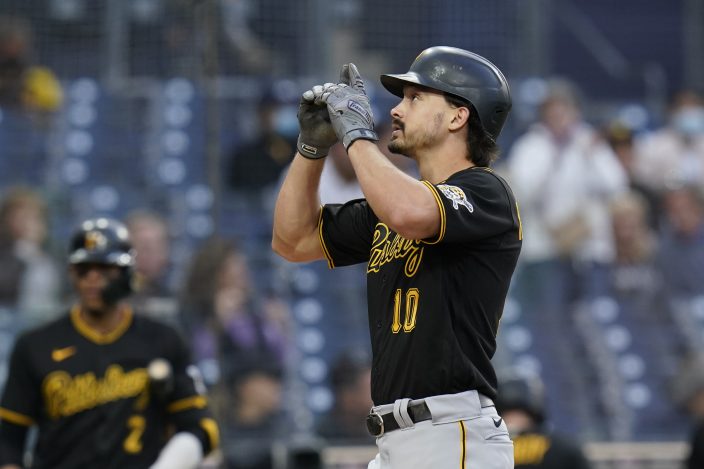 Pittsburgh Pirates' Bryan Reynolds gestures after hitting a home run during the sixth inning of the team's baseball game against the San Diego Padres, Wednesday, May 5, 2021, in San Diego. (AP PhotoGregory Bull)

Padres: LHP Blake Snell (1-0, 3.51) is scheduled to start Friday night in the opener of a three-game series at San Francisco, which will counter with RHP Anthony DeSclafani (2-1, 2.00). 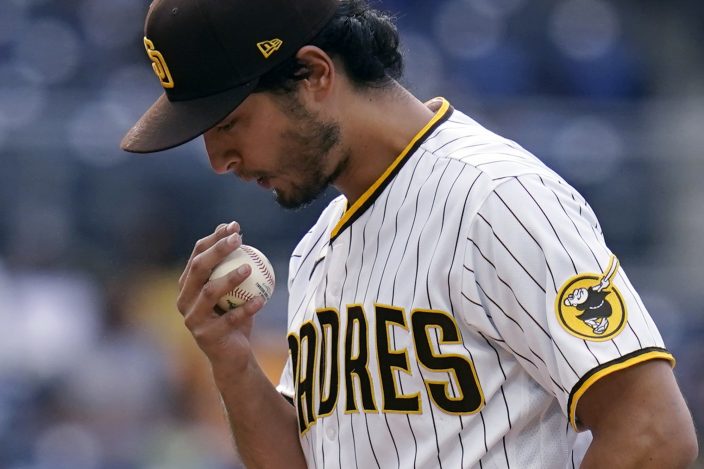 San Diego Padres starting pitcher Yu Darvish blows on his hand while warming up during the third inning of the team's baseball game against the Pittsburgh Pirates Wednesday, May 5, 2021, in San Diego. (AP PhotoGregory Bull)