If it seemed New York Yankees fans eased up on the Houston Astros just a bit Wednesday night, Giancarlo Stanton most certainly did not.

Stanton homered again and knocked in four runs, Aaron Hicks hit a tiebreaking single in the eighth inning and the Yankees beat Houston 6-3 for their fifth straight victory.

With fans in the Bronx chanting curses at José Altuve and several other Astros for the second consecutive night, the Yankees (16-14) got three innings of scoreless relief from their major league-best bullpen and won their 10th in 13 games to move two games above .500 for the first time this year. 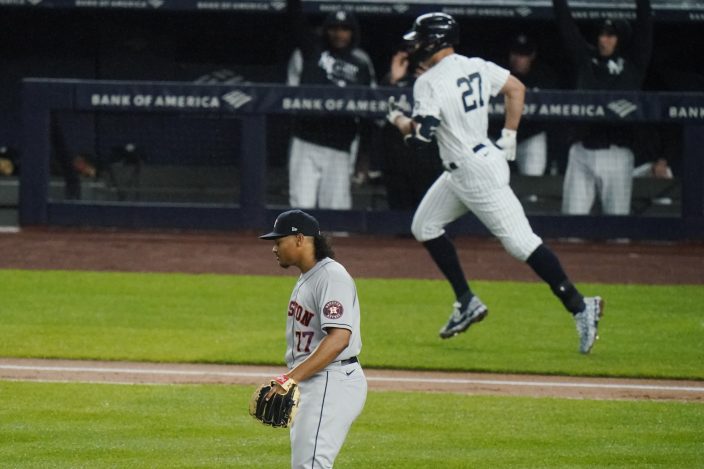 New York will try for a three-game sweep Thursday afternoon, with ace Gerrit Cole facing Houston for the first time since leaving the Astros for a $324 million, nine-year contract with the Yankees before the 2020 season.

Yuli Gurriel and Aledmys Díaz had back-to-back RBI doubles against Jordan Montgomery in a three-run fourth that gave Houston a 3-2 lead, but the Yankees cut down Carlos Correa at the plate with a well-executed relay on Gurriel's drive off the left-field fence. 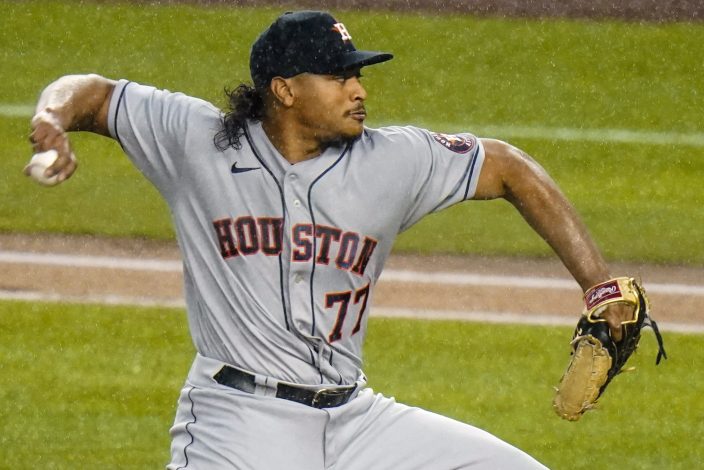 Houston Astros' Luis Garcia delivers a pitch during the first inning of a baseball game against the New York Yankees Wednesday, May 5, 2021, in New York. (AP PhotoFrank Franklin II)

New York then rallied with two outs and none on in the fifth, and Stanton tied it when he greeted Ryne Stanek with an RBI double.

“It’s definitely nice to have him rolling,” Hicks said.

The big slugger launched a long homer off rookie starter Luis Garcia in the third, extending his hitting streak to 11 games with his second two-run shot in two nights against the rival Astros. 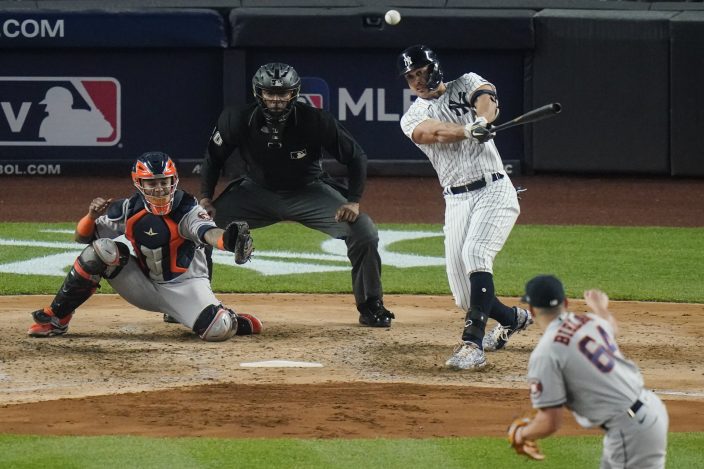 New York Yankees' Giancarlo Stanton follows through on a double during the fifth inning of a baseball game against the Houston Astros Tuesday, May 4, 2021, in New York. The Yankees won 7-3. (AP PhotoFrank Franklin II)

“It’s been great to see him. He’s a special person and talent," Yankees manager Aaron Boone said. “I feel like this has been coming.” 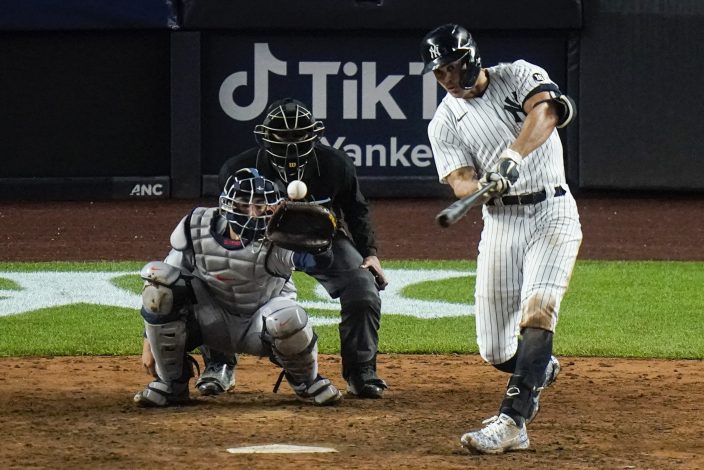 New York Yankees' Giancarlo Stanton hits an RBI single during the eighth inning of a baseball game against the Houston Astros Wednesday, May 5, 2021, in New York. The Yankees won 6-3. (AP PhotoFrank Franklin II)

This is Houston's first visit to Yankee Stadium since the team's illegal sign-stealing scam, employed from 2017-18 according to a Major League Baseball investigation, was exposed after the 2019 season.

A crowd of 9,895 limited by the pandemic called Alex Bregman and other Astros cheaters throughout the night, but the venom and vitriol seemed to be dialed down a bit from the series opener Tuesday. 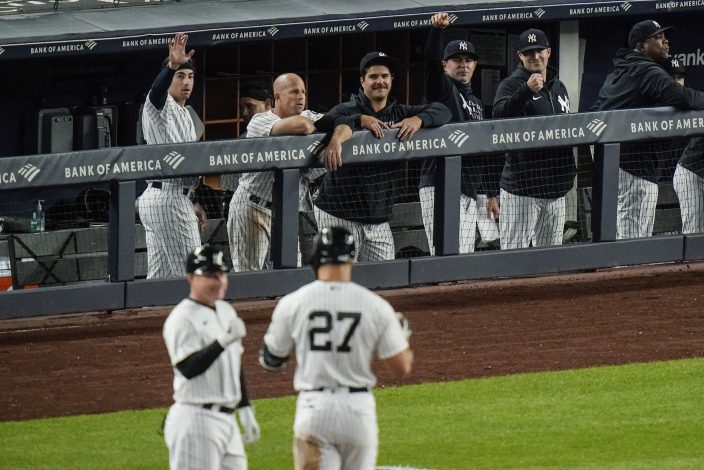 New York Yankees players gesture to Giancarlo Stanton (27) after stanton drove in a run with a single during the eighth inning of a baseball game against the Houston Astros Wednesday, May 5, 2021, in New York. The Yankees won 6-3. (AP PhotoFrank Franklin II)

With the score tied 3-all, Gleyber Torres opened the eighth with a single off Brooks Raley (0-2). Pinch-hitter Clint Frazier walked and the slumping Hicks poked a flare inside the right-field line to put the Yankees ahead.

Brett Gardner hit a sacrifice fly later in the inning, and Stanton added an RBI single.

“He’s on a tear right now," said Montgomery, who gave up three runs and eight hits in six innings. “Definitely a force to be reckoned with.” 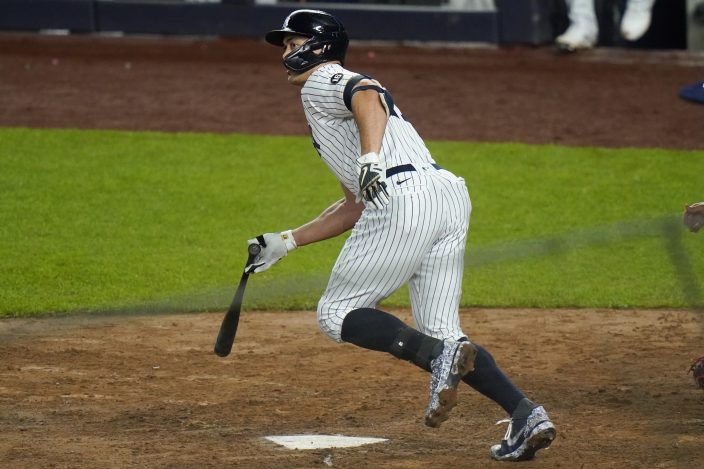 New York Yankees' Giancarlo Stanton hits an RBI double during the fifth inning of a baseball game against the Houston Astros Wednesday, May 5, 2021, in New York. (AP PhotoFrank Franklin II)

Jonathan Loaisiga (3-1) pitched a hitless eighth and Aroldis Chapman struck out two in a 1-2-3 ninth to stay perfect in seven save chances.

Rain was falling when the game began, but play never stopped and the skies eventually cleared. 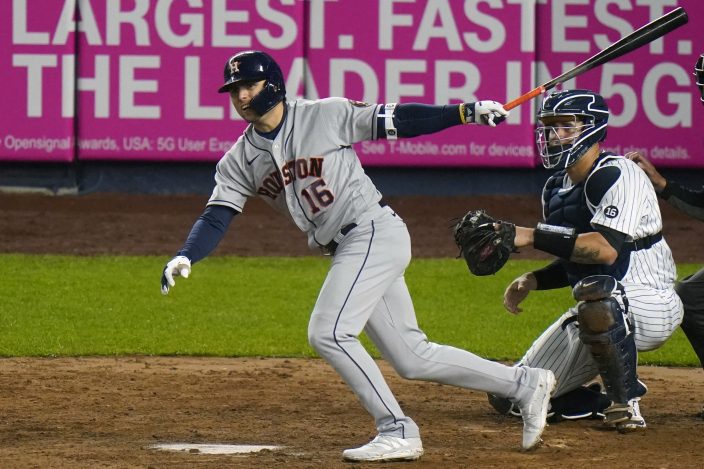 Houston Astros' Aledmys Diaz (16) follows through on a RBI double during the fourth inning of a baseball game Wednesday, May 5, 2021, in New York. (AP PhotoFrank Franklin II)

Chapman stared in toward the plate, as he often does to punctuate a save, and then broke into a smile after whiffing Gurriel for the final out. It was the closer's first outing against Houston since serving up a series-winning homer to Altuve in the 2019 ALCS.

Chapman has gotten 33 outs this season — 26 on strikeouts. The fireballing lefty has permitted just two hits and three walks in 11 shutout innings.

“He’s really dialed in right now. Spotting up 101 (mph) on the black. Got a splitter and a slider now that are both disgusting," Montgomery said. “Definitely makes a lot of sense why he’s striking everybody out.”

SWING AND A MISS

New York won even though No. 3 hitter Aaron Judge fanned all five times up, standing six runners. The five strikeouts matched a career worst set at Detroit on June 4, 2018.

Astros: C Martín Maldonado sat out with a bruised left trapezius and is day to day. He told manager Dusty Baker he would be available in an emergency. Maldonado was banged up Tuesday night when Rougned Odor's knee slammed into his head and shoulder in a nasty-looking home plate collision. “He’s a little sore,” Baker said. "He’s doing pretty good, I mean, considering the force of that collision.” ... RHP Enoli Paredes, on the injured list with right side soreness, was set to begin a rehab assignment at Double-A Corpus Christi. ... RHP Jake Odorizzi (right pronator muscle strain) was scheduled to throw a bullpen — in an indoor cage if necessitated by rain. He'll need at least a couple of rehab outings before returning, Baker said.

Yankees: Odor was placed on the 10-day injured list with a sprained left knee and the team recalled RHP Albert Abreu from Triple-A Scranton/Wilkes-Barre. DJ LeMahieu replaced Odor at second base, and Mike Ford started at first. ... Luke Voit (left knee surgery) went 2 for 3 with a two-run homer while batting leadoff in his second rehab game with Scranton, a 7-5 victory at Syracuse. He was scheduled to play five innings at first base. Last year's major league home run champ hopes to join the big league club next week. ... Also for Scranton, RHP Adam Warren struck out three in 1 1/3 scoreless innings, his first appearance since Tommy John surgery in September 2019.

“You like to go up against the best, right?'' McCullers said, adding the two haven't really chatted lately in the lead-up. ”So, I’m looking forward to it.”