VIRUS OUTBREAK-VACCINES — The Biden administration throws its support behind efforts to waive intellectual property protections for COVID-19 vaccines as a way to speed the end of the pandemic. The announcement comes amid World Trade Organization talks over easing global trade rules to enable more countries to produce more of the life-saving vaccines. By Jamey Keaten and Zeke Miller. SENT: 720 words, photos.

President Joe Biden takes questions from reporters as he speaks about the American Rescue Plan, in the State Dining Room of the White House, Wednesday, May 5, 2021, in Washington. (AP PhotoEvan Vucci)

VIRUS-OUTBREAK-INDIA-DIASPORA — India’s large diaspora — long a boon to India’s economy — is tapping its wealth, political clout and expertise to help its home country combat the catastrophic coronavirus surge that has left people to die outside overwhelmed hospitals. Around the world, people of Indian descent are donating money, personally delivering desperately needed oxygen equipment and setting up telehealth consultations and information sessions in hopes of beating back the outbreak. By Sudhin Thanawala. SENT: 1,080 words, photos.

CHINA-XINJIANG-RAMADAN — Under the weight of official policies, the future of Islam appears precarious in Xinjiang, a remote region facing Central Asia in China’s northwest corner. Outside observers say scores of mosques have been demolished, which Beijing denies, and locals say the number of worshippers is declining. By Ken Moritsugu and Dake Kang. SENT: 1,220 words, photos. 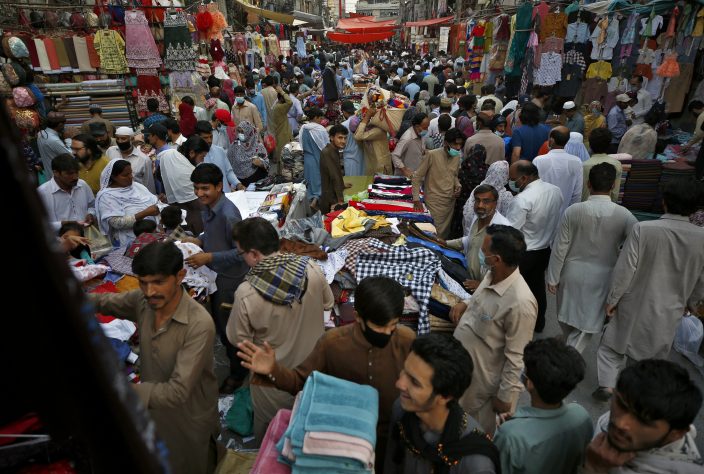 People ignore social distancing and many do not wear face masks as they shop for the upcoming Eid al-Fitr holiday that marks the end of the Muslim holy fasting month of Ramadan after the government announced new restrictions, in Rawalpindi, Pakistan, Wednesday, May 5, 2021. Pakistani authorities plan to put in place a nine-day lockdown from May 8 to 16 prior to the holiday. New restrictions also include closure of all tourist resorts, beaches, hotels, restaurants, shopping centers, parks and other public places to try to control the spread of the coronavirus. (AP PhotoAnjum Naveed)

REPUBLICANS-PANDEMIC RELIEF — Every Republican in Congress voted against the $1.9 trillion “American Rescue Plan,” which President Joe Biden signed into law three months ago. But ever since, Republicans from New York and Indiana to Texas and Washington state have promoted elements of legislation that would not exist if they had their way. By National Political Writer Steve Peoples. SENT: 1,020 words, photo.

BIDEN — Biden visits Louisiana, which has been barraged by 30 extreme weather events over the past decade that caused $50 billion worth of damage — making it ground zero for his infrastructure push to protect against storms, winds and flooding. By Josh Boak. UPCOMING: 620 words, photos by 5:30 a.m.; 900 words after 1:25 p.m. speech.

VIRUS OUTBREAK-SCHOOLS — Biden meets his goal of having most elementary and middle schools open for full, in-person learning in his first 100 days. By Education Writer Collin Binkley. SENT: 860 words, photo.

VIRUS-OUTBREAK-DUBAI-LUXURY-BOOM — Foreign buyers flush with cash have flooded the high-end property market in Dubai even as vaccines roll out unevenly across the world and waves of infections force countries to extend restrictions. SENT: 980 words, photos.

VIRUS-OUTBREAK-SOCIAL-MEDIA-MEMORIES — Memories from earlier in the COVID-19 crisis are popping back up in people’s social media feeds as throwback reminders, reposts and anniversary stories crack open the digital time capsule of the pandemic before it’s even over. SENT: 1,030 words, photos.

VIRUS-OUTBREAK-VIRAL-QUESTIONS-VACCINE-PERIODS — It’s not yet known if COVID-19 vaccines can affect your period, but researchers are starting to study the issue. SENT: 290 words, graphic.

VIRUS-OUTBREAK-ASIA — The military and police in the Pacific nation of Fiji have surrounded and locked down a major hospital amid concerns of a growing virus outbreak. SENT: 660 words, photos. With VIRUS OUTBREAK-THE LATEST.

VIRUS-OUTBREAK-AUSTRALIA — Australia’s drastic COVID-19 strategies of preventing its citizens leaving the country and returning from India were challenged in court. SENT: 540 words, photo.

CONGRESS-DIVIDED REPUBLICANS — No. 3 House Republican Liz Cheney is clinging to her post as party leaders line up behind an heir apparent for her job. SENT: 1,100 words, photos.

CAPITOL BREACH-PELOSI’S LAPTOP — The Justice Department’s massive prosecution of those who stormed the U.S. Capitol on Jan. 6 has not been without its problems, including a potential instance of mistaken identity. SENT: 1,000 words, photos.

ARMY-CRIMINAL INVESTIGATIONS — U.S. officials say the Army plans to put a civilian in charge of the command that conducts criminal investigations, in response to widespread criticism that the unit is understaffed, overwhelmed and filled with inexperienced investigators. SENT: 650 words, photos.

THREE-FIFTHS COMPROMISE-EXPLAINER — Republican lawmakers have given new voice to a claim that the clause in the Constitution counting slaves as three-fifths of a person was a step toward ending slavery, but scholars say there is no evidence of that. SENT: 900 words, photo.

CALIFORNIA RECALL — Caitlyn Jenner, a Republican whose campaign for California governor has elicited angry reaction from some members of the LGBTQ community, says that “I move on” when it comes to her critics. By Political Writer Michael R. Blood. SENT: 1,090 words, photos.

JEFFREY-EPSTEIN-ASSOCIATE — Federal prosecutors say Ghislaine Maxwell is not under suicide watch, but it’s still necessary to flashlight into her cell every 15 minutes as she sleeps while she awaits a sex trafficking trial. SENT: 430 words, photo.

ITALY-POLICE SLAYING TRIAL — A jury in Italy convicted two American friends in the 2019 slaying in Rome of a police officer in a tragic unraveling of a small-time drug deal gone bad, sentencing them to the maximum life in prison. SENT: 1,080 words, photos.

UKRAINE-US — On the frontlines of the battle against Russia-backed separatists and in the halls of government in Kyiv, Ukrainians hold strong hopes for the visit of the U.S. secretary of state — increased military aid and strong support for NATO membership among them.

UNITED-NATIONS-FOOD-CRISES — At least 155 million people faced acute hunger in 2020, including 133,000 who needed urgent food to prevent widespread death from starvation — and the outlook for 2021 is equally grim or worse, a report by 16 organizations says. SENT: 640 words, photos.

KOREAS-PROPAGANDA-LEAFLETS — South Korean police raided the office of an activist who said he had floated hundreds of thousands of propaganda leaflets toward North Korea by balloon in defiance of a new, contentious law that bans such activities. SENT: 390 words, photos.

FINANCIAL-MARKETS — Asian shares were mostly higher on cautious optimism that upcoming company earnings reports will reflect a gradual recovery from the damage of the pandemic. By Business Writer Yuri Kageyama. SENT: 670 words, photos.

ITALY-BLACK-TV-SERIES — The Netflix series “Zero,” which premiered globally last month, is the first Italian TV production to feature a predominantly Black cast, a bright spot in an otherwise bleak Italian television landscape where the persistent use of racist language and imagery is sparking new protests. SENT: 1,070 words, photos.

ORIOLES-MEANS — The clubhouse celebration that awaited John Means was more than 50 years in the making for the Baltimore Orioles and more like a playoff berth being clinched rather than a Wednesday win in May. By Sports Writer Tim Booth. SENT: 700 words, photos.