U.S. Secretary of State Antony Blinken has downplayed any prospect of an imminent trade deal with a post-Brexit Britain.

In an interview with BBC radio broadcast Thursday, Blinken said any deal would take “some time” and that U.S. President Joe Biden wants to ensure any trade agreement would benefit American workers and their families.

“Our trade negotiator just got on the job, so she’s taking the time to go back and review everything that was discussed and that’s going to take some time,” said Blinken, who was in London in the early part of the week for the Group of Seven meeting of foreign ministers. 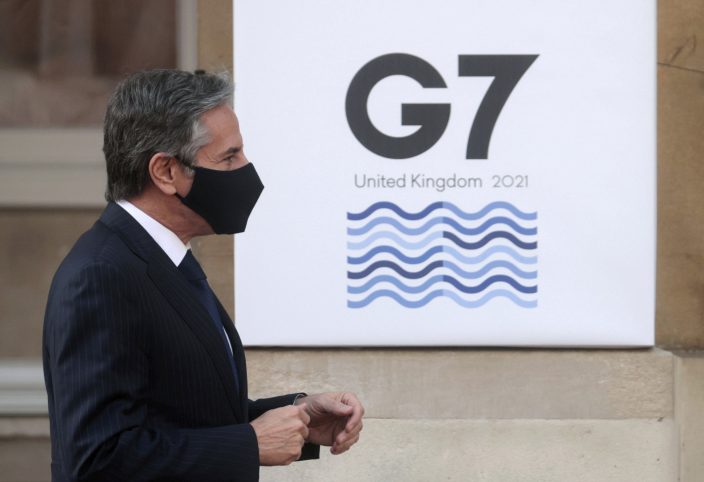 US Secretary of State, Antony Blinken, arrives for talks, during the G7 foreign ministers' meeting, at Lancaster House in London, Wednesday, May 5, 2021. Diplomats from the group of wealthy nations are meeting in London for their first face-to-face gathering in two years. (Hannah McKayPool Photo via AP)

“We want to make sure that, whether it’s with the United Kingdom or anyone else, any agreements reached are consistent with the principles that President Biden has established to focus on making sure that these agreements really advance the wellbeing of our workers and their families. That’s our focus.”

Blinken said the U.S.'s new trade negotiator, Katherine Tai, would be taking time to review the discussions that had taken place with the preceding administration of Donald Trump before progressing with the talks.

Trump had been a keen proponent of a trade deal with Britain, which formally left the economic orbit of the European Union at the start of this year. Now outside the EU, the U.K. can negotiate its own trade deals — previously, when within the bloc, the EU had negotiated trade deals on behalf of its members.

One of the main arguments of Brexit supporters in the runup to the referendum on Britain's membership of the EU in 2016 was the prospect of a swift trade deal with the U.S., the world's largest economy.

The EU and the U.S. do not have an overarching trade agreement but they do have a series of bilateral deals to ease trade, such as on aviation.

Though the U.S. is the world's largest economy, Britain's trade with the EU is far higher as a proportion of its annual GDP. That's why it was a priority for the government of Prime Minister Boris Johnson to negotiate an agreement that ensured that tariffs were not put up on trade between the U.K. and the EU. Though tariffs have been avoided, there are numerous non-tariff barriers, such as customs checks, that hinder trade and add costs to businesses.

The Brexit deal has caused particular consternation within Northern Ireland, especially among those who want the region to remain part of the U.K.

In his interview, Blinken stressed the importance the president, who has Irish roots, placed on ensuring the gains of the 1998 Good Friday Agreement, which brought peace to Northern Ireland.

“We want to make sure that, whether it’s with the United Kingdom or the EU, whether it’s anything we’re doing, that we make sure that the tremendous gains from the Good Friday Agreement are sustained and that the economic as well the political wellbeing of Northern Ireland is taken fully into account,” he said.

Follow all AP stories about Brexit and British politics at https://apnews.com/Brexit