Ireland captain Jonathan Sexton was the most high-profile omission from a 37-man British and Irish Lions squad that will tour South Africa in July and August, with coach Warren Gatland selecting an even spread of players from the four home unions.

Alun Wyn Jones was selected as tour captain for the first time, one of 10 players from Six Nations champion Wales. England had 11, a lower-than-anticipated contingent reflecting the team's struggles in the Six Nations but including Sam Simmonds — a No. 8 without a test cap since March 2018.

Eight Scots is the country's highest number since 1989 and there are also eight players from Ireland, though not its captain Sexton, a former world player of the year. 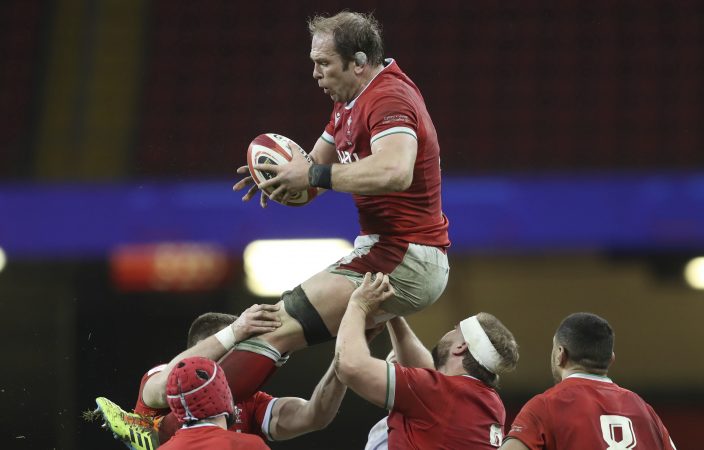 FILE - In this Saturday, Feb. 27, 2021 file photo, Wales' Alun Wyn Jones gathers the ball in a line out during the Six Nations rugby union match between Wales and England at the Millennium stadium in Cardiff, Wales. Wales great Alun Wyn Jones was selected on Thursday May 6, 2021, as captain of the British and Irish Lions for the first time for the tour of South Africa. (David DaviesPool via AP, File)

Gatland chose to call up Owen Farrell, Dan Biggar and Finn Russell as his flyhalves.

The 35-year-old Jones, who will tour with the Lions for the fourth straight time, was stand-in captain for the series-clinching victory over Australia in the third test in 2013 but has never been tour captain.

He is one of the most respected players in rugby and holds the world record for test appearances at 157, nine of which have come in the last three Lions series. He led Wales to the Six Nations title in March and has been captain of his country on a permanent basis since 2017.

The lock is the oldest player to captain the Lions in the professional era and is likely to form a second-row partnership with England’s Maro Itoje, who was also in the frame for the captaincy.

After a warm-up game against Japan at Murrayfield on June 26, the six-week Lions tour is scheduled to start in July and currently will feature five matches against South African domestic and development teams — involving travel to six different cities — before three tests against the world champion Springboks.

South Africa hasn’t played a game since winning the World Cup in November 2019 because of the pandemic, which put the tour under threat until last month.

South Africa has had more than 1.5 million reported cases of COVID-19 and more than 54,000 deaths. Its cases have been driven since late last year by a variant that experts says is more contagious.

Only 353,000 people out of a population of around 60 million have been vaccinated and they are health workers. Vaccines have not been rolled out for the general public.

It is still uncertain if fans will be allowed into games. SA Rugby has been trying to convince the South African government, with the hope to have 50% capacity in stadiums.