Zack Wheeler struck out eight and tossed a three-hit shutout and Alex Bohm homered to lead the Philadelphia Phillies to a 2-0 win and four-game sweep of the Milwaukee Brewers on Thursday.

The Phillies head out on a nine-game road trip in first place (17-15) and as the only team in the NL East with a winning record.

Wheeler threw his second career shutout and complete game in 144 starts and first since 2014 when he played for the New York Mets. Wheeler put two runners on in the ninth and retired Daniel Vogelbach on a foul pop on the 118th pitch to finish the shutout. 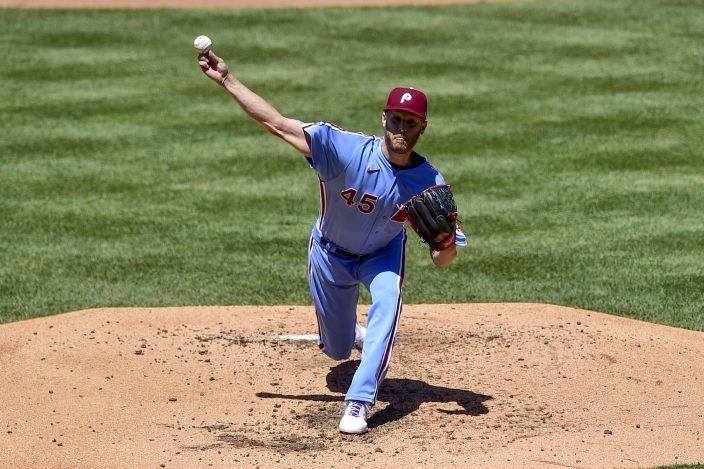 Philadelphia Phillies starting pitcher Zack Wheeler throws the ball during the third inning of a baseball game against the Milwaukee Brewers, Thursday, May 6, 2021, in Philadelphia. (AP PhotoDerik Hamilton)

Wheeler (3-2) and Brandon Woodruff engaged in a brilliant pitchers’ duel that ended when Bohm connected on a 97 mph fastball in the seventh for his fourth homer of the season. Rhys Hoskins added an RBI double in the eighth.

Woodruff (2-1) struck out 10 over the first five innings -- 11 total over 6 2-3 innings -- and allowed only Odubel Herrera’s single in the second until Bohm went deep.

Wheeler matched him pitch-for-pitch, giving up just Billy McKinney’s leadoff double in the third until Lorenzo Cain's one-out single in the ninth. McKinney was promptly erased when Luke Maile lined into a double play. Wheeler faced the minimum through eight. 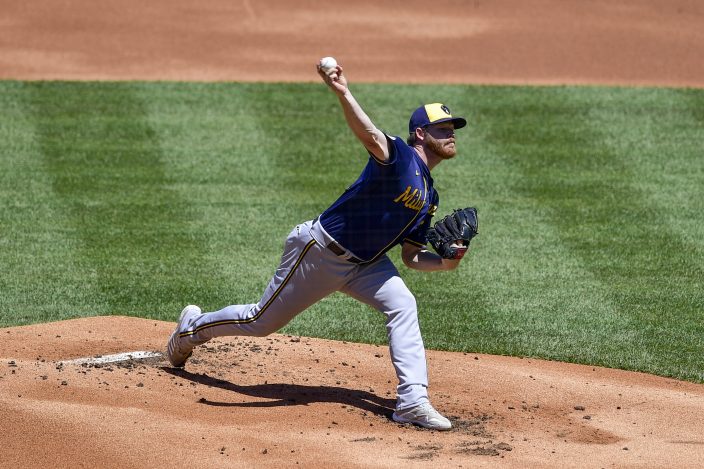 Milwaukee Brewers starting pitcher Brandon Woodruff throws the ball during the first inning of a baseball game against the Milwaukee Brewers, Thursday, May 6, 2021, in Philadelphia. (AP PhotoDerik Hamilton)

In a year of vanishing offense, Woodruff and Wheeler added to MLB hitters’ woes. The overall batting average was .233 coming into Thursday and pitchers have already tossed three no-hitters - including Baltimore’s John Means against Seattle a day earlier.

Wheeler got some defensive help in the fifth when catcher Andrew Knapp made a sliding catch near the visiting dugout to retire Travis Shaw on a foul out. Brewers right fielder Tyrone Taylor came right back in the bottom of the inning and chased down Herrera’s tailing flyball.

Neither performance on another windy day in Philly was a total surprise: Woodruff had only one earned run in 18 career innings against the Phillies and Wheeler had 2.90 ERA in five career starts against the Brewers.

Milwaukee Brewers' Luke Maile breaks his bat on a ground ball out to Philadelphia Phillies' Alec Bohm during the sixth inning of a baseball game, Thursday, May 6, 2021, in Philadelphia. (AP PhotoDerik Hamilton)

Woodruff was economical in his excellence and threw only 74 pitches over the first six innings. He threw 73 strikes out of 103 pitches total and walked two before he was pulled for Angel Perdomo.

Both pitchers were absolutely dealing against lineups without the other’s top slugger: Bryce Harper didn't start for Philadelphia for the fourth straight game because of a sore left wrist and Milwaukee’s Christian Yelich went on the injured list this week with a back injury. 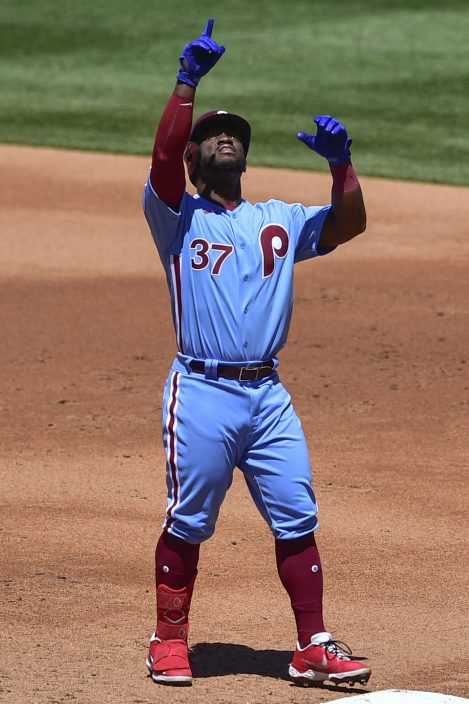 Philadelphia Phillies' Odubel Herrera points to the sky after hitting a single off Milwaukee Brewers starting pitcher Brandon Woodruff during the second inning of a baseball game, Thursday, May 6, 2021, in Philadelphia. (AP PhotoDerik Hamilton)

Phillies: RHP Archie Bradley expects to return in about two weeks from an oblique injury that’s sidelined him since April 11. Bradley signed a $6 million, one-year contract and was expected to add depth in the bullpen. He had a career-best 18 saves in 2019. Bradley said he came down with a cold about a week ago (“I was coughing and sneezing a lot”) that set his recovery week back a week. “I’ve been sitting inside watching a lot of games go by where I would have been a huge part in those games,” Bradley said. “I think I make a difference.” ... Placed LHP JoJo Romero on the 10-day IL with a left elbow sprain. LHP Ranger Suarez has been recalled from Triple-A Lehigh Valley.

Brewers: Head to Florida for a three-game set with the Marlins. The Brewers have not named a starter while the Marlins use LHP Trevor Rogers (3-2, 1.91 ERA).

Phillies: Start the road trip in Atlanta for a three-game series. The Phillies send RHP Zach Eflin (1-1, 3.49 ERA) to the mound while the Braves starter is TBD.