Nina Curtis has been picked to join the defending champion Australian team for the rest of SailGP’s second season as part of a developmental program to fast-track women into the global league.

Curtis, who won a silver medal at the 2012 London Olympics and sailed with Team Brunel on the final five legs of the 2017-18 Volvo Ocean Race, beat out Lisa Darmanin in a training camp during the season-opening regatta in Bermuda two weeks ago.

Curtis got the news from skipper Tom Slingsby during her mandatory 14-day quarantine in a Sydney hotel after returning from Bermuda. 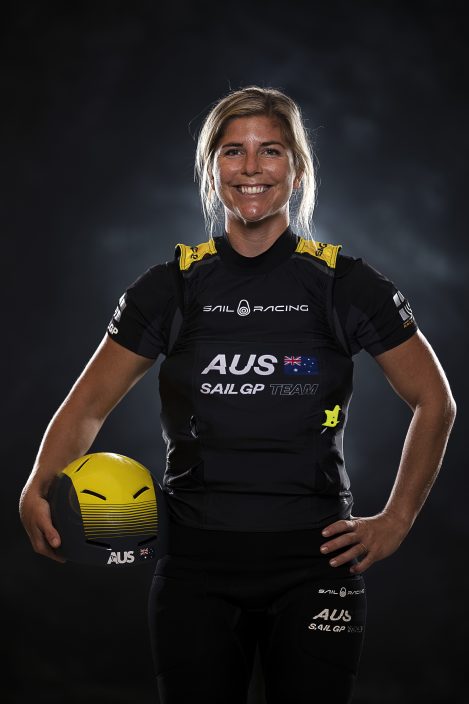 In this photo provided by SailGP, date not known, Nina Curtis poses for a portrait in Hamilton, Bermuda. Curtis has been picked to join the defending champion Australian SailGP team for the rest of the season as part of a developmental program designed to bring women into the global league. Curtis, who won a silver medal at the 2012 London Olympics and sailed with Team Brunel on the final five legs of the 2017-18 Volvo Ocean Race, beat out Lisa Darmanin in a training camp during the season-opening regatta in Bermuda two weeks ago. (Bob MartinSailGP via AP)

“I was so excited to hear the news so it’s definitely brightened my quarantine,” Curtis said in a phone interview.

Curtis said she was able to make the most of the limited time they had on the foiling 50-foot catamaran. It was the first time Curtis sailed on an F50, which is a turbocharged version of the catamarans that were used in the 2017 America’s Cup in Bermuda.

“I can’t even explain how awesome these boats are. They’re spaceships on the water,” she said. “They’re really, really cool. There’s a tremendous amount of G-force.

"Obviously, you can feel the speed, but the thing that took me by surprise is that once the boat is up and foiling out of the water, you get a little bit disconnected to the speeds you’re going until you look down. In Bermuda, I went the fastest I’ve ever been on a boat before in my life. It wasn’t a big deal for the boys, but for me, I’ve never been this fast before.”

She and Darmanin both got training time at flight controller, the position that controls the foils, as well as spending time as the sixth sailor, observing how the rest of the crew operates. Team Australia’s current flight controller, Jason Waterhouse, is Darmanin’s cousin and her Olympic partner in the Nacra 17 catamaran class. Waterhouse and Darmanin won a silver medal in the 2016 Olympics and will compete in the Tokyo Games this summer.

Curtis said flight controller would be a natural position for her because it’s not a physically demanding position, although she said there has been talk of using her as a grinder in light-air conditions. If crews ever expand to six, she said there’s the possibility of serving as tactician.

There’s no timetable for when women will sail in a race.

“We want to set all the females up for success and not failure in these boats,” Curtis said. “I think it will take one or two more events for us to get that knowledge together and get that knowledge on the boat. As the female sailor, I really want to be an asset to the boat and not something that brings the performance down. For me it’s all about fighting for time in training so I can be a benefit to the team.”

Slingsby, who skippered Australia to the inaugural championship and a $1 million, winner-take-all prize in 2019, said it was a tough decision between Curtis and Darmanin.

“We are working with the fastest sailing catamarans in the world, and with this comes the need for intense training to allow any athlete to safely race on these boats,” said Slingsby, an Olympic gold medalist and former America’s Cup champion. “The focus this season will be to fast-track Nina’s development with the goal of having her on the start line, racing with the team in the future.”

The eight-team, eight-regatta series continues June 5-6 in Taranto, Italy. The season will conclude next March in San Francisco with the winning crew again getting $1 million.

As Olympics near, Warriors' Brown eager for Nigeri ...

There was a small hurdle that offi ...