Albert Pujols wants to hook on with a new team and keep playing.

The 41-year-old superstar was cut Thursday by the Los Angeles Angels, abruptly ending a decade-long stint with his second major league club. He was designated for assignment one day after Pujols, dissatisfied with irregular playing time, had a late-night meeting with general manager Perry Minasian and team president John Carpino. 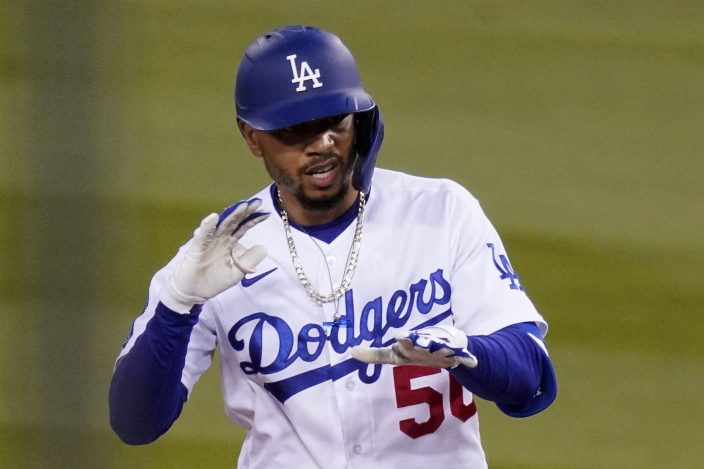 Los Angeles Dodgers' Mookie Betts gestures toward his bench after hitting a ground rule double during the first inning of a baseball game against the Cincinnati Reds Monday, April 26, 2021, in Los Angeles. (AP PhotoMark J. Terrill)

Pujols, batting .198 this season, is determined to play first base regularly for another team after he clears waivers, Angels manager Joe Maddon said. Pujols is fifth in major league history with 667 career homers and 13th with 3,253 hits.

“He wants to play, and he wants to be in the field,” Maddon said. “Hopefully he’s going to get that opportunity somewhere else, and believe me, we’re all going to be rooting for him.”

The three-time NL MVP for St. Louis was in the final season of a $240 million, 10-year contract with Los Angeles. 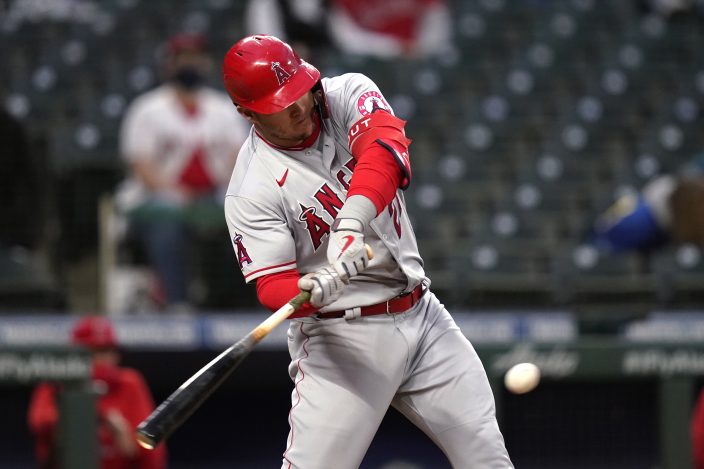 Los Angeles Angels' Mike Trout singles against the Seattle Mariners during the sixth inning of a baseball game Saturday, May 1, 2021, in Seattle. (AP PhotoElaine Thompson)

If another team picks up Pujols after he clears waivers, the Angels still would owe him the rest of his $30 million, minus a prorated portion of likely the major league minimum salary.

“Albert is not a bench player,” said Minasian, the Angels’ first-year GM. “Him being on the bench would not do him any good, and would not do the team any good. He’s as motivated as he’s ever been. If the situation was different and there were at-bats for him to play here, it would be different.” 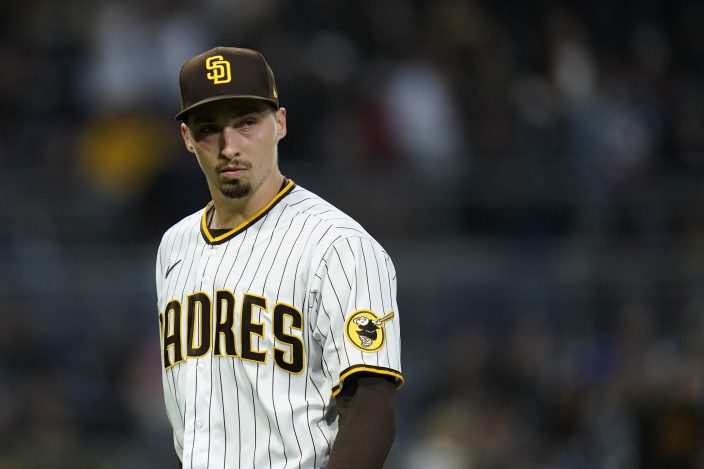 San Diego Padres' Blake Snell walks toward the dugout during the fifth inning of a baseball game against the San Francisco Giants, Saturday, May 1, 2021, in San Diego. (AP PhotoGregory Bull)

This seems almost poetic: St. Louis slugger Nolan Arenado will face his former team for the first time and go against the pitcher who was involved in the trade for him.

Arenado has a hit in three at-bats against lefty Austin Gomber, who along with four minor leaguers was dealt to the Colorado Rockies for the eight-time Gold Glove winner on Feb. 1. The Rockies also agreed to pay St. Louis roughly $51 million of the $199 million remaining on Arenado’s contract at the time.

It’s a deal that has many Rockies fans still seeing red heading into the three-game series in St. Louis. 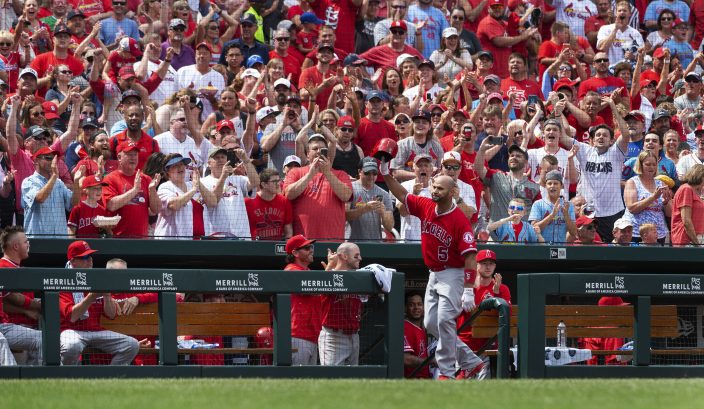 FILE - Los Angeles Angels' Albert Pujols waves to fans after getting a curtain call when he hit a home run during seventh inning of a baseball game against the St. Louis Cardinals in St. Louis, in this Saturday, June 22, 2019, file photo. Pujols has been designated for assignment by the Los Angeles Angels, abruptly ending the 41-year-old superstar slugger's decade with his second major league team. The Angels announced the move Thursday, May 6, 2021, a day after Pujols wasn't in their lineup for their fourth consecutive loss. (AP PhotoL.G. Patterson, File)

Gone is Jeff Bridich, the general manager with whom Arenado had a falling out over the team’s direction. Bridich stepped away last month from a squad that’s currently last in the NL standings.

Arenado was a second-round pick by the Rockies in the 2009 amateur draft. He’s developed into a five-time All-Star third baseman and one of the slickest fielders in the game.

Arenado is hitting .276 with five home runs and 22 RBIs this season. 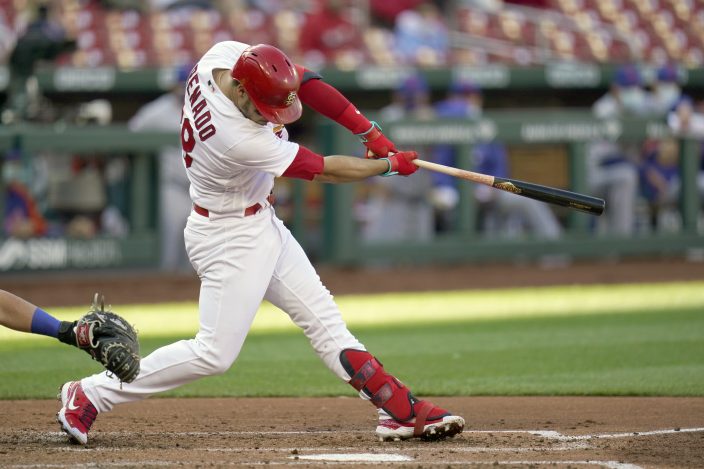 St. Louis Cardinals' Nolan Arenado hits an RBI single during the third inning in the first game of a baseball doubleheader against the New York Mets Wednesday, May 5, 2021, in St. Louis. (AP PhotoJeff Roberson)

A couple of intriguing matchups out West get started when Mookie Betts and the World Series champion Los Angeles Dodgers visit Mike Trout and the Angels in the Freeway Series, while the San Francisco Giants host San Diego with first place on the line in the NL West.

Toronto outfielder George Springer isn’t expected to be ready to rejoin the lineup when his latest stint on the 10-day injured list ends May 13.

Signed to a team-record $150 million, six-year deal in the offseason, the 2017 World Series MVP with Houston didn’t make his Toronto debut until April 28 because of two separate injuries, first a strained oblique muscle and later a quadriceps issue.

Springer again landed on the injured list after aggravating his strained right quad.

“I would expect it would take more than just the IL stint,” general manager Ross Atkins said.

Blue Jays reliever David Phelps was put on the IL because of a right lat strain. Infielder Joe Panik had an MRI after feeling calf pain and catcher Alejandro Kirk is expected to miss at least four weeks because of a left flexor strain.