Photographers in Latin America and the Caribbean. It was curated by AP photo editor Leslie Mazoch in Mexico City 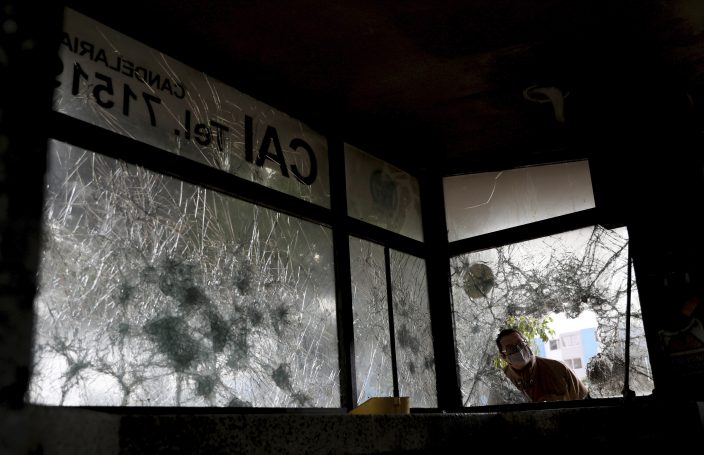 A man looks into a police post damaged by protesters the previous night in Bogota, Colombia, Wednesday, May 5, 2021. Protests that began last week over a tax reform proposal continue despite President Ivan Duque's withdrawal of the tax plan from congress on Sunday, May 2. (AP PhotoFernando Vergara) 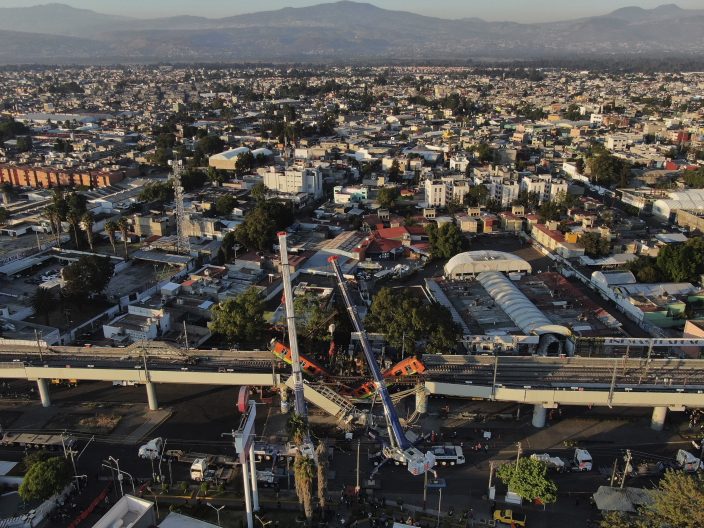 Subway cars dangle at an angle from a collapsed elevated section of the metro in Mexico City, Tuesday, May 4, 2021. The collapse killed at least 23 people and injuring at least 79, city officials said. (AP PhotoFernando Llano) 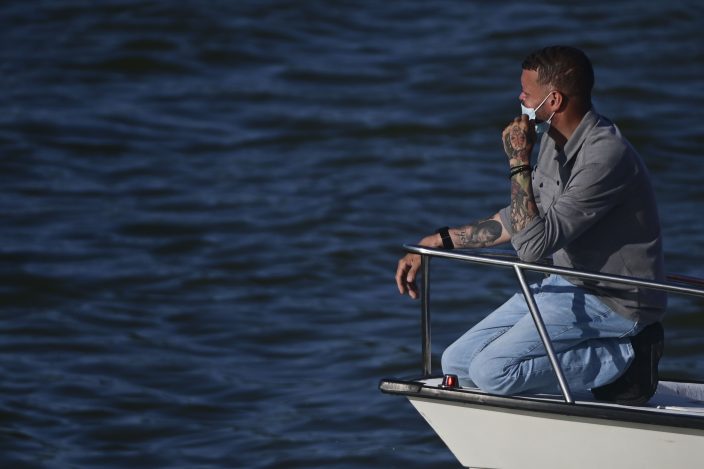 Jose Antonio Rodriguez, the father of 27-year-old Keishla Rodriguez, leaves the San Jose Lagoon after authorities found her remains there in San Juan, Puerto Rico, Saturday, May 1, 2021. A federal judge on Monday ordered Puerto Rican boxer Félix Verdejo held without bail after he was charged in the death of Rodriguez, his pregnant lover whose body was found in the lagoon. (AP PhotoCarlos Giusti) 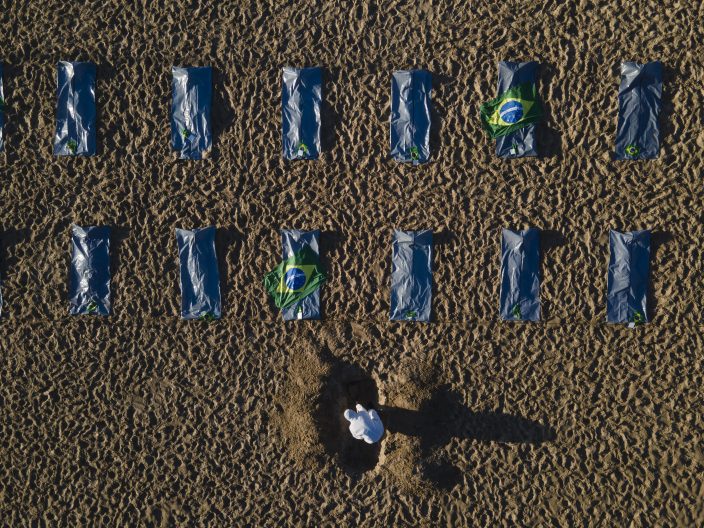 An activist from the NGO "Rio de Paz" digs a mock grave in the sand by symbolic body bags on Copacabana beach to protest the government's handling of the COVID-19 pandemic and to mark the milestone of 400,000 virus deaths in Rio de Janeiro, Brazil, Friday, April 30, 2021. (AP PhotoLucas Dumphreys) 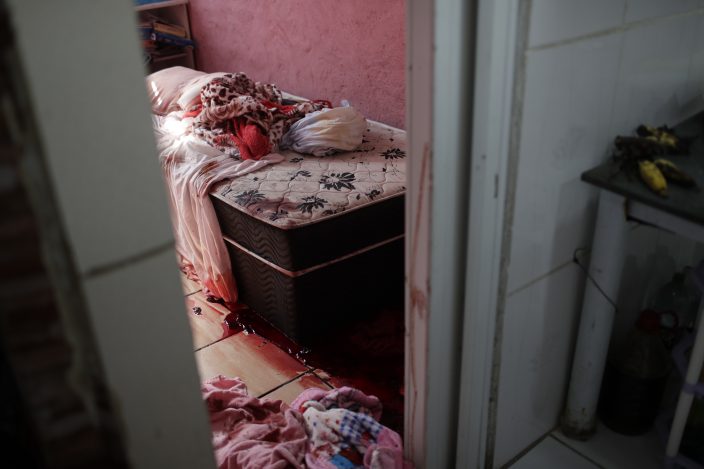 Blood covers the floor and a bed inside a home during a police operation targeting drug traffickers in the Jacarezinho favela of Rio de Janeiro, Brazil, Thursday, May 6, 2021. At least 25 people died including one police officer and 24 suspects, according to the press office of Rio's civil police. (AP PhotoSilvia Izquierdo) 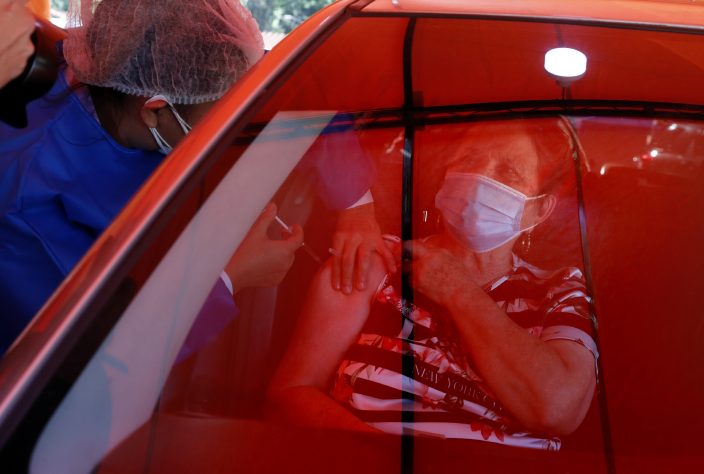 An elderly woman gets a shot of the AstraZeneca vaccine for COVID-19 from a car under a red tarp set up outside Trinidad Maternity Hospital in Asuncion, Paraguay, Friday, April 30, 2021. People older than age 75 are being vaccinated. (AP PhotoJorge Saenz) 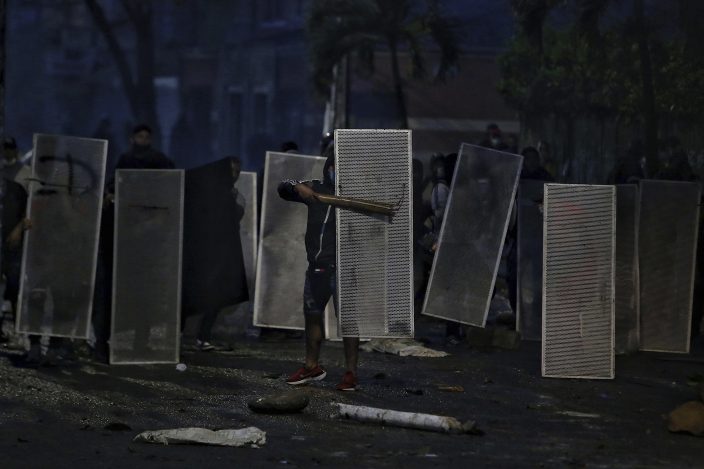 Protesters protect themselves with makeshift shields as they clash with police during a national strike to protest government-proposed tax reform in Cali, Colombia, Friday, April 30, 2021. (AP PhotoAndres Gonzalez) 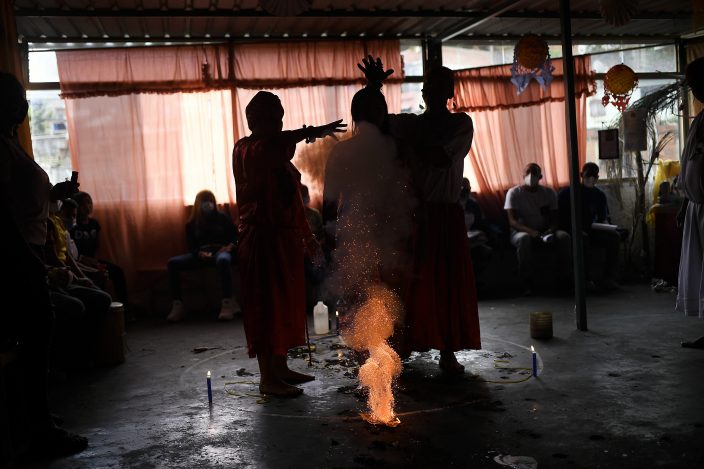 Yaruby Mendoza is attended by healers Hermano Sebastian and Hermana Maria Cristina at the Lino Valles Spiritual Center, in an area known as "The Alleyway of the Witches" in Caracas, Venezuela, Monday, May 3, 2021. Venezuelans have been turning to the Afro-Cuban tradition of Santeria for healing ceremonies aimed at curing everything from illness to heartache for decades. (AP PhotoMatias Delacroix) 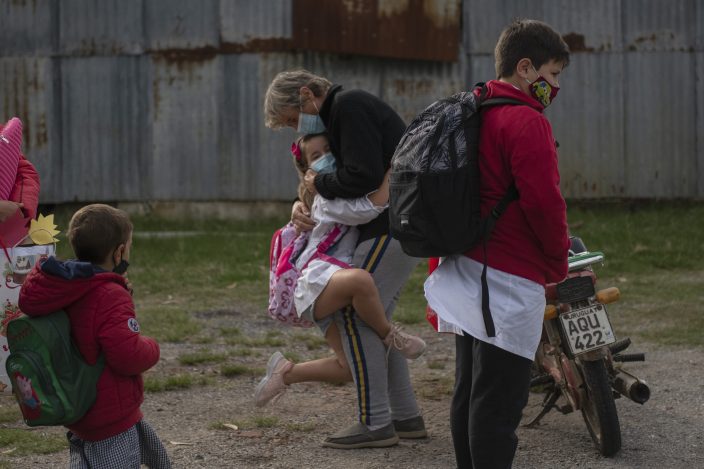 A student embraces a woman before entering school for the first time since it was closed due to the COVID-19 pandemic in Migues, Uruguay, Monday, May 3, 2021. Uruguay returned to face-to-face classes in some rural schools that have fewer than 20 students total and one teacher. (AP PhotoMatilde Campodonico) 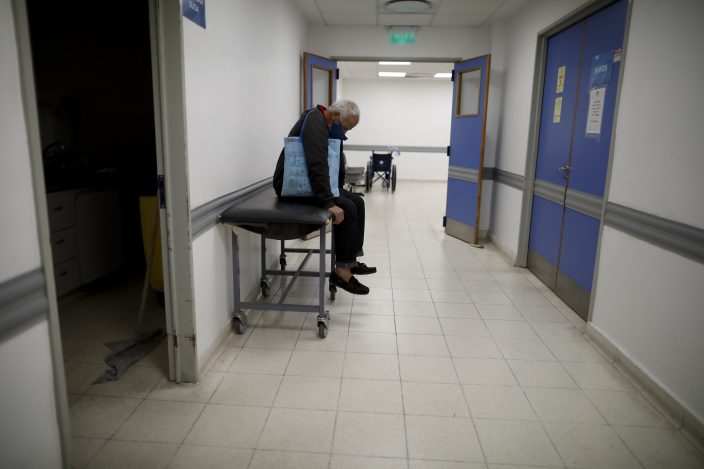 A man sits in a corridor as he waits for news of his wife who is suspected of having COVID-19 at the Dr. Norberto Raul Piacentini Hospital in Lomas de Zamora, Argentina, Saturday, May 1, 2021. (AP PhotoNatacha Pisarenko)