Mike Zunino homered, Brett Phillips had two hits during a seven-run eighth inning and the Tampa Bay Rays rallied for an 8-3 victory over the Los Angeles Angels on Thursday night.

The Angels capped one of the most stunning days in franchise history by blowing a late three-run lead as Tampa Bay completed a four-game sweep. Los Angeles began the day with a surprising move when they cut Albert Pujols, ab ruptly ending the 41-year-old superstar slugger’s decade-long tenure with the team. 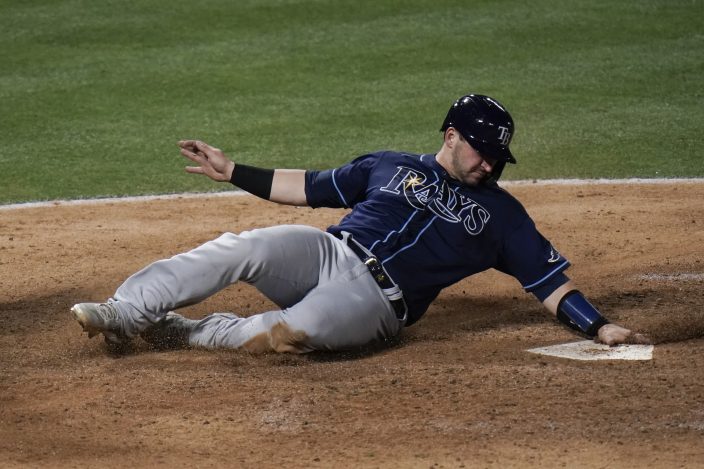 Tampa Bay Rays' Mike Zunino scores on a double by Brett Phillips during the eighth inning of the team's baseball game against the Los Angeles Angels, Thursday, May 6, 2021, in Anaheim, Calif. (AP PhotoJae C. Hong)

The move didn't appear to affect the Angels early on as Andrew Heaney pitched 6 2/3 innings and stymied the Rays with 10 strikeouts while allowing only four hits. But the bullpen imploded.

Zunino began the rally quickly after Heaney exited with a solo shot to left field off Mike Mayers (1-2) in the seventh. The Rays then broke it open in the eighth, sending 12 batters to the plate and getting six hits off three Angels pitchers.

Tampa Bay's first five hitters reached base in the eighth. Phillips began the outburst with a single and scored on Randy Arozarena's double to right-center. Arozarena tied it at 3-all when he came home on Manuel Margot's single. Margot stole second and third and gave the Rays the lead when he dashed home on Kurt Suzuki's passed ball. 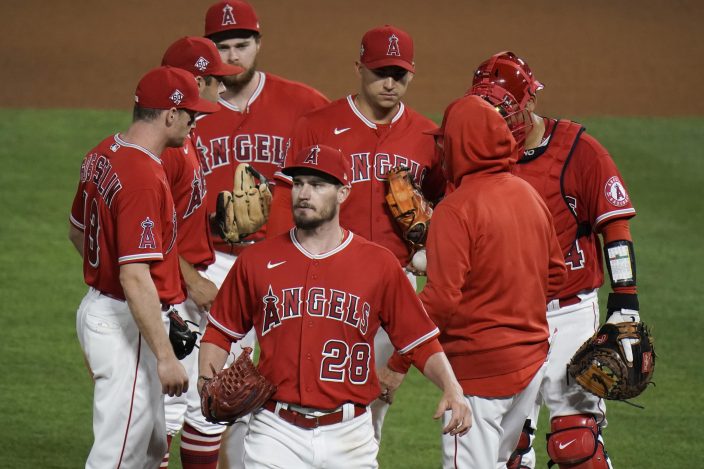 Yandy Díaz and Zunino followed with RBI singles before Phillips added a two-run double the second time he was up in the eighth.

The Angels' bullpen has allowed 78 runs, second-most in the majors.

Josh Fleming (2-3) got the win for the Rays, who have won five straight and posted their first four-game sweep at Angel Stadium since 2012. The left-hander allowed three runs in five innings after Collin McHugh opened with two shutout innings and five strikeouts. 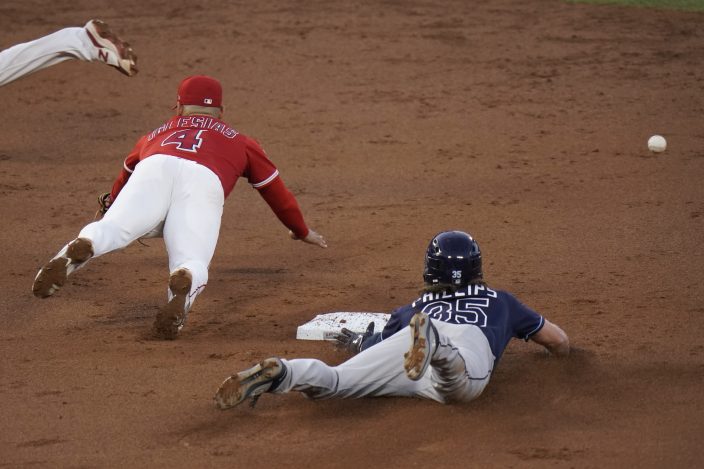 Shohei Ohtani hit his 10th home run of the season for the Angels, who have dropped a season-high five in a row.

Los Angeles scored all its runs in the third. Juan Lagares led off with a double off the wall in right-center and scored on Phil Gosselin's double down the left-field line. Gosselin tried to score on David Fletcher's bloop single to left but was thrown out by Arozarena.

Ohtani drove in Fletcher one pitch later when he launched Fleming's sinker into the left-field stands. The two-run shot tied Ohtani with Boston's J.D. Martinez and Atlanta's Ronald Acuña Jr. for the major league lead in homers. 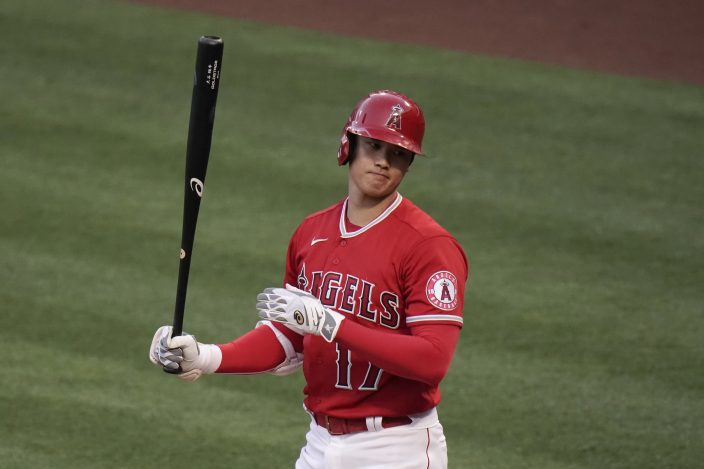 Los Angeles Angels' Shohei Ohtani reacts after striking out during the first inning of the team's baseball game against the Tampa Bay Rays, Thursday, May 6, 2021, in Anaheim, Calif. (AP PhotoJae C. Hong)

Heaney has thrown six or more shutout innings twice this season. His first six outs came via strikeout, the first time an Angels pitcher had done that since JC Ramirez in 2017.

Heaney allowed seven runs in three innings during his season debut, but has gone 2-1 with a 2.05 ERA in his last five. 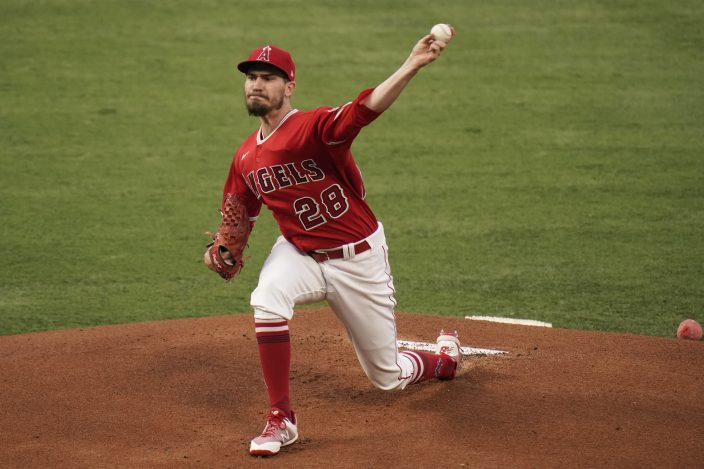 Rays: 2B Brandon Lowe, who hit a three-run homer in Wednesday's win, and CF Kevin Kiermaier got the night off. Lowe is 1 for 32 against left-handed pitchers this season.

Angels: RHP Chris Rodriguez (right shoulder inflammation) and C Max Stassi (concussion) were placed on the injured list. ... RHP Félix Peña was reinstated from the IL after a six-week stint due to a right hamstring strain. 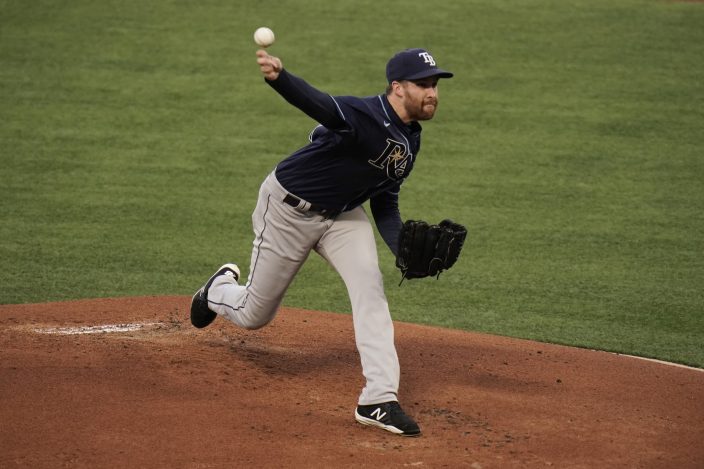 Angels: Remain at home for the Freeway Series against the Dodgers. RHP Griffin Canning (2-2, 6.20 ERA) looks to have another strong start after allowing only one unearned run with nine strikeouts in a May 1 win at Seattle. 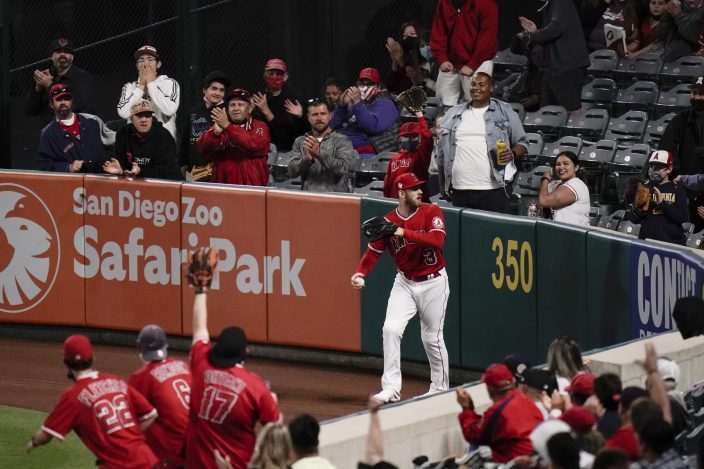 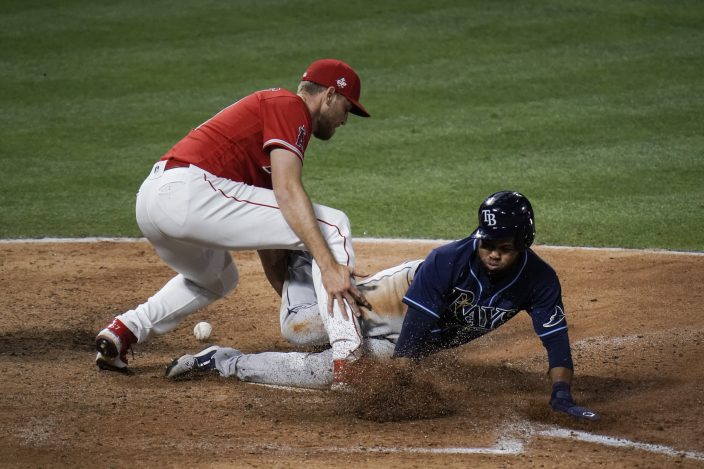 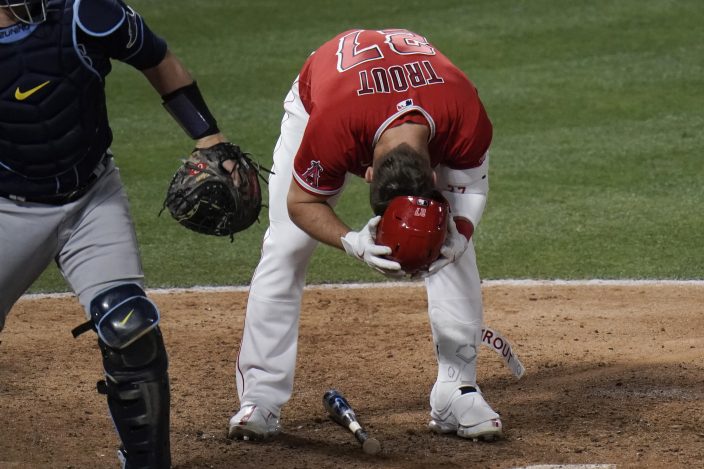 Los Angeles Angels' Mike Trout removes his helmet after striking out during the eighth inning of the team's baseball game against the Tampa Bay Rays, Thursday, May 6, 2021, in Anaheim, Calif. (AP PhotoJae C. Hong)