Republican Kevin McCarthy is leading his party to an inflection point, preparing to dump Rep. Liz Cheney from the No. 3 House leadership position and transform what's left of the party of Lincoln more decisively into the party of Trump.

The GOP leader argues that ousting Cheney has less to do with her very public criticism of the former president's lies about his 2020 election loss to President Joe Biden than her inability to set aside personal convictions and do her job. As conference chair responsible for communicating a unified party message, Cheney has lost the confidence of rank-and-file lawmakers, he said this week.

But in tossing aside Cheney, the daughter of the former vice president and as close as it gets to GOP royalty, and promising a “big tent” to win back power, McCarthy is hollowing out a cadre of lawmakers intent on governing while he is elevating the people and personalities most loyal to Donald Trump. In one stroke, he is amplifying the former president’s false claims about the election and seeking to mend his own tattered relationship with Trump, reasserting himself as Trump’s man in the House. 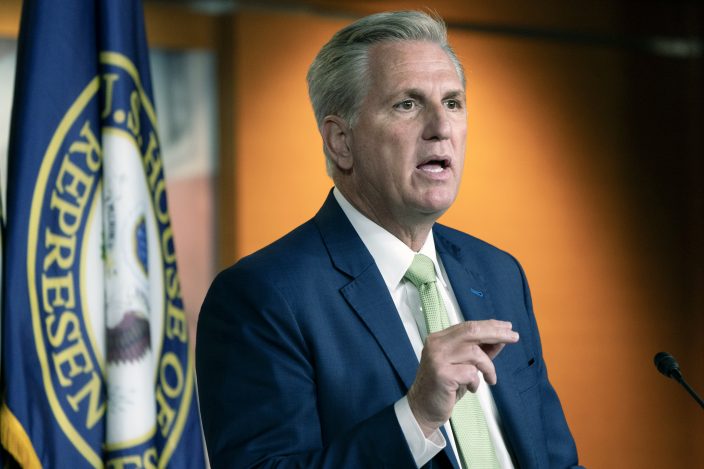 FILE - In this April 15, 2021, file photo, House Minority Leader Kevin McCarthy of Calif., speaks during a news conference on Capitol Hill in Washington. McCarthy is leading his party to an inflection point. House Republicans are preparing to dump Rep. Liz Cheney from the No. 3 leadership position. If so, McCarthy will have transformed what’s left of the party of Lincoln more decisively into the party of Trump. (AP PhotoJacquelyn Martin, File)

It’s a transformational moment for McCarthy, who resurrected his political career by attaching himself to Trump — who called him “My Kevin” — and is now on a glidepath to become House speaker, second in line to the presidency, if Republicans win control in next year's elections.

“This started as one thing and morphed into something else: It’s about the future.” 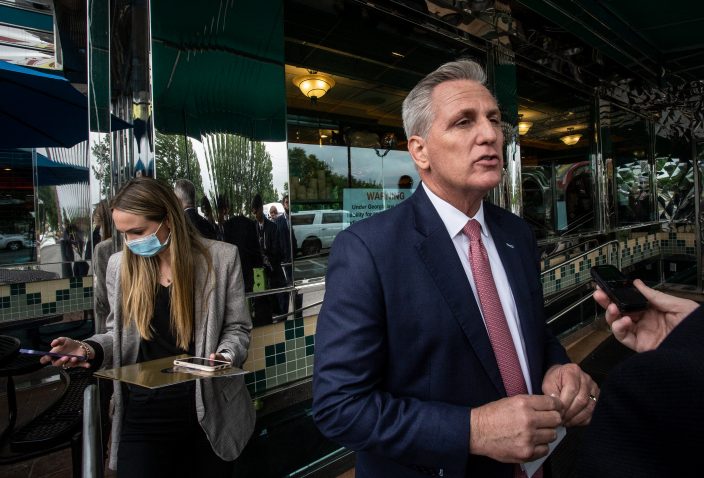 In this May 4, 2021, photo, House Minority Leader Kevin McCarthy, of Calif., speaks to a reporter outside a diner in Marietta, Ga. McCarthy and other Republicans decried Major League Baseball's decision to move the All-Star game out of Georgia amid concerns about changes to the state's voting laws. McCarthy is leading his party to an inflection point. House Republicans are preparing to dump Rep. Liz Cheney from the No. 3 leadership position. If so, McCarthy will have transformed what’s left of the party of Lincoln more decisively into the party of Trump. (AP PhotoRon Harris, File)

The vote as soon as next week is expected to be decisive, showing the power of Trump's reach, particularly on McCarthy. The GOP leader initially criticized Trump's actions after the 2020 election, saying he “bears responsibility” for the deadly Jan. 6 attack on the U.S. Capitol, the most serious domestic assault on the building in its history.

Five people died after Trump encouraged loyalists to “fight like hell” as Congress was certifying his defeat to Biden. In a private call during the insurrection, McCarthy had urged Trump to call off the rioters, only to face the president's rebuke.

“The saddest day I have ever had” in Congress, McCarthy said that night, even as he joined 138 other House Republicans in voting to overturn Biden's win.

McCarthy stood by Cheney when she faced a February challenge for leading 10 House Republicans to vote to impeach Trump for his role in the insurrection. McCarthy argued that the House GOP needed to stay united against newly empowered Democrats, and she easily survived.

But in between the lines, McCarthy was also considering the optics of the moment, according to Republicans who spoke on condition of anonymity to discuss the private vote. Booting Cheney so soon after the riot would be a bad look for the party, especially when House Republican leaders were also encouraging a unified vote of support for newly elected Rep. Marjorie Taylor Greene, a Trump ally who faced reprimand from Democrats over her conspiracy-laden social media rants.

The GOP leader counseled Cheney to stay on message, but as she continued to warn the party off Trump's falsehoods, he groomed a newly transformed Trump acolyte, Rep. Elise Stefanik, R-N.Y., as her replacement. Like McCarthy, she is raising millions of dollars for the GOP as a Trump defender.

A last straw was Cheney’s press conference at the House GOP’s retreat in Florida last month when Cheney criticized Trump anew and broke with McCarthy to back a bipartisan commission fully focused on investigating the Capitol attack.

In an essay in Wednesday's Washington Post, she warned colleagues, “History is watching."

Trump has made clear he wants Cheney out. During an event with the conservative Freedom Caucus at Mar-a-Lago ahead of the House GOP retreat, Trump told lawmakers that Cheney and other “RINOs,” including Senate leader Mitch McConnell and Sen. Mitt Romney of Utah, must go, according to two Republicans who spoke on condition of anonymity to discuss the private remarks. RINO refers to those considered insufficiently loyal or conservative — Republicans in name only.

In private calls with lawmakers, Trump had expressed similar displeasure with McCarthy, too, according to one of the Republicans.

“It's not like the ‘My Kevin’ days,” the Republican aide said.

Never fully supported by GOP’s far right flank, the California Republican has labored to win over the party’s conservatives by embracing Trump and giving the former president’s allies a seat at the table in House leadership.

McCarthy was among the first Republicans in Congress to endorse Trump’s presidential campaign and quickly became a close confidant and late-night telephone buddy, often fielding his calls in view of reporters in the Capitol.

In many ways, McCarthy had bridged the party’s path to the Trump era years earlier. He recruited the tea party class of Republicans who seized control of the House in the 2010 midterm elections, newcomers who shut down the government during hardball fiscal fights with then-President Barack Obama.

Underestimated by Democrats as a legislative lightweight, without a House Speaker Nancy Pelosi-style resume of committee work and policy chops to pass bills, McCarthy revels in outperforming expectations, steadily rising to the top GOP leadership position.

But McCarthy has always had other would-be leaders on his heels. After the Freedom Caucus led by Mark Meadows forced former Speaker John Boehner into early retirement, McCarthy withdrew his own bid to become speaker in 2015. The gavel slipped away again after Speaker Paul Ryan retired and Republicans lost House control in 2018.

McCarthy has faced potential challenges from conservative Rep. Steve Scalise, R-La., the GOP whip in charge of counting votes, though the two are more friendly rivals now, as well as from Rep. Jim Jordan, R-Ohio, the de facto leader of the swelling conservative ranks and another Trump confidant.

Jordan said McCarthy has done what the others failed to do — bring the Freedom Caucus and conservatives into the fold. While Boehner punished what he sometimes called the "knuckleheads,” and Ryan simply ignored them, McCarthy showers the far right with face time and rank. He made Jordan the top Republican on the Judiciary Committee, the perch he used to defend Trump from impeachment.

“He’s going to become the speaker if we take back the House," Jordan said an interview Thursday.

McCarthy, who declined to respond to an interview request, has said he wants House Republicans to focus their attention against Democrats, not on internal party rifts.

Without Cheney, he may have fewer dissenters to contend with.

“The frustrating thing about this is that they’re both right,” said Michael Steel, a former top Boehner aide.

“Cheney is correct that President Trump lost the presidential election ... and McCarthy is also right — the job of the Republican leader is to gain the majority and become speaker of the House.”