Many medical experts, opposition leaders and some of the Supreme Court judges have suggested the lockdown seems to be the only option with the virus raging in cities and towns, where hospitals are forced to turn patients away while relatives scramble to find oxygen. Crematoriums and burial grounds are struggling to handle the dead.

On Friday, India recorded a new record of 414,188 confirmed cases in the past 24 hours, Its tally has risen to more than 21.4 million since the pandemic began with faint hopes of the curve going down quickly. The Health Ministry also reported 3,915 additional deaths, bringing the total to 234,083. Experts believe both figures are an undercount. 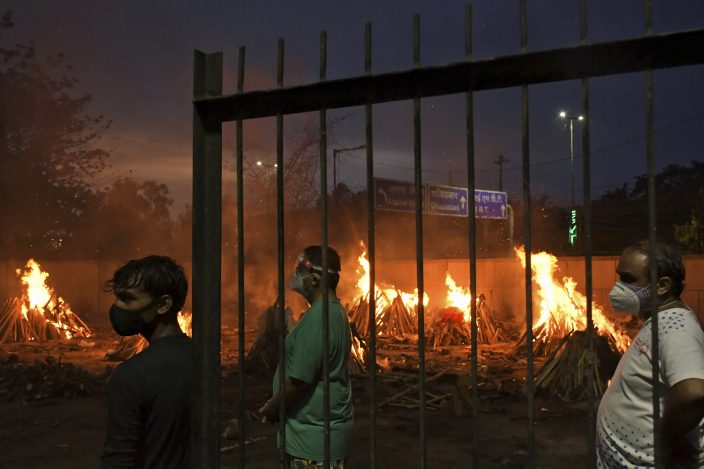 People watch burning funeral pyres of their relatives who died of COVID-19 in a ground that has been converted into a crematorium in New Delhi, India, Thursday, May 6, 2021. Infections in India hit another grim daily record on Thursday as demand for medical oxygen jumped seven-fold and the government denied reports that it was slow in distributing life-saving supplies from abroad. (AP PhotoIshant Chauhan)

The official daily death count has stayed over 3,000 for the past 10 days.

Over the past month, nearly a dozen out of India’s 28 federal states have announced less stringent restrictions than the nationwide lockdown imposed for two months in March last year.

Modi, who held consultations with top elected leaders and officials of the worst-hit states on Thursday, has so far left the responsibility for fighting the virus to poorly equipped state governments. 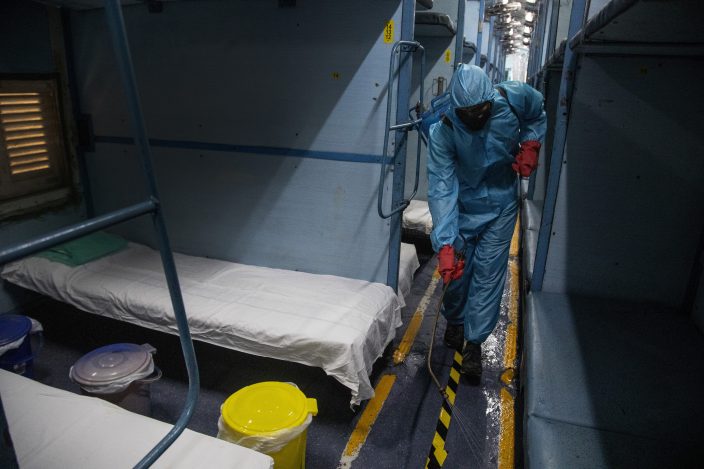 A health worker in personal protective equipment sanitizes a compartment of a train prepared as COVID-19 care centre in the wake of spike in the number of positive coronavirus cases, at a railway station in Gauhati, India, Thursday, May 6, 2021. Infections in India hit another grim daily record on Thursday as demand for medical oxygen jumped seven-fold and the government denied reports that it was slow in distributing life-saving supplies from abroad. (AP PhotoAnupam Nath)

Dr. Randeep Guleria, a government health expert, said a complete, aggressive lockdown is needed in India just like last year, especially in areas where more than 10% of those tested have contracted COVID-19.

Srinath Reddy, president of the Public Health Foundation of India, a public-private consultancy, acknowledged that different states were experiencing different intensities of the epidemic, but said a “coordinated countrywide strategy” was still needed.

According to Reddy, decisions need to be based on local conditions but should be closely coordinated by the center. “Like an orchestra which plays the same sheet music but with different instruments,” he said.

Anthony Fauci, President Joe Biden’s chief medical adviser, also suggested that a complete shutdown in India may be needed two to four weeks to help ease the surge of infections.

“As soon as the cases start coming down, you can vaccinate more people and get ahead of the trajectory of the outbreak of the pandemic,” Fauci said in an interview with the Indian television CNN News18 news channel on Thursday. He did not provide specifics of what a shutdown should entail.

He said it appears there are at least two types of virus variants circulating in India. He said B117, which is the U.K. variant, tends to be concentrated in New Delhi and that the 617 variant is concentrated in the worst-hit western Maharashtra state.

“Both of those have increasing capability of transmitting better and more efficiently than the original Wuhan strain a year ago,” Fauci said.

Modi imposed a two-month stringent lockdown last year on four hours’ notice. It stranded tens of millions of migrant workers who were left jobless and fled to villages with many dying along the way. Experts say the decision helped contain the virus and bought time for the government.

India's economy contracted by 23% in April-June quarter last year and showed recovery as the restrictions were eased. The International Monetary Fund's projection of 12.5% growth in 2021-22 financial year, beginning April, is expected to suffer again with the surge in infections.

Modi's policy of selected lockdowns is being supported by some experts, including Vineeta Bal, a scientist at the National Institute of Immunology. She said different states have different needs, and local particularities need to be taken into account for any policy to work.

In most instances, in places where health infrastructure and expertise are good, localized restrictions at the level of a state, or even a district, are a better way to curb the spread of infections, said Bal. “A centrally mandated lockdown will just be inappropriate,” she said.

Dr. Yogesh Jain Ganiyari of the Peoples Health Support Group, a low-cost public health program in the central state of Chhattisgarh, said that scientifically, lockdowns are the most effective way of curbing infections.

"But we don’t live in a lab. We need to take into account the humanitarian aspect,” said Ganiyari. “Those who look at lockdowns just as disease control mechanisms are heartless. You have to think about the people.”

Pope on Myanmar: Houses of worship serve as neutral ref ...

Pope Francis on Sunday decried the ...