Medical student Natty Jumreornvong has a vaccine and protective gear to shield her from the coronavirus. But she couldn't avoid exposure to the anti-Asian bigotry that pulsed to the surface after the pathogen was first identified in China.

Psychiatry patients have called her by a racist slur for the disease, she said. A bystander spat at the Thai-born student to “go back to China” as she left a New York City hospital where she's training.

And as she walked there in scrubs Feb. 15, a man came up to her, snarled “Chinese virus,” took her cellphone and dragged her on a sidewalk, said Jumreornvong, who reported the attack to police. The investigation is ongoing. 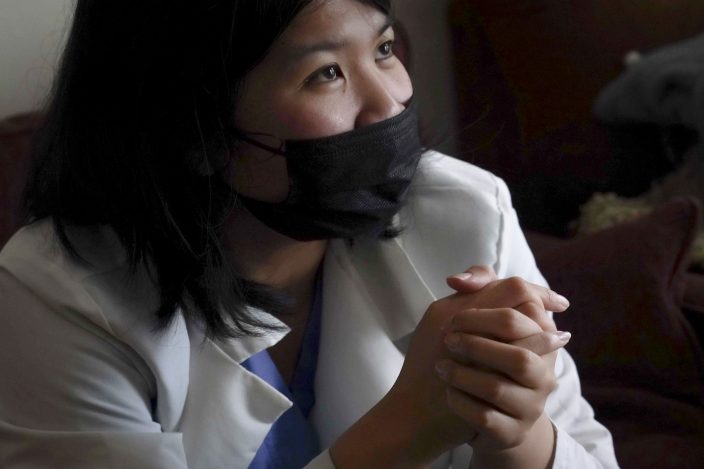 Natty Jumreornvong, a Thai-born medical student at the Icahn School of Medicine at Mount Sinai, during an interview recalls being the victim of anti-Asian attacks, Thursday April 29, 2021, in New York. Jumreornvong is among medical professionals of Asian and Pacific Island descent who feel the anguish of being racially targeted because of the virus while toiling to keep people from dying of it. (AP PhotoBebeto Matthews)

For health care workers of Asian and Pacific Islander descent, “it seems like we’re fighting multiple battles at the same time — not just COVID-19, but also racism,” says Jumreornvong, a student at the Icahn School of Medicine at Mount Sinai.

Asian Americans and Pacific Islanders have faced a tide of harassment and attacks in many settings during the pandemic. But those in health care are feeling the particular, jarring anguish of being racially targeted because of the virus while toiling to keep people from dying of it.

“People in my community have gone from being a health care hero to, somehow, a scapegoat,” said Dr. Michelle Lee, a radiology resident in New York. She rallied 100 white-coat-clad medical workers in March to denounce anti-Asian hate crimes. 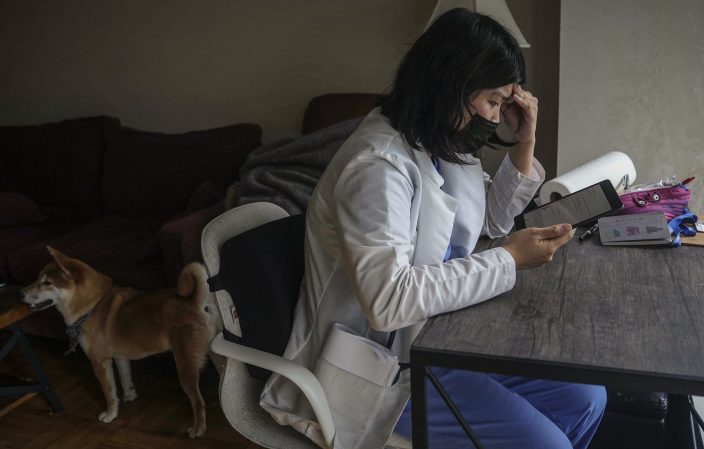 Natty Jumreornvong, a Thai-born medical student at the Icahn School of Medicine at Mount Sinai, reads a tablet after arriving home, Thursday April 29, 2021, in New York. Jumreornvong, a victim of anti-Asian attacks, is among medical professionals of Asian and Pacific Island descent who feel the anguish of being racially targeted because of the virus while toiling to keep people from dying of it. (AP PhotoBebeto Matthews)

“We’re not bringing you the virus,” said Lee, who recalls strangers on the street spitting on her twice in the last year. “We are literally trying to help you get rid of the virus.”

People of Asian and Pacific Islander descent make up about 6% to 8% of the U.S. population but a greater share of some health care professions, including around 20% of non-surgeon physicians and pharmacists and 12% to 15% of surgeons, physical therapists and physician assistants, according to federal statistics.

Before the pandemic, studies found that 31% to 50% of doctors of Asian heritage experienced on-the-job discrimination ranging from patients refusing their care to difficulty finding mentors. That's a lower proportion than Black physicians, but higher than Hispanic and white doctors, according to a 2020 study that reviewed existing research. In a separate 2020 study of medical residents, all those of Asian heritage said patients had quizzed them about their ethnicity. 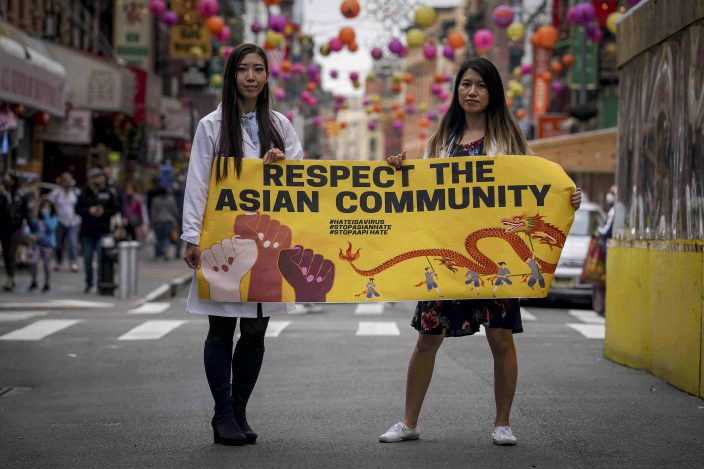 Dr. Michelle Lee, left, a radiology resident, and Ida Chen, right, a physician assistant student, unfold a banner Lee created to display at rallies protesting anti-Asian hate, Saturday April 24, 2021, in New York's Chinatown. Lee, who is Korean-born, and Chen, who is American-born Chinese, join medical professionals of Asian and Pacific Island descent who feel the anguish of being racially targeted because of the virus while toiling to keep people from dying of it. (AP PhotoBebeto Matthews)

Columbia University medical student Hueyjong “Huey” Shih recalls being confronted with “a lot of assumptions, all boiled into one very inappropriate question” from a colleague in a hospital: Was Shih an only child because of China's former one-child policy?

The Maryland-born Shih, whose family hails from Taiwan, said the colleague apologized after being set straight. Writing in the health news site Stat, he and medical students Jesper Ke and Kate E. Lee implored health institutions to include Asian Americans' and Pacific Islanders' experiences in anti-racism training.

For generations, Asian Americans have contended with being perceived as “perpetual foreigners” in a country with a history of treating them as threats. Officials wrongly blamed San Francisco's Chinatown for an 1870s smallpox outbreak, barred many Chinese immigrants under the 1882 Chinese Exclusion Act and forced Japanese Americans into internment camps even as tens of thousands of their relatives served in the U.S. military during World War II. 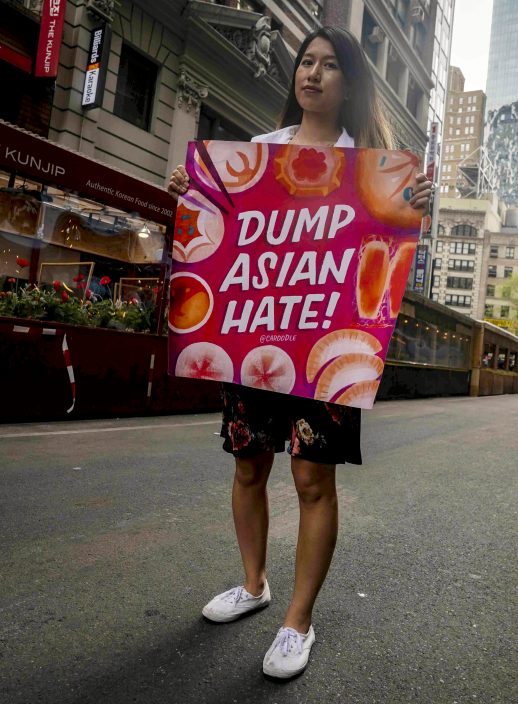 Ida Chen, a physician assistant student, unfold a banner she carry at rallies protesting anti-Asian hate, Saturday April 24, 2021, in New York's Chinatown. Chen, who is American-born Chinese, join medical professionals of Asian and Pacific Island descent who feel the anguish of being racially targeted because of the virus while toiling to keep people from dying of it. (AP PhotoBebeto Matthews)

During the pandemic, former President Donald Trump repeatedly called COVID-19 the “China virus” and by other terms that activists say fanned anger at Asian Americans.

Police reports of anti-Asian hate crimes in 26 big U.S. cities and counties shot up 146% last year, while hate crimes overall rose 2%, according to California State University, San Bernardino's Center for the Study of Hate and Extremism. The advocacy group Stop AAPI Hate fielded nearly 3,800 reports of assault, harassment and discrimination from mid-March 2020 through the end of February — before a gunman killed eight people, including six of Asian heritage, at Atlanta-area massage businesses in March.

The statistics don't break out health care workers among the victims.

The escalation “makes racism seem a lot scarier than the virus” to Dr. Amy Zhang, an anesthesiology resident at the University of Washington’s hospitals.

“It’s a constant fear. You never know when you’re going to get targeted," she says.

Early in the pandemic, she came face-to-face with the risk of COVID-19 while intubating patients. And face-to-face with racism when a white man on the street muttered a vulgarity at her about China and “giving us smallpox,” then started following her while yelling racial epithets and sexual threats until she got inside the hospital, she said.

“Despite the fact that I clawed myself out of poverty to chase the American dream, despite the fact that I can and have saved lives under stressful conditions, none of this protects me from racist vitriol,” Zhang wrote in Crosscut, a Pacific Northwest news site. She's a daughter of Chinese immigrants who worked long hours for low wages.

These days, New York physician assistant student Ida Chen carries pepper spray all the time, sets her cellphone to let all her friends know her location and doesn't roam far alone. For a time, she hid the roots of her dark brown hair under a hat so only the dyed blonde ends would show.

She started taking those precautions after a man biked up to her on a Manhattan street in March 2020 and sneered that he'd be “into you, but I don’t want to get the coronavirus,” then followed her while hollering slurs until she called 911, she said.

“I went into medicine thinking: I treat people with the best intention possible,” said Chen, who has Chinese heritage. “It hurts that someone’s not reciprocating that kind of empathy and good intentions.”

Chen and some others say the Georgia shootings propelled them to speak out about what they see as longtime minimization of anti-Asian racism.

“The whole reason I became a doctor is to help my community,” says Lee, a daughter of South Korean immigrants with no other physicians in the family. “If I don’t speak up for my community, what have they sacrificed — done everything they’ve done — for?”

Jumreornvong, who identifies as queer, said she had experienced discrimination before. But it felt different to be targeted because of her race, and in a country where she pictured the American dream as trying “to make it a better place for everyone and yourself.”

“For a moment, I was a little pessimistic about whether or not the people want me here,” she said. But she focused on how colleagues rallied around her, how the hospital expressed support, how patients have shown appreciation for her work.

“I still do believe in the best of America,” she said.