The key vote at 3 a.m. in the Texas House followed hours of debate as Democrats, who had little means of stopping the bill in the GOP-controlled state Capitol, deployed technical challenges and hours of questioning that the bill's author, Republican state Rep. Briscoe Cain, appeared unprepared at times to answer. Finally, an agreement was reached between Republicans and Democrats leaving the bill with 20 amendments that significantly watered down some of what advocates called the most problematic aspects of the bill as it passed the key vote 81-64.

The amendments lowered initially proposed enhanced criminal penalties, allowed poll watchers to be removed if they breach the peace and clarified that election judges and volunteers wouldn't be held liable for honest mistakes. Additionally, they instructed the state to send voter registration applications to high schools and instructed the state to develop an online format for tracking early ballots. 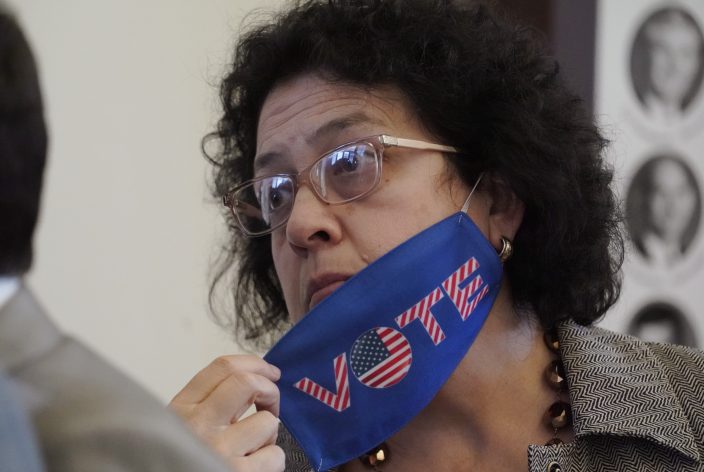 State Rep. Celia Israel, D-Austin, listens to fellow lawmakers in the House Chamber at the Texas Capitol as they wait to hear debate on voter legislation in Austin, Texas, Thursday, May 6, 2021. (AP PhotoEric Gay)

Thursday's bill was combined with a similar bill, which already passed the Senate, and both chambers still need to negotiate a final version before it goes to Republican Gov. Greg Abbott, who has broadly defended the measures. The session ends May 31.

“It is old Jim Crow dressed up in what our colleagues are calling election integrity,” said Democratic state Rep. Jessica Gonzalez. 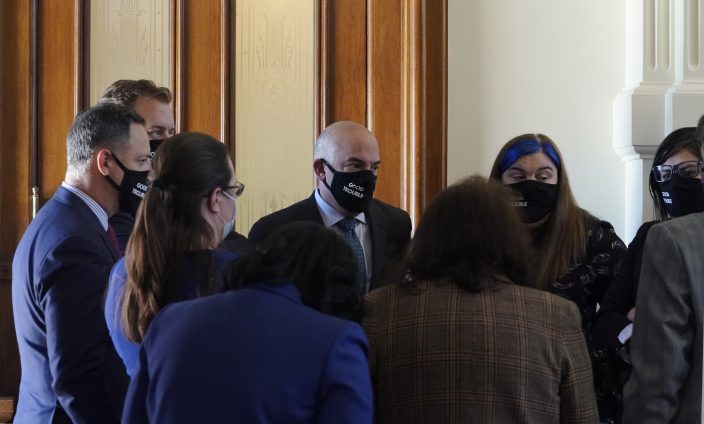 Democratic lawmakers gather in the House Chamber at the Texas Capitol as they wait to hear debate on voter legislation in Austin, Texas, Thursday, May 6, 2021. (AP PhotoEric Gay)

Abbott, who has not wavered in his backing of his party's restrictions and has lashed out at businesses that have spoken out, reiterated his support Thursday.

“I made election integrity an emergency item this session to help ensure every eligible voter gets to vote & only eligible ballots are counted,” Abbott tweeted.

Cain, who chairs the House Elections Committee and who authored the House version of the voting bill, echoed those sentiments. Cain has been an ardent support of former President Donald Trump, who continues to make false claims that fraud cost him the 2020 election.

There were no major problems or fraud — which is extremely rare — reported in Texas and Trump carried the state in November.

Cain, who in March made a procedural gaffe that delayed testimony on the bill after hundreds of people showed up to testify, came under sharp questioning from Democrats who pressed him over the bill's intent and whether he understood what the language in his own legislation meant.

“We don’t need to wait for bad things to happen to protect the security of the election,” Cain said. “I don’t believe that this is voter suppression, I believe it is voter enhancement.”

Other restrictions in Cain's bill would outlaw Texas county officials from sending mail-ballot request forms to all registered voters, efforts voting officials in Harris County — where Cain is from — put in place last year to expand ballot access when in-person gatherings were more hazardous because of the coronavirus pandemic. Harris County, which includes Houston, is also a Democratic stronghold where 44% of the nearly 5 million residents are Latino and 20% are Black.

Voting rights groups say poor and minority voters will bear the brunt of GOP restrictions, and that Republicans are counting on the privilege of their voters to overcome hurdles. On Tuesday, more than 50 companies and business organizations, including some in Texas, released an open letter expressing opposition to “any changes” that would make it harder to vote in that state.

Republicans in Texas have angrily rejected those accusations. They say the measures would only rein in powers that county leaders never had in the first place.

One Republican in the Texas House, Rep. Lyle Larson, spoke out this week against his party's proposals in an opinion column in his hometown newspaper. But he has been a lone public voice of dissent in his party in the Texas Capitol.

“The suppression tactics included in this bill would hurt the Republican Party as much or more than its opposition,” Larson wrote in the San Antonio Express-News. “One can only wonder — are the bill authors trying to make it harder for Republican voters to vote?”

Acacia Coronado is a corps member for the Associated Press/Report for America Statehouse News Initiative. Report for America is a nonprofit national service program that places journalists in local newsrooms to report on undercovered issues.