Growing up an avid reader, Kwana Jackson knew where to look for romance novels with Black characters: Segregated in the “African American interest” section where only determined shoppers would find them.

When Jackson became a published author she saw other ways in which writers of color were obscured, potentially affecting both book sales and the odds their work would catch the entertainment industry’s attention.

“That’s why, after 10 novels, I was surprised and thrilled when my agent came to me and said, ‘We’ve had interest in ‘Real Men Knit,’” Jackson said of her 2020 novel about four brothers in New York’s Harlem, optioned by a production company for a potential TV series. 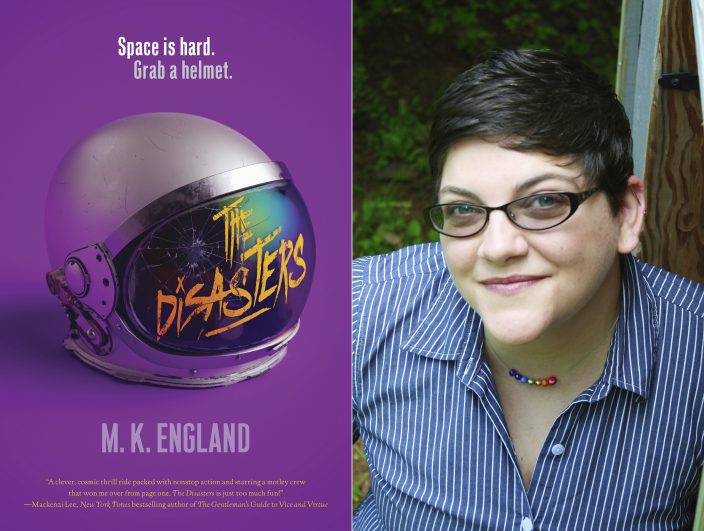 This combination photo shows cover art for "The Disasters," left, and a portrait of author M.K. England, whose debut novel is in development for the CW network. (HarperTeen via AP, left, and M.K. England via AP)

What she calls a dream come true is a pragmatic reflection of the unprecedented number of TV outlets in need of shows and growing pressure for inclusive fare — a one-two punch creating opportunities for overlooked writers and ignored perspectives.

“There’s a huge appetite for diverse voices and for almost forgotten voices,” said Steve Fisher, head of intellectual property and a partner at the APA talent agency.

While the entertainment industry was born hungry for adaptations — a 1908 version of “The Count of Monte Cristo” is early proof — today’s beneficiaries include writers of color, those in the LGBTQ community and women.

When Jason Bateman’s film and TV production company sought the rights to APA client Tess Sharpe’s novel “The Girls I’ve Been,” Fisher met with executive Tracey Nyberg, who explained the company's keen interest: Sharpe represents both a female and LGBTQ point of view “and we want to be part of the vanguard of new voices out there,” Fisher recalled Nyberg saying.

Science fiction and young-adult author M.K. England's debut novel was quickly snapped up. England identifies as nonbinary and queer, and their characters reflect varied ethnic and religious backgrounds along with LGBTQ diversity.

England's space adventure “The Disasters” was optioned before its late 2018 hard-cover publication and is in development for the CW network. While England knows adaptations differ from source material, they will take the win if the series comes to fruition — which, they realistically note, isn't guaranteed.

“I just love the work so much, I love the characters so much,” England said. “Just the chance of those getting out to more people means a lot, even though I know they will not be the same versions I wrote.”

Payment for screen rights is a welcome addition to a writer's income, but “nobody's getting wealthy over here," England said. “All I want is a sustainable career. I’m not looking for Scrooge McDuck'ing it.”

Jackson, who said she strives to write stories that portray Black and other ethnic characters fully, both in conflict and love, believes such depictions on TV have the power to chip away at stereotypes and build empathy.

“We need to change that perception of how we've been shown. We are just like anyone else, with real stories, real love, real joy, real problems,” she said.

Sean Berard, literary manager with the Grandview management agency, credits publishers for making the effort to find stories that are “coming from authentic places” and for bringing deserved attention to their authors.

“We hear from time to time a (rights) scramble for a certain project, a certain book, that's not even published,” Berard said.

Such fierce competition was inevitable. Within a year’s time, Netflix, Amazon and Hulu were joined by new streaming services including Disney+, Apple TV+, HBO Max and Peacock, all jockeying for viewers and justifying their subscription fees alongside premium cable channels including HBO and Showtime.

Overall demand by the entertainment industry for content has “increased exponentially” in the last few years, said Michael Cader, founder of the Publishers Marketplace newsletter. Streaming services are among the neediest outlets, and book-related content “often brings a built-in audience and respect,” he said.

They industry has also become acutely aware of demands for change, facing organized criticism in the form of #OscarsSoWhite and the #MeToo movement, among others, and within the context of the country's rising social and political tensions.

Established writers are among the beneficiaries of the scramble for content, including those whose literary novels make for a more challenging transfer to the screen. Colson Whitehead, for example, has been “a fabulous writer for decades and now he’s finally getting his adaptation,” Cader said.

Whitehead's 2016 Pulitzer Prize-winning novel “The Underground Railroad” is the African American writer's inaugural work brought to the screen, the basis of an Amazon series debuting May 14.

Sci-fi and fantasy author N.K. Jemisin became the first Black writer to win the prestigious Hugo Award for best novel, for 2015's “The Fifth Season,” then made it three in a row. Jemisin's work has yet to be adapted, but her “The Inheritance Trilogy" reportedly was optioned earlier this year.

Although Black-themed projects have been in the forefront, producers are beginning to cast a wider net. Native American author Angeline Boulley’s 2021 debut novel “Firekeeper’s Daughter,” a thriller set on an Ojibwe reservation, is being developed for Netflix by Barack and Michelle Obama’s production company. Charles Yu's National Book Award-winning 2020 novel “Interior Chinatown” is in development for Hulu, which ordered a pilot based on the forthcoming debut novel “Olga Dies Dreaming” by Xochitl Gonzalez.

Despite the signs of change, M.K. England, for one, isn't ready to sit back and applaud.

“People say, ‘Everything’s fine now, we have achieved equality here, the industry is no longer racist or homophobic because, see, we have these things,'" England said. “It's just not the case. There’s still lots and lots of work to be done, especially in terms of race representation and having people of color actually in the industry, calling the shots.”