Arlo White is fond of saying fans can always count on the Premier League to supply an abundance of storylines. The past couple of weeks have run the gamut.

White and NBC have had one of the more interesting weeks since they started covering England's top soccer league in 2013. It began last Sunday when White described fans storming Manchester United's home ground at Old Trafford, leading to the cancellation of their match against Liverpool.

It continues Saturday when Manchester City hosts Chelsea. A City win would give them their third league title in four seasons. 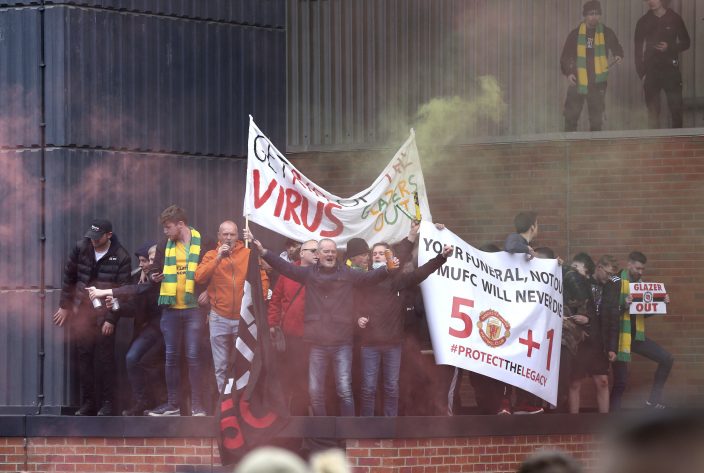 Fans hold up banners as they protest against the Glazer family, owners of Manchester United, before their Premier League match against Liverpool at Old Trafford, Manchester, England, Sunday, May 2, 2021. (Barrington CoombsPA via AP)

“When the games come thick and fast there always is something extra,” White said by phone from England.

White expected United fans to protest after the plan to leave the Premier League for the breakaway European Super League collapsed two weeks ago. Supporters have long been frustrated with the Glazer family, who purchased the famed club in 2005.

White had been briefed by NBC's security team that a sizable demonstration was expected outside the stadium, which had also happened at Chelsea and Arsenal following the Super League decision. The difference with this one is that fans actually got inside the stadium and it led to the postponement of the match.

“We were part of a very small band of people in the press box. We could hear the cheers and chants and firecrackers going on outside. We heard it was going to be peaceful,” White said. “We heard a loud clattering and then voices getting very close.”

White went on air to describe the protests, which created an interesting two-screen experience. On one side were fans demonstrating while the other showed the second half of Arsenal's 2-0 win over Newcastle.

While White hopes the Super League fiasco serves as a wakeup call for European soccer to address some of its problems, he thinks this won't be the last time someone tries to form a league of the continent's top soccer powers.

The match Saturday should return the focus to the field, though. City was languishing in the middle of the league standings in November before going on a 15-match winning streak that ended in early March. Chelsea has taken points in 14 of 15 Premier League matches since Thomas Tuchel took over as coach in January to move into fourth place. The top four clubs automatically qualify for the Champions League.

The two clubs will meet again May 29 in the Champions League final after both won their semifinal rounds earlier in the week. Both games will have plenty of interest for U.S. soccer fans with Chelsea midfielder Christian Pulisic facing Manchester City goalkeeper Zack Steffen.

“It will be a dress rehearsal for the Champions League final,” White said. “Both coaches have done remarkable jobs. What (Manchester City's) Pep (Guardiola) has done is remarkable. They have taken the division by the scruff of its neck. Tuchel is only on an 18-month contract at Chelsea, but I would expect him to get renewed.”

Combined viewership for Premier League games on NBC and NBCSN are down 9% from last season, but games on NBC are averaging 869,000 viewers, which is up 4%. Eight matches have averaged over 1 million, which is one more than all last season.

NBC has one more season on its current Premier League contract as U.S. rights are expected to come up for negotiation during the summer. Rights are usually awarded in three-year cycles, but NBC ambitiously secured a six-year contract in 2015.