Russell Westbrook’s stat lines have been looking like typos in the box score lately — the 14-point, 21-rebound, 24-assist game this week, for example, or the 18-18-14 five nights earlier — and now he’s on the verge of something historic.

The Washington Wizards point guard’s next triple-double, which could come as soon as Saturday in a game at the Indiana Pacers that has playoff implications, will be the 181st of Westbrook's career, tying Oscar Robertson’s NBA record that has stood for nearly a half-century. 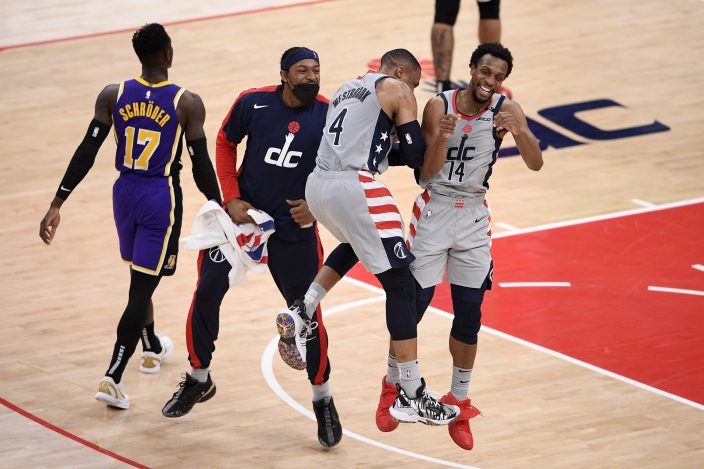 Westbrook's stellar play of late not only has guaranteed him his fourth season averaging a triple-double — the current numbers are 21.8 points, an NBA-best 11.4 assists and 11.4 rebounds (sixth in the league) — but, of more immediate import to the Wizards, also has been translating into victories.

Washington has won 14 of its past 18 contests, including an eight-game winning streak that was the team's longest run since 2001. That's propelled the Wizards into 10th in the Eastern Conference standings at 31-36, good enough to be in position for a play-in berth, just a half-game behind Indiana for ninth and holders of a 3½-game lead over the 11th-place Chicago Bulls entering Friday.

And while All-Star shooting guard Bradley Beal, who is second in the NBA in scoring average, is playing a key role, certainly — “They complement each other well, and it's getting better,” coach Scott Brooks said — Westbrook is getting credit for doing more to help the team than all of the numbers next to his name. 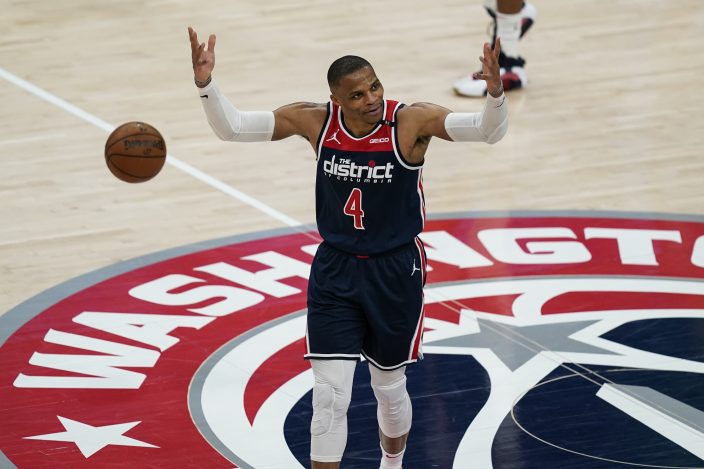 Washington Wizards guard Russell Westbrook reacts with the fans during a timeout during the second half of a basketball game against the Indiana Pacers, Monday, May 3, 2021, in Washington. (AP PhotoAlex Brandon)

“The energy, the intensity, the things the analytics don’t understand. The fierce competitiveness. What he instills in our younger players, there’s no analytics for that,” Brooks said about someone he also coached years ago with the Oklahoma City Thunder.

Beal credited the turnaround from a 17-32 record on April 5 to “our approach to the game, night in and night out” and explained: “We follow Russ on that.”

Brooks praised Westbrook for playing nightly “like it's Game 7” and called him the second-best point guard in NBA history, behind only Magic Johnson.

“He’s doing MVP-type things every game. And he’s an MVP winner every night, on the floor and off the floor,” Brooks said. “You can critique him all you want. ... He’s as high a level player as this league has ever seen.”

Westbrook's 13 points, 17 rebounds and 17 assists Thursday gave him his 34th triple-double of the season.

The performance helped Washington beat Toronto for the first time since 2018.

“He just does so many things in so many different ways, right? I mean, obviously the first thing you always think about is the freight train coming downhill 100 mph in transition. ... Then he’ll post you. He’ll kill you on the offensive glass. He’ll run pick-and-roll. Now he’s making 3-balls,” Raptors coach Nick Nurse said. “I’ve always been super impressed and loved his competitive spirit and just watching him play.”

Westbrook, who defines his job as “making others around me better,” objects to the notion that he is merely accumulating statistics.

“I honestly believe there is no player like myself," said Westbrook, who arrived in Washington via an offseason trade that sent John Wall to the Houston Rockets. “And if people want to take it for granted, sorry for them. But I’m pretty sure if everybody could do it, they would do it.”

Asked whether he contemplates how surpassing Robertson could affect his legacy, Westbrook responded with a hint of a smile.

“I don’t think about it. I actually just go out and have fun and hoop," he said. "And at the end of the day, when my journey is done and I'm done playing basketball, I can look back and think about some of the crazy stat lines — the good, the bad, the ugly — and be thankful for it all.”