Phil Mickelson went from planning to hit a draw away from the water to wondering if he should hit a fade that would bleed away from the bunkers toward the 14th green at Quail Hollow Club.

This was all part of the same swing thought. It ended up in the water.

Mickelson was 11 shots worse than his best score in nearly a year Friday, limping to the finish for a 4-over 75 in the Wells Fargo Championship. What mattered more was at least being in the mix. 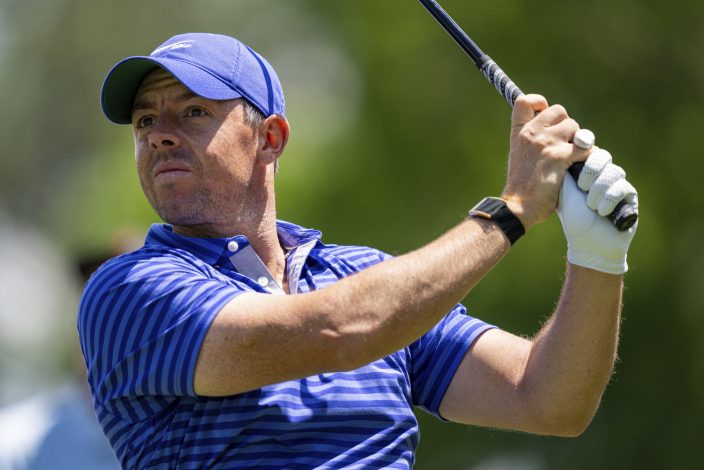 Rory McIlroy watches his tee shot on the third hole during the first round of the Wells Fargo Championship golf tournament at Quail Hollow Club on Thursday, May 6, 2021, in Charlotte, N.C. (AP PhotoJacob Kupferman)

“I'm excited to be in contention heading into the weekend, and I know I'm playing well,” Mickelson said.

So was Rory McIlroy, a two-time winner at Wells Fargo who has a certain comfort level at Quail Hollow. He had a 66 and will competing on a Saturday for the first time in two months.

McIlroy started the second round outside the projected cut line. He has not made it to the weekend since Bay Hill two months ago, which is factual and lacking context. That amounts to only three tournaments — missed cuts at The Players Championship and Masters, not advancing from his group at Match Play.

He turned it around quickly, starting with one of his few bad drives. This one on the 14th sailed well to the right of the bunkers, gallery, everything but the mansions just outside the property. He tried to land his wedge anywhere near the green, and just his good fortune, it trundled onto the putting surface and stopped a foot away.

That sent him to five birdies over his next eight holes, and he was two shots behind the early leaders.

“That was probably the catalyst to going on a nice little run,” McIlroy said.

Mickelson didn't have one of those. Everything felt and looked so easy when he opened with a 64. This was more of a challenge, particularly late in the round, and Mickelson felt his focus lapsing again.

Even the tee shot into the water on the 14th didn't hurt him — after a penalty drop, he hit a wedge just over the bunker and it rolled out 2 feet behind the hole, allowing him to escape with par.

But after another good tee shot on the par-5 16th, he wasn't quite sure what to do with his next one. He pulled it well right of the green, and his high flop shot landed too far and went over the edge. He chipped poorly to about 12 feet and turned what looked to be a sure birdie into a bad bogey.

Two holes later, he found the water on the par-5 17th for a double bogey.

“The back nine, I just wasn't sharp,” Mickelson said. “I think an example of what I've been talking about is on 17, we're standing over the ball and I'm changing my mind and I'm changing the shot, moving the clubhead a little bit. Instead of backing away and kind of refocusing, I just hit it and I'm not really aware of what I'm doing. So I've got to fix that.”

In his mind, he threw away two shots on both the 15th and 17th holes, the difference of a score at par.

“I just can't keep doing that,” Mickelson said. “I'm optimistic for the weekend, though.”

U.S. Open champion Bryson DeChambeau can't say the same. He hit two shots into the water on the par-5 seventh near the end of his round and made a triple-bogey 8. That sent him to a 74, and he left without wanting to talk. He was one shot out of the projected cut.

Woodland was all smiles. He missed the cut badly last week at Innisbrook, called Butch Harmon and decided to go back to his previous coaches, Harmon and Pete Cowen. It didn't take long for him to feel better. His hip isn't bothering him and his swing feels great.

Woodland still hasn't figured out the final stretch, Nos. 16-18, playing them in 3 over through two rounds. But he likes where he's headed.

“I’ve seen some shots this week that I just haven’t seen in a long time,” he said. “The golf swing feels so much better. Confidence has gone way up, which I did not have really in the last year. ... It's exciting right now.”

Mitchell goes bogey-free at Quail and leads McIlroy by 2

Blast from past as Mickelson opens with 64 at Quail Hollow